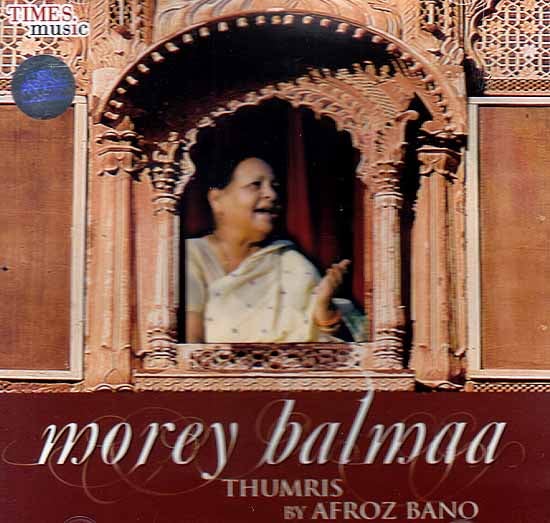 Thumri is the most poetic form of Indian classical music. Deriving its content from the Krishna cult, it expresses the emotions of devotion, mystical love and viraha, (the pain of separation). Thumri is believed to have originated in the nineteenth century court of Wajid Ali Shah of the city of Lucknow, himself a poet and a great patron of music and dance. In his court thumri flourished alongside kathak dance, the association between the two is still strong today. The changes in the political situation led to the development of two strains of thumri the one under the patronage of the landlords of Lucknow, and the other one in Benares. Historically, courtesan culture played a major role in the development of thumri in its original form, as a text expressed through the emotive combination of song and dance. This association, of course, gave thumri a somewhat ‘disrespectful’ place in the musical world when political and social climates changed within India and the view of courtesans was altered from their previous respect as the continuation and sustenance of artistic growth to an improper’ facet of Indian culture.

The status of thumri as a light classical music form is misleading. For thumri, the voice must be absolutely flexible and the singer must have a thorough grounding in the rudiments of raga music in order to tackle the skilful ornamentations required for its full effect. Musically the origins, as with all forms, can be traced back to folk music. Although ragas and taalas associated with thumri are loosely aligned to folk music, the structure retains the classical compositional form.

The language of the text is usually brij bhasha (i.e. the language is spoken in a particular province of Uttar Pradesh and is associated with the legends of Krishna). The mood is shringarar (romance) rasa, but the songs deal with romantic love as symbolic of spiritual love.

This recording features one of India’s most popular exponents of thumri, Afroz Bano. Gifted with a powerful voice, which has mellowed through sustained riyaz (practice), she is recognized for her ability to sensitively interpret the range of emotions demanded by the text of the poems that she sings. Her tremendous popularity has led to concert appearances at all the major music conferences in Indian including the Saptak Festival, an annual treat of music held in Ahmedabad, Gujarat. She received her taalim, (musical training) from the eminent brothers Faiyaz and Riyaz Ahmed Khan, Khyal exponents belonging to the Jaipur gharana. Later as her career developed she received guidance from vocalist and teacher Abdul Rehman Khan.

As well as thumri, Afroz Bano is equally adept in the styles of Ghazal (Urdu poetry set to music), Bhajan (devotional song) and Rajasthani Mand (Folk music of Rajasthan).

There are specific ragas that are more suited for thumri, like Pilu, Khamaj and Bhairavi. These ragas help the artist to express the romantic nature of the art form while giving scope for intricate ornamentations which give the style its distinctiveness.

In this concert performance, recorded on 5th January 2003, Afroz Bano has sung five compositions all based on established ragas. However in thumri there is an accepted artistic license to introduce notes from outside the structure of the raga to add effect. This identifies the ragas as being mishra (literally mixed). This treatment is not accepted in khayal singing.

For this recital Afroz Banu has chosen the traditional thumri accompaniment of Sarangi, Tabla and Harmonium. The bowed Sarangi is the most accurate instrument to imitate the subtle vocal nuances of the thumri style; its haunting effect also helps to maintain the mystical atmosphere created by the singer. Tabla accompaniment is provided by Hidayat Khan one of the great masters of Indian percussion. Thumri accompaniment is a special art which requires at times simple rhythmic support and in contrast the application of the ornamental laggi towards the finale, a part of the table repertoire played in fast speed. In the laggi the rhythm is displaced to other parts of the beat, creating variations which imply differing accents and utterances. The recital concludes with a thumri based on Raga Bhairavi, one of the ancient ragas of Indian music traditionally kept for the conclusion of the programme.

Afroz Bano is gifted with a powerful but mellow voice and expresses beautifully the emotions of devotion, mystical love and the pain of separation found in Thumri, the most poetic form of Indian classical music.