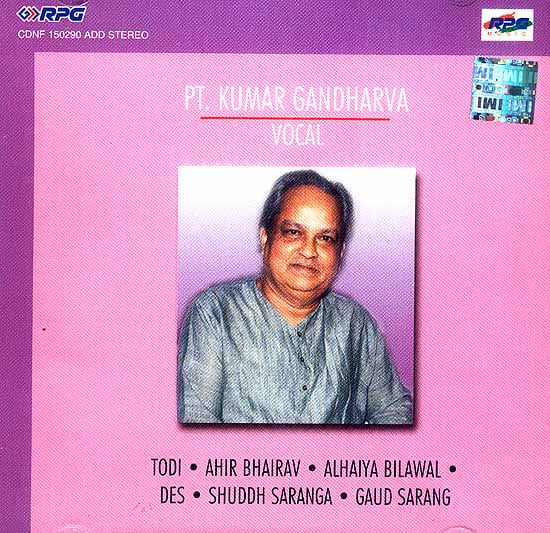 Bron on 8th April 1924 Shivputra Siddharamayya Komkali, alias Kumar Gandharva (prophetically titled at age of seven by Shrimad Shankaracharya) Made his debutin a music conference at Bombay in 1935. On This occasion the 11 year old child prodigy overwhelmed the audience with his display of precise imitation of stalwarts of those days like Ustad Abdul karim Khan, Ustad Faiyaz Khan and Vazebuva.

After a brilliant beginning as a singer, ill health compelled him to leave Bombay and retire to Dewas. In was during these long years of solitary confinement in in bed that he fully discovered his true genius and emerged as one of the most inventive and versatile singers of the presentg century.

He received his initial training in the earlier day from Prof. B.R. Deodhar of Bombay, an exponent of Gwalior Gharana. Listeners perceive in his classical exposition a blending of three gharanas-the flow of Gwalior Gharana, the melody of Kirana Gharana and intricate play of layakari of Jaipur Gharana.

The Genius of kumar Gandharva had an all pervasive character. Whatever he Sang carried the unmistakable Kumar "mystique" that truly made him a colossus who strode the musical stage for more than half a century.

In this album the maestro presents two ragas of the afternoon Sarang group. Other ragas are Todi, a hugely popular morning raga Ahir Bhairav- combining the purab anga of Bhariav with the uttar anga of Kafi, the rarely heard yet rich morning raga Alhaiya Bilawal and the evergreen, celebrated Des.

The Sarang is an exquisite extract from the Kafi scale -featuring Sa Re Ma Pa and komal Ni fousing on the Re Pa Ma Re by taking the Tivra Ma in ascent, and balances it with Ni Dha Sa Ni Re Sa -all Shuddha. Gaud Sarang is sometimes called morning Begag So similar can taans in teh ragas be. The patterns in this raga are Ga Re Ma Ga Pa Re, Pa Ma Ga Ni Re Sa and Ga Ma Re Ga -Giving the raga its characteristic zig -zag lines.