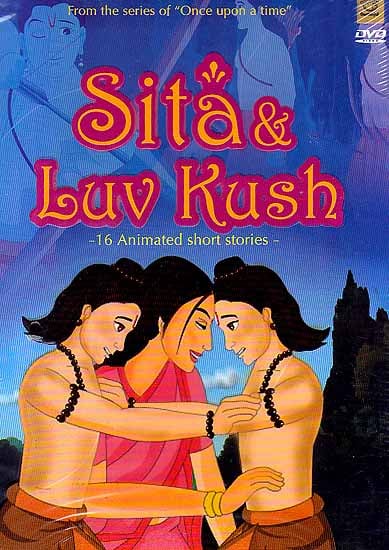 From the Series of "Once upon a Time".

Lav and Kush were the legendry sons of lord Ram and Sita. They inherited their father’s bravery and mother’s good looks and charm. In this DVD we learn about their birth and their idyllic childhood years in the forest where their mother had been sent in exile by their own father. It also tells the tale of how Ram was reunited with his sons through the Ashwamedha yagna that he performed. The brave twins fought the whole army of Ayodhya and this brought them to the attention of Lakshman. Who later led Ram to them. Finally it tells the touching tale of how Sita gave up her life and left them with their father.

In the story of the Ramayana the character of Sita needs no introduction. The adopted daughter of king Janaka she grew up to become a beautiful princess and later the wife of Lord Ram. Throughout her life she faced many trials and tribulations. It was when Ravana kidnapped her and took her to Lanka that the epic battle between Ram and Ravana broke out. Sita remained steadfast in her devotion to Ram throughout her life. She proved her chastity and virtue time and again but finally gave her life and again but finally gave her up life and returned to the arms of mother earth from where she was born. This DVD contains many exciting stories from the life of the noble goddess Sita.