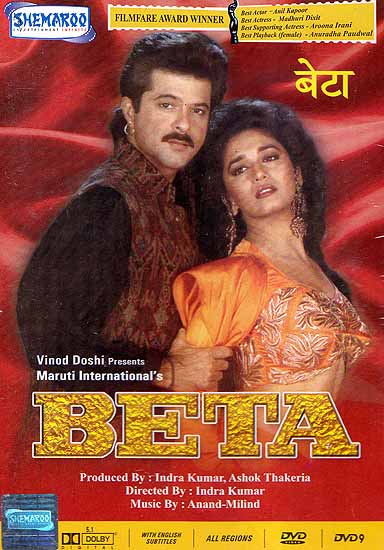 The Son: Featuring the Most Sensuous Song Ever Filmed on the Beautiful Indian Actress Madhuri Dixit (Hindi Film DVD with English Subtitles) (Beta)

Raju, lonely child has everything in life except a mother. His mother died when he was very young. He missed his mother immensely more when he saw his friends being loved by their mothers. The child’s loneliness disturbed the father and he decided to get married again so that his son gets lobe and affection of a mother. Unfortunately, the lady (Nagmani) who got married to Raju’s father was not a lady who would take care of the child or love him-but a lady whose ambition was to take over the compete control of wealth and the property of the family. She knew that Raju was the sole heir to the wealth and property and he can only transfer the same to anybody only after his marriage and with the consent of his wife. To fulfil her wicked dream, she keeps him uneducated and traps him in her web of fake love and affection, she succeeds and Raju starts looking up to his mother as his God. When Raju grew up, the mother fixed up his marriage with illiterate girl, so that she would succeed in her wicked plans. Destiny had something else in store. Raju gets married to a lovely and an educated girl Saraswati who understands each and every move of her mother-in-law. At every step she safeguards the interest of her husband. Mother tries to separate the couple but does not succeed. The frustrated mother decides to eliminate Saraswati mixing poison in a glass of milk. Saraswati came to know about this and she told her husband Raju. To prove his mother’s innocence, Raju drinks the milk. Could Raju be saved? Did the change? See “Beta”,