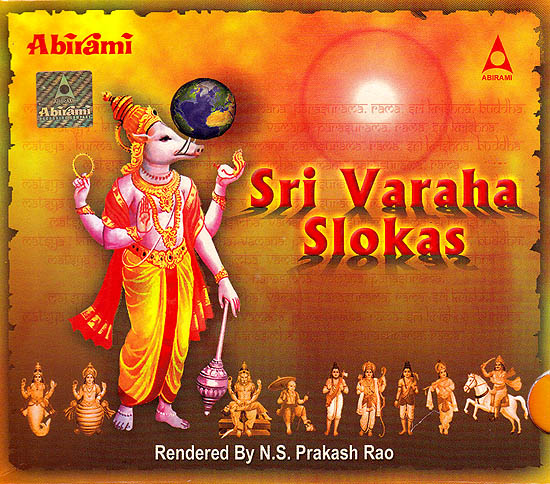 The supreme enjoyer of all sacrifices accepted the incarnation of a boar for the welfare of the earth. He lifted the earth from the nether regions of the universe.

When the unlimitedly powerful Lord Assumed the form of a boar as a pastime, just to life the planet earth which was drowned in the great ocean of the universe called Garbhodaka the first demon (Hiranyaksa) appeared and the Lord Pierced him with the tusk (Srimad Bhagavatam 2.7.1)

When her child falls in a well the mother because of excessive parental affection (Vatsalya) jumps in and saves it. Similarly when earth (prthivi) was sinking in the underworld the lord took the form of a boar and in the twinkling of an eye dived in and brought her out. (Sri pillan’s Tiruvaymoli 7.5.5)

To rescue the earth he appeared during the Svayambhuva manvantara from Brahma’s nostril and during the Caksusa manvantara, he appeared from the water. Lord Varaha the best of tusked beasts appears to kill Hiranyaksa and rescue the earth. Sometimes Varaha is a wild animal of the forest and sometimes he is a domestic animal. Sometimes he is dark as a raincloud and sometimes he is as white as the moon. In this way smrti sastra describes two gigantic forms of Lord Varaha the form of Vedic sacrifices Maitreya Muni described Lord Varaha’s pastimes at two different times as if they happened at the same time