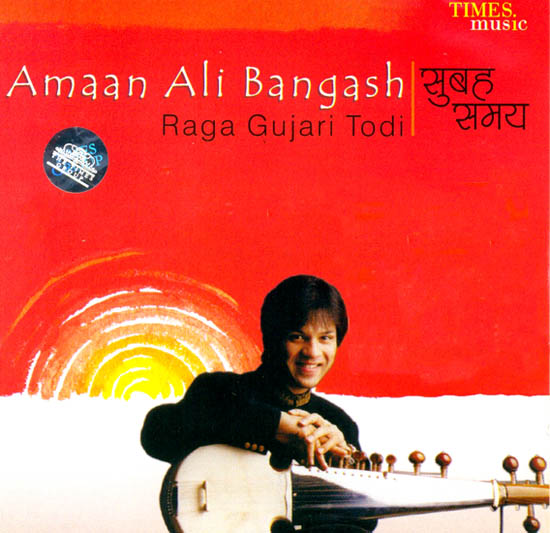 A young talent of the 7th generation in an unbroken chain of the Senia Bangash School, Amaan Ali Bangash is the elder son and disciple of the Sarod Maestro Amjad AIi Khan and grandson of the Haafiz AIi Khan. Initiated into the fine art of Sarod playing at a very tender age, Amaan began his public performances as early as eight.

Accompanying his father to various music festivals in India and abroad, he has today, carved out a niche for himself. His performances have evoked creditable applause. His precision in tunefulness and his bold and resonant strokes are all pointers to importance of tradition and continuity in Indian Classical Music.

He made his debut abroad in 1986 at the Festival of India in Moscow. In 1990, Amaan performed at the Logan Hall in UK and at the Asia Society in 1991 in New York. Today, Amaan is considered as one of the finest young Sarod players and has attained a very special place for himself to all music enthusiasts. Amaan has been a regular performer at Palais beaux-arts in Brussels, Carnegie Hall, Chicago Symphony Center, Esplanade in Singapore and Kennedy Center in USA, Royal Festival Hall and Barbican Center in UK. In addition he has performed for the Temenos Academy at St. James Palace in London for HRH Prince of Wales. More recently he performed at the Summer Arts Festival in Seattle and the Edinburgh Festival in UK. Amaan's Australian Tour this year included his performances at the World Beat Festival in Brisbane, Taranaki in New Zealand, Woman Rivermead Festival in UK, Opera House in Sydney and the Womad Festival in New Plymouth and Adelaide. Amaan performed with Cellist Matthew Barley and the National Youth Orchestra of Great Britain in July 2002 along with a series of workshops. This year Amaan performed at Highgrove for His Royal Highness Prince Charles for the third time in UK.

Awards and accolades came his way early in life. He personally believes that his work will speak for itself and is determined to pursue his family's inheritance and legacy. In October 2002, he received Provogue Society's Young Achiever's Award for Performing Arts.

Amaan has created a niche for himself as a musician and has several music albums to his credit. In November 2002, Amaan co-authored a book titled 'Abba-God's Greatest Gift To Us' on his father's life. Roli Books, Lustre Publications under the family pride series, published the book.

Amaan, beyond playing the Sarod, also anchored Top Drive, the all new television series on Star World that was aired from January end 2003 for five episodes. Amaan has recently released an album 'Strings Attached' recorded live at Royal Festival Half, London along with Matthew Barley and Ayaan. In May 2003, Amaan gave a joint concert with his brother for the Temenos Academy for Prince Charles at his High Grove Estate. The Songlines World music magazine on reviewing his latest solo recording titled Amaan stated "worthy heir to his father’s crown."

Sentiment is the soul of music and it is not only melodies but also each of the seven notes is credited with particular rasa'. Different moods are therefore attributed to different ragas. The magic and appeal of Subah Samay come from combined effect of varying degrees of consonance and dissonance of notes used artistically in varying tempo, sequences and rhythm generating emotions and sensations of morning delight. The magic of morning raagas lies in rendering majestic rhythms of nature, in her ebb and flow. The aesthetic pleasure which it gives and the divine appeal that it carries can hardly be measured by any criterion of relevance. It is an art of a very high order.