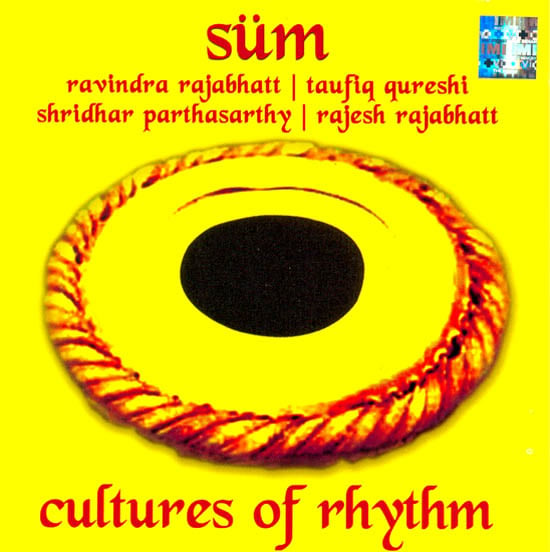 Rhythm is the signature of Time. This concept is explored in this album where only percussion and acoustic instruments play in harmony creating its own unique melody.

Ravindra Rajabhatt: son and disciple of Hazarilal Jaipurwale, Kathak exponent of the Jaipur Gharana, collaborate with the best percussionists in the field from the two systems of Indian music from the north and south.

Taufiq Qureshi: a renowned percussionist and the brother of the famous Zakir Hussain and son of Ustad Alia Rakha.

Shridhar Parthasarthy: the Mridangam artiste represents the intricacies of the Carnatic system.

Rajesh Rajabhatt: a versatile artiste of many skills is the son and disciple of late Pandit Hazarilal Jaipurwale".

This foursome has given birth to an instrumental group called Sum.

1: Aashirwaad (00:32) The traditional commencement with OM seeks the blessings of the guru.

2: Rhythm in Time (08:23) Three parallel concepts underlie this piece making it unique in its own way. The instruments are presented chronologically, beginning with the damaroo, the most ancient, and followed by pakhawaj, mridangam and the modern tabla. The listener experiences the rhythmic pulse of India as the drummers demonstrate the typical beats played by folk and classical musicians around the country. Thirdly, this piece represents the Creation of the Universe and elements of Nature. The beginning is played on the lower side of the Pakhawaj leads to a crescendo and ends with the voice demonstrating the element of 'air'.

3: Movement (08:12) As dawn breaks and the first rays of the sun play on the waters of the holy Ganga, the Nagadal Saadhus (saints) are the first to take a dip during the Kumbh Mela. They recite Sanskrit verses in the form of'Richa Gaan' playing to the sound of Marimba. As the day progresses, groups of Sadhus head towards the river. Wave upon wave of 'Om Namah Shivaya' rises to the heaven as one voice as this holy congregation chant in unison. This composition is in 13 beats.

4: Tandav (06:48) The concept of this piece is the Tandava dance by Shiva as Nataraja. Shiva Tandava Stotra attributed to Ravana (a demon king) is recited here by Ravindra and Taufiq in Tisra Jaati. A solo on Toms and Timbales by Taufiq is followed by Pakhawaj by Rajesh and Mridangam by Sridhar. This composition by Taufiq Qureshi is in Misra Jaati.

5: Journey (05:12) Five friends begin a train journey and are drawn to the rhythmic sound of the train running on the tracks. Their drums debate on charms and beauty of the five Jaatis. At the end of the journey, the friends realize that each has its own place is the scheme of music. The 'discussion' culminates in a harmonius'agreement'. A lighthearted composition, which introduces the essence of Indian rhythmic concept of Jaatis , Chatursha (4 beats), Khanda (5), Tishra (3), Mishra (7) and Sankeerna (9). The "Halgi" played by fingernails is used here to show the sound of the running train.

6: Tabla Tarana (09:30) Tarana is a musical form used by vocalists. This composition was composed by Pandit Laxman Prasad Jaipurwale and conceptualized for this album by Ravindra. The piece begins with a solo tabla display of 9 beats followed by Tarana , an adaptation by percussion instruments. The recitation of 'bols' are by 'SUM'.

7: Rhytharmony (08:14) Rhythm is not merely staccato tapping but has intrinsic harmony. This composition by Shridhar is in 7 beats and uses the 'Madal', which has melodic notes. The musical notes are changed by pakhawaj, mridangam, halgi, and tabla. This improvisational theme induces rhythmic relaxation to the listener.

8: Raindance (10:37) The rumbling of jungle drums is heard echoing across miles of African country- side, expressing joy and sometimes, sorrow. Here the farmers send a prayer heavenward hoping the rains will quench the parched earth and thirsty people. A tribute to the great African continent where rhythm is the heartbeat of the people!