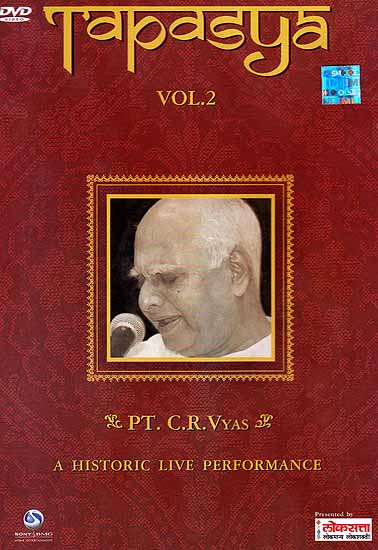 If Hindustani classical Music is all about tapasya then there cannot by any greater trapasvis in Khayal gayaki than Pt. Bhimsen Joshi, Pt. Jasraj and Pt. C.R. Vyas.

This album is a recording of Tapasya the landmark concert of 2001 in which Hindustani classical legends Pt. Bhimsen Joshi Late Pt. C.R. Vyas and Pt. Jasraj cam together for the first time to enthrall audience with some spellbinding vocal performances. The coming together of the trio was truly a momentous occasion as they are easily the best and the senior most from their respective gharans. With Pt. Bhimsen Joshi (Kirana). Pt. Jasraj (Mewati) and Pt. C.R. Vyas (Gwalior) taking the stage one after the other one realized yet again the diversity in styles yet unity in approach of our various gharans.

The musical world was robbed of a performer and scholar of the very highest quality when Pt. Chintaman Raghunath Vyas, known to music lovers as simply Pt. C. R. Vyas, passed away on the 10th of January 2002. Pt. C. R. Vyas was born in 1924 in the Osmanabad district of Maharshtra, into a family of traditional kitten singers. He benefited, in the course of his musical training, from the guidance of a number of outstanding artists belonging to three different gharana traditions. His first teacher was Pt. Govindrao Bhatambrekar, who introduced him to the Kirana tradition. Subsequently he learned from Pt. Rajarambuva Paradkar and his guru Pt. Yeshwantbuva Mirashi, distinguished performers of the Gwalior gharana. Pt. C. R. Vyas is best known, however, as the disciple of yet another musician, Pt. jagannarhbuva Purohit. Pt. Purohit, a follower of the Agra tradition he had absorbed from his mentor Ustad Vilayat Hussain Khan, was regarded as an outstanding composer (under the pen—name ‘Gunidas’) as well as a performer.

Pt. C. R. Vyas was highly respected as a performer, scholar and composer (in honour of Pt. Purohit, Pt. Vyas adopted the name of ‘Gunijaan' for his own compositions). His achievement was recognized in the form of prestigious awards such as the Padma Bhushan and Sangeet Natak Academy Award, which belies the fact that for most of his life he held regular employment and pursued music in his free time, his musical career and public recognition only flourishing towards the end of his life. His approach was scholarly and emphatically classical without being excessively austere, his performances always absorbing and approachable. The current recording is a great illustration of his ability to speak to the most discerning of listeners while also appealing to a wider audience, and of what a master we have lost.

Shuddh Kalyan is a raga of the early night which is closely related to Raga Bhupali. It is regarded as part of the large - Kalyan family, although the name is a little misleading - there is no historical evidence to suggest that this is the original or 'pure’ form of Kalyan. The greater part of any performance in Shuddh Kalyan is in fact confined to Bhupali’s pentatonic scale: Sa Re Ga Pa Dha (1 2 3 5 6) (Sa in this performance is approximately a Western C#) Two additional pitches are available - tivra Ma and Ni (4# and 7) - which combined with the basic five notes add up to the full 7-note Kalyan thaat (scale). These tend to occur in descending lines, between Pa and Ga and between Sa and Dha respectively: in some performances they can be heard distinctly, while on other occasions (or in other interpretations) they are touched so subtly or so rarely that they might be missed. Pt. Vyas’s treatment here is subtle, but the additional notes — especially the Ni - are sufficiently clear for the raga not to be confused with Bhupali (Pt. Vyas in fact sings the Ni clearly in his sargam taans in the passage beginning 25’50"). There are other rather delicate touches, such as the slightly flat intonation of the Ga, which hint at an affinity with Yaman Kalyan.

The best place to listen out for these melodic subtleties is of course the alap with which Pt. Vyas begins this presentation. This is followed by a slow composition set in vilambit ektaal, a metric cycle of 12 beats played at a slow tempo and each subdivided in two by the tabla (the first beat sam falls at 0’05,0’45”,1’23” and so on). The development phase is delightfully fluid in its shifts through bol alap into the antara phase (the sustained upper Sa around 12 minutes is hard to miss!), on through sargam to different varieties of taan — aakar taans (including some terrific gamak after around 30’), bol taans, sargam taans — to passages of bol bant (where the text is treated syllabically, rather than merely initiating aakar-like taans as in bol taan).

The second bandish (composed by Panditji himself) is in a brisk teentaal (16 beats) with a punjabi-like lilt. As in the vilambit section Pt. Vyas makes excellent use of his harrnonium and vocal accompaniment, using his support singers to repeat the composition’s mukhra (refrain) between his taans, some of which are imitated on the keyboard. This concludes a performance to delight both the connoisseur and the occasional listener.

Scale: Sa Re Ga Ma 'Ma Pa Dha Ni (1 2 3 4 4# 5 6 7) Bihag is a popular and well-known night-time raga. It uses a heptatonic scale, with both natural and sharp fourth degrees (Ma shuddh and tivra). Both Ma-s feature in. the prominent vakra (oblique or crooked) movements such as ...'MaPaGaMaGa. . .(4#5543: a nice passage of sargam at around 9 minutes illustrates several possibilities). Re and Dha (2 and 6) are omitted from ascending lines and weak in descent, while Ga and Ni (3 & 7) are the most prominent notes: the parallel phrases GaMaGa~(Re)Sa and NiSaNi—(Dha)Pa are quite distinctive, the latter forming the focal point of Pt. Vyas’s teentaal composition on this recording.