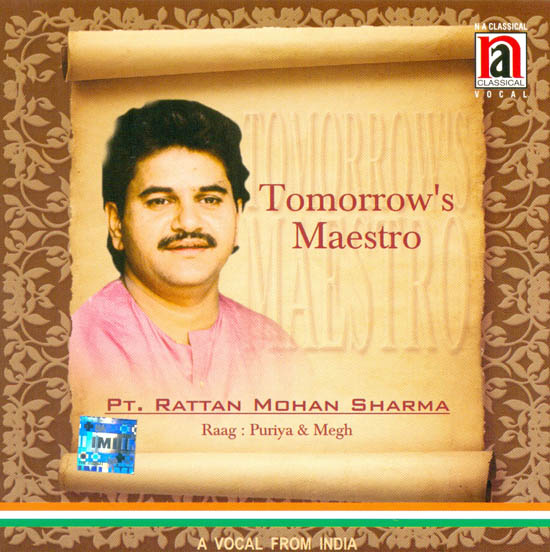 Pt. Rattan Sharma is a protege of the illustrious Mewati Gharana whose stalwarts include his late grandfather Pt. Motiramji and his uncle, Mahamahopadhyaya Pt. Maniramji, Sangeetacharya Pt. Pratap Narayanji and Sangeet Martand Pt. Jasrajji. Rattan himself is a Pt. Jasrajji. He is the honoured recipient of Shankar Rao Vyas Award for having stood first in the All India Sangeet Visharad exams conducted by the Gandharva Mahavidyalaya and “Sangeet Martand Pandit Jasraj rotating trophy” installed by Rotary Club of Bombay – Shivaji Park for the year 1996. Rattan is a graded artiste of All India radio and has several performances on Doordarshan and All India to his credit. Rattan has many private and public performances to his credit, notable ones among them being concerts for the India Music Group. The Swami Haridas Sangeet Sammelan Bombay & Vrindavan, Apna Ustav – 1986, National Centre for performing Arts (NCPA). The Megh Malhar Festival, Nehru Centre – Mumbai, The Sankat Mochan Sangeet Samaroha – Benaras, The Pandit Motiram Sangeet Samaroha – Delhi, The Chaturang sammelan and Saptak – Ahmedabad. Certain very well received performances of his include Jugalbandi performances with Carnatic Vocalist. Besides this, rattan has also given successful performances in Haveli Sangeet and Rajasthan Folk and recorded for Fusion groups like Disrhythmia abroad. He travels extensively for concerts and has visited England, Dubai, Sharjah, Mauritius, U.S.A. and Canada in this regard. Rattan is under the continuing tutelage of Sangeet Martand Pandit Jasrajji.