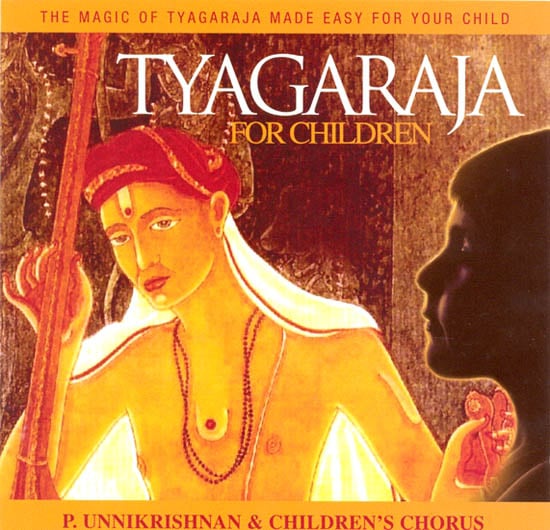 Tyagaraja (1767-1847) is the most influential composer of Carnatic Classical Music. While his magnificent compositions continue to be included in Carnatic performances of today, an appreciation of Tyagaraja is still very limited among children on account of the complexity of the works. This unique album is specially customized to aid the appreciation of Tyagaraja’s magical compositions among young listeners in two ways – Maestro P. Unnikrishnan’s renditions are simplified to make it possible for the children’s chorus to sing along and the musical arrangements are deliberately made contemporary to inspire the young. In sum, it is a project devised to motivate young listeners to appreciate Tyagaraja’s brilliant works and thereby understand the essence of Carnatic Music.

Tyagaraja was one of the greatest and the most influential composers of South India Classical Music. He along with Muthuswami Dikshitar and Shyama Shastry are considered the trinity of Carnatic music. While his contemporaries were primarily involved in glorifying music from the past, Tyagaraja did the same along with pioneering new musical concepts that form the roots of Carnatic Music. Apart from being a wonderful composer, Tyagaraja is also renowned for his profound lyrics that bring to light his deep understanding of the Vedas and the Upanishads. He composed thousands of devotional compositions, including the Pancharatna Krithis (‘five gems’), which remain very popular even today.

P. Unnikrishnan is considered by many as one of the leading torch bearers of Carnatic Music. Apart from winning several awards for his involvement in Carnatic Music, he has also won the National Award for his playback singing, Unnikrishnan is actively involved in performing Carnatic concerts around the world.

In ‘Tyagaraja for Children’, Unnikrishnan has teamed up with a group of children to create a unique album specially aimed at today’s youth to help them appreciate the essence and beauty in some of Tyagaraja’s greatest compositions. Music director S. Jaykumar keeps all compositions and tunes intact and maintains the authenticity in lyrics and diction while providing a contemporary fresh feel to the overall experience. The beauty of the album lies way the children’s chorus have smoothly repeated Unnikrishnan’s lines in harmonic, making it a one-of-its-kind album.