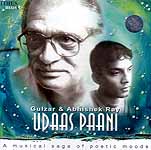 My mid is often possessed by dreams, dreams that transcend all barriers enforced by custodians of the real world. Some of my compositions based on Indian Ragas were long wanting to express their emotions with freedom and to see the light of a new day. Gulzar Sahab appreciated my idea and shared his precious treasures of poetry with me. The expressions of poetry and music fused smoothly with one another creating magical moods.

I played and sang my compositions on Ragas, arranging them with elements of world music and forms of contemporary orchestration. I wanted to make Indian classical music more acceptable, exciting an palatable for the youth and the common man. What emerged out of my studio was neither music nor poetry; it was a collection of inexplicable moods and of surreal images painted on a canvas of sound.

Abhishek Ray has been composing music for televisions since his school days. He learnt about the treasure of Ragas and Raginis from both parents who are trained in Hindustani classical music. Simultaneously he took professional training in piano and western classical music from an early age. Alongside music, Abhishek graduated in physics from Delhi University, which enabled him to understand the subtler aspects of better sound. Then, after completing his masters in computer applications, he set up his own computerized recording studio in Delhi. Today he has his hands full composing, singing and arranging his own music for feature films, albums, TV etc. His background enables him to seamlessly fuse elements of Indian classical and world music giving rise to fresh melodies and rich, uncommon orchestrations.

Poet, lyricist, writer, film maker – Gulzar has created some of the most beautiful moments for all of us to enjoy.

His inherent love for music and poetry, evident even as a child was influenced by a number of people, Tagore, Sarat Chandra and Jibananda Das, being the chief among them. However as he grew up he came in contact with the works of geniuses such as Ghalib, Mir and Faiz Ahmed Faiz and his poetry developed the pure, evocative silence and sensitivity that is so unique to Gulzar.

He has written in English, Hindi, Urdu and also Bengali, a language he perfected because it intrigued him. His poetry paints pictures of pain and loneliness, love and life; it deals with the multitude of emotions present in the realm of human relationships. Not just his poetry but also his scripts and lyrics lead the listener into what he calls a state of realization. It is probably his understanding and interpretation of human relationships that make his writings so very beautiful.

A man with several matchless facets, he was written the scripts for many landmark movies, published several collections of poems and short stories and is the recipient of several prestigious awards. His tryst with poetry is an unending affair filled with passion and love for his creative pursuits and today he continues to explore the unknown realms of lyrical beauty as fervently as ever.