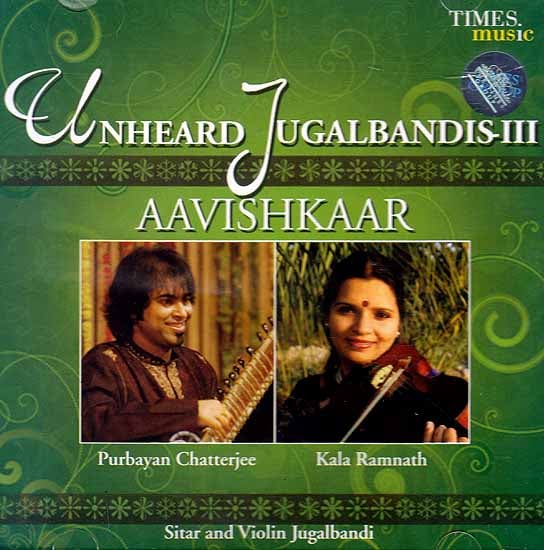 Two Leading lights in the field of North Indian classical music have been brought together in an exciting collaboration to perform in the tradition of Jugalbandi or Due Playing individually both Purbayan Chatterjee and Kala Ramnath Demostrate through their music a maturity which belies their age able to combine technical brilliance and virtuosity of the highest level with depth and serenity. They represent a new generation of artists suggesting an exciting future for all genuine Indian music lovers Jugalbandi (lit tied together) is a relatively under explored concept through which two artists share a musical canvas striving to present a single picture while exploring each other’s depth of creativity.

Purbayan Chatterjee comes form a family steeped in the classical music tradition. His father and guru Partha Chatterjee is a distinguished sitarist in his own right having achieved the status of a highly respected teacher and performer in Europe and USA as well as India.

He had the great fortune to study extensively with one of India’s greatest musician Nikhil Nannerjee who holds a profound influence on Purbayan’s playing is an aesthetically satisfying combination of the best facets of Dhrupad and Khayal North India’s two greatest classical vocal forms. The discipline and richness of the Dhrupad form is interspersed with the exuberance and lyricism of Khayal.

Kala Ramnath was born into a family of prodigious musical talent which has given Indian music such violin legends as Prof. T.N. Krishnan and Dr. N. Rajam. Kala’s genius with the violin manifested itself form childhood under the watchful eye of her grandfather Vidwan Narayan Iyer. Simultaneously she received training form her aunt Dr. Smt. N. Rajan for the past eleven years by Mewati vocal maestro Pandit Jasraj.

Absorbing all these influences Kala has successfully developed a style of playing that is truly unique and has played a huge part in bringing Violin into the mainstream of Indian classical music. Though her improvised phrases are often complex she never loses sight of the lyrical side of her music her violin playing characterized by an elegant tone combined with an immaculate bowing technique.

Subhankar Banerjee is one of the most popular tabla artists on the Indian music scene. His playing combines technical mastery with creativity and his popularity can be gauged by the fact that he has already featured on more than one hundred commercial recordings. At the age of five he was placed under the tutelage of Shri Swapan Shiva, celebrated artiste and teacher of Farukhabad Tabla Gharana. There are six recognized distinctive styles (gharana) of tabla playing in North India and over the years Subhankar has dedicated himself to the study of other gharanas form different maestro.

For this recording Purbayan and Kala have chosen to play Raga Kedar an evening raga steeped in tradition and highly appreciated by Indian music lovers and connoisseurs alike. Named after Lord Shiva Kedar Consists of complex melodic gestures making it a huge challenge for instrumentalists in particular. The performance begins with the slow meditative Alap played in an unhurried manner, serving to introduce us to the main melodic phrases which bring out the personality of Kedar.

The first composition (track 2) written by Kala Ramnath has a beautiful melodic lilt and is set to vilambit jhaptaal a slow rhythmic cycle of ten beats. The tempo chosen for the performance reminds us of those preferred by the great vocal masters of previous generations. This is followed by a traditional composition (track 3) set to a medium paced teentaal a sixteen beat rhythm. Tarana is a compositional form based on the vocal style of singing meaningless syllables based on the repertoire of tabla and kathak vocabulary. Phrases like ‘Tana Dere Na Dim’, ‘Na Der Dani Ni’ are sung in a lively rhythmic fashion. In this instrumental interpretation of Tarana in the romantic Raga Bageshri (track 4) both artists trade improvised passages of immense beauty which flow seamlessly form their instruments. This recordings demonstrates the great potential of Jugalbandi playing and is hopeful the first of many rewarding collaborations.

Purbayan Chatterjee is one of the most promising sitar players in India and this sumptuous duet with the superb Kala Ramnath on Violin is emotionally expressive vibrant and delightfully exciting…everything a good Indian classical duet should be.