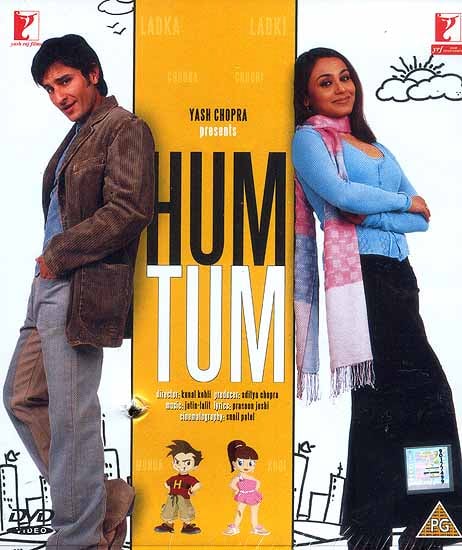 We and You: A Refreshing Look at the Eternal Battle Between the Sexes (Hum Tum) (DVD with English Subtitles)
Email
Whatsapp
Facebook
Pinterest
Twitter
Copy link

Life is not always like the movie. Love isn’t always at first sight. Very often, a relationship develops slowly and it takes many years between “boy meets girl” and “boy gets girl”

Hum Tum is a refreshing look at the eternal battle of the sexes as it follows the lives of Karan (Saif Ali Khan) and Rhea (Rani Mukerji). Karan is a cartoonist and his characters “Hum” and “Tum” reflect his perspective on the strange love-hate relationship between men and women. Rhea is sensitive, well bred and self-confident. She can give as good as she gets and is not afraid of standing up to men.

Initially, the two have very little in common. But, as life would have it, their paths keep crossing and, over the course of a decade, their relationship evolves, from hate, to mutual respect, friendship and finally…

In a cinematic universe that offers simplistic scenarios to the complex relationship between men and women, Hum Tum is a novel look at the trials and tribulations of “every man” and “every woman” and their attempts to understand one another.