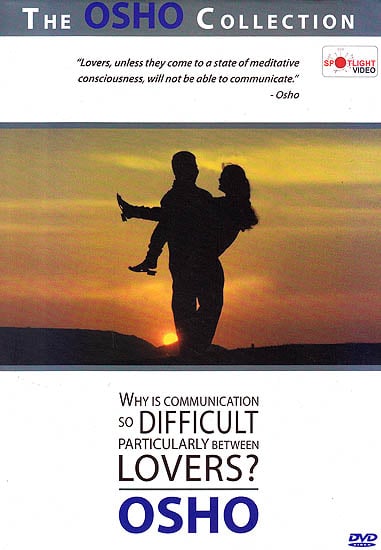 And when two minds try to communicate as for as the ordinary mundance things are concerned there is no difficulty.

But the moment they start moving beyond things into the world of concepts communications starts becoming more and more difficult.

For example Gautam the Buddha does not have any God in his philosophy. He is far more free from God than even Frederick Nietzsche.

At least Frederick Nietzsche states that God is dead. The implication is clear that is used to be alive now it is dead.

Gautam Buddha does not talk about God at all. It is so irrelevant that he does not pay any attention to the subject. Now to a Christian or to a Hindu or to a Mohammedan it is impossible to conceived of a religion without God. God is the center of Most of the religions.

Only three religions are free of God. One is Gautam Buddha’s another is Mahavira’s and the third is Lao Tzu’s.

When for the first time Christian missionaries came into contact with Buddhist scriptures they could not even conceive the idea that a religion could be without a god. What kind of religion will there be if there is no God? How are you going to pray? To Whom? Who is going to send his prophets and his only begotten son? Who is going to send saviors for you? Who is going to judge whether you are to be sent to hell or heaven?

How does he allow his disciples to address him as Bhagwan? The same is the situation with Jainism. They are even more strict about the absence of God. Buddha simply ignores the whole subject.

What Charles Darwin found two thousand years later was known to Mahavira, that it is not a creation, it is an evolving world. It has been here forever and will be here forever.

The whole concept of creation and a creator is just idiotic Mahavira was very strict; he did not want God in some disguise to pop up when he was gone just because people have a certain unconscious hankering for it. It gives a certain false consolation to people.

To avoid the false consolation is absolutely necessary if you really want to be consoled. If you authentically want to be at peace with existence, then all that is false and based only on belief has to be discarded. But again the problem -- the followers of Mahavira addressed him as Bhagwan. Now communication becomes difficult, because Bhagwan means a totally different thing to the Buddhists and the Jainas, than it means to the Hindus, Mohammedans, Christians, Jews. Their whole concept develops in a totally different way.

For the religions which are God-centered, God comes in the beginning, before everything.

He creates the world and nobody bothers from where he comes. If there was no world at all, how did he manage to exist and where? There must have been a small island, or some cloud -- something. God cannot exist in nothingness, and if God can exist in nothingness, then what is the problem? Why bring him in unnecessarily? Existence is perfectly good, autonomous, not dependent on a despot which you call God.

According to those who do not believe, he is whimsical, because for eternity he just remained silent What was he doing? Smoking? Taking drugs? Or just dreaming? Sleeping? In a coma? What is the situation? -- because according to Christians he created the world only six thousand years ago.

And six thousand years is such a stupid idea, because India has scriptures which are far more ancient than the Christian God.

Back of the CD

Osho is one of the most important contemporary mystics of our time known for his revolutionary contribution to the science of Inner transformation he inspires millions of people from around the world with his message of transformation through meditation.

Communication between human beings is difficult because we have being conditioned in different ways. When we get into the realm of couple relationships the situation gets even more complicated due to different functioning of female and male minds. Osho says lovers unless they come to a state of meditative consciousness will not be able to communicate their communication will always be a conflict. It will never be a communion. The only possibility is that consciousness of both of them envolves to a point that it goes beyond mind then all conditioning are left behind.