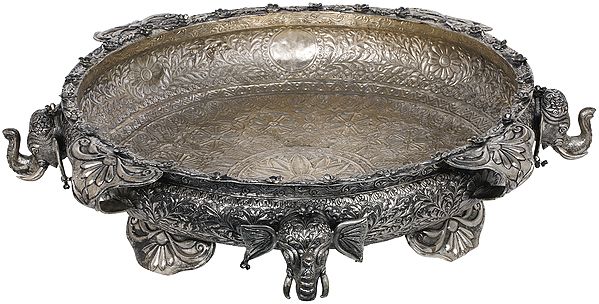 In ancient times Urli or Uruli was used at homes for cooking food or in Ayurveda for making medicines. Urli made of copper, clay or bronze are considered to be the best and a worthy purchase. As the times have changed, and with the development of new technology and utensils, urli’s now are used more as a decorative ornamentation to be kept at home, office or reception desk; filled with water and floating flower petals, they are placed in halls or other places as a part of decoration.

The large sized urli shown here is filled with intricate floral patterns all over the circumference and a stylized flower band at the brim enhances the minutest beauty of this statue. Apart from being an ornamentation, this urli is also considered to be auspicious because of the presence of four elephant heads in all four directions, as elephants are considered to bring good luck, happiness and prosperity. You won’t be able to stop your yourself from praising the rich and elegant engravings on these elephant heads along with the four handles complementing its inclined four legs, fashioned beautifully.

As you shift your vision at the inner edges of the urli, you will be awe-struck by its deep and precise floral patterns, carved in finite layers, extending upto the inner walls. Those who decide according to vastu, then we may tell you that an urli is considered to be an auspicious piece of décor as per vastu, to prettify your room.