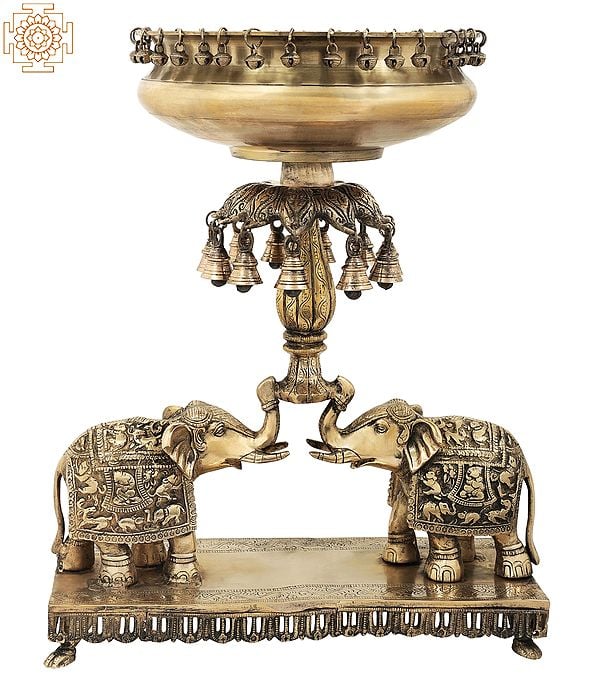 An urli is a decorative bowl that was traditionally used as a cookware in households and to make medicines and related herbs in Ayurveda. It holds a great significance as per vastu as it is believed to bring good vibes, wealth and prosperity to your home and décor. The one shown here is crafted in an enticing manner wherein the large urli bowl has an alluring stand to it, which is carried by the two elephants through their trunk. Both the elephants stand on a rectangular pedestal decorated in a unique styled hanging border and four small legs. Their saddle is carved richly in spectacular Ganesha, elephant and mouse iconographies.

Elephants stand with their high raised trunk symbolizing good luck, wisdom and protection and hold the urli stand, chiselled in an exquisite shape and mesmerized carvings. Its beauty is enhanced by the inverted lotus umbrella that has dangling bells hanging around in a circular motion and scored in circular parallel rings all over the circumference. The urli bowl at the top is kept on a small flat circular platform to support and has a unique broadened matka shape with enormous ghunghroos hanging at the brim, fixed by a ring at equal distances.

This stylized royal urli is entirely different from its cliché, by maintaining the originality with charming twists. Now-a-days brass urlis are the most popular and surable ones and are used as a home décor by filling them with water and allowing flower petals to float in it.