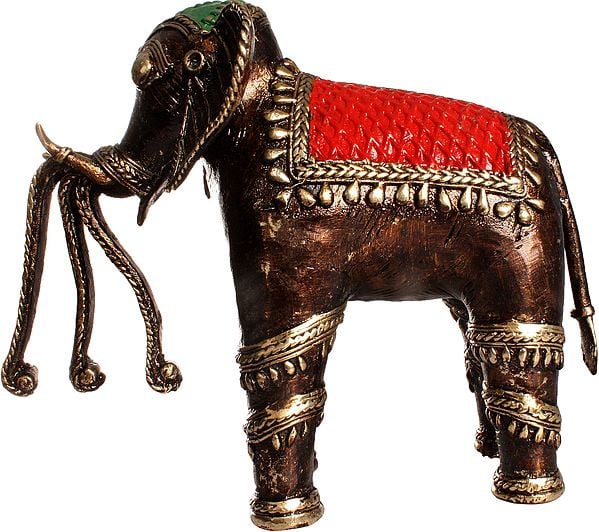 $198
Quantity
Notify me when this item is available

7 inches in height and 11 inches in length this tiny brass elephant widely known as Bastar elephant is from Raigarh in Chhattisgarh. Now a separate state with its sixty-five percent tribal population Chhattisgarh is the home of tribal and ethnic arts – Sarguja for painting, Raigarh for metal casting, Kondagaon for terracottas, Kanker for wood-craft, Bastar for beaten iron craftsmanship, bamboo-craft and many other forms of tribal art … Bastar with almost three-fourth of tribal population represents the ethos of tribal life and culture and is better known beyond the bounds of Chhattisgarh or rather India for the great ethnicity and creative character of the region. Hence, in the world beyond Chhattisgarh the art of this entire region is known as Bastar art, and so this brass-cast.

A characteristic specimen of Bastar brass-art the elephant has been cast using lost wax technique. The technique comprises a series of activities making it time-taking and complex requiring a lot of patience. First the caster is required to make a tinier clay image of the desired object such as this elephant. When dried this base-image is coated all over and evenly with a thick layer of wax making it look like a wax image. This wax image is then covered with compacted or stronger clay. When dried, this clay lump is heated and the entire quantum of wax comes out leaving such spaces or inner recesses empty that the wax occupied. Now what looks like a lump of clay is actually a mould for casting the desired object. However, unlike a permanent mould this mould is only for one time use.

Now with very caution hands the melted metal is poured into this mould in such way that it reaches into the mould’s every part and the desired object is cast in full for a metal object can neither have a patch nor can be subjected to repair, and the entire exercise becomes futile. After the metal poured into the mould has well settled and consolidated the clay mould is removed and out of it emerges the object cast into it. In the process the initial tinier clay image used as the base for giving wax the shape of the desired object gets so much heated that it reduces into burnt dust. This baked dust is scratched out for giving the cast-object hollow shape. For this base image the Bastar artisans use the kind of clay that comprises a greater percentage of sand, obviously, so that it is easily removed, though contrarily till recently the prevalent practice was that they left much of it inside the object itself. Apart, the Bastar artisans preferred thicker layer of wax producing a more sustainable metal cast.

This elephant toy is a characteristic specimen of Bastar art. As is characteristic to Bastar art or rather entire folk and tribal art, the artist does not look for minute details but moves the viewer’s eye to discover the animal in its broad form. His elephant is just a massive bulk raised over four pillars like legs, though he synthesizes into it the worlds of man, animal, myths from divine domain, splendour of kings’ courts besides his affectionate concern for the baby toy – an outstanding example of all assimilating imagination. The golden trident attached onto its forehead transports the animal into the devotional Shaivite world, and the three-trunked form, into the domain of myths. Mythically Indra’s elephant Airtavat is acclaimed to have multi-tusked form. The animal’s rich saddle – a luxurious velvet mattress and gold frills, reveals courtly splendour, and a protective amulet like worn bell around the neck, golden cap on the head and foot-ornament on four legs, the artist’s child-like caring concern for it. The ornamentation appears to be more its inherent part rather than something imposed from outside. Despite all such magnificence, the glamour of court and divine worlds, there reflects in the animal’s eyes concern for all, not any kind of arrogance.