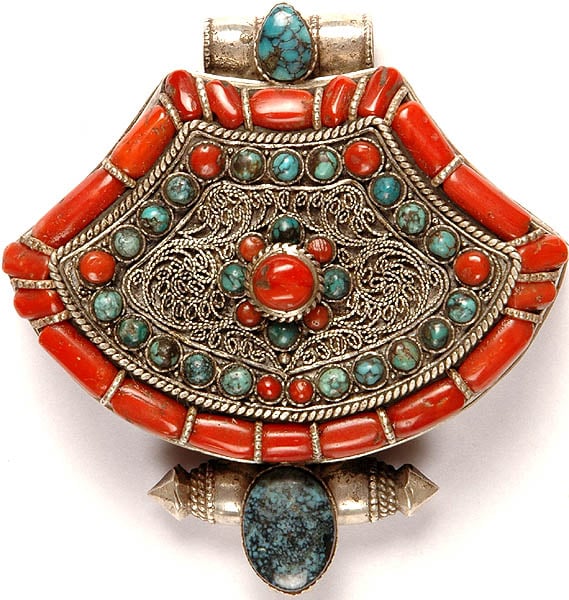 More than 1M+ customers worldwide
Scrolls or scripts containing mantras or excerpts from scriptures were (and still are) considered extremely powerful. Such sacred written treasures naturally required equally beautiful receptacles to hold them. Thus was born the unique box container, the skilled craftsmanship of which was taken to dazzling heights by the Tibetans, where it was called the 'gau'.

The gau is used widely throughout the western and eastern sub-Himalayan area by tribes which follow Buddhism. The origin of this container-pendant can be traced to the often inhospitable environment of Tibet. Violent natural phenomena, such as seasonal floods, hail, winds and sandstorms, affect the success of the crops upon which the people's very existence depends. An ancient, animistic Tibetan iconography shared by most people in this region provides them with a means of coping with such natural disasters. Elemental in this system is the belief that the physical elements in the environment possess power attributed to the presence of natural spirits, some benevolent (trinchhem-po) and others malignant (sem ngem-po). The former must be propitiated, and magical protection secured against the latter. It is either of these two functions, which influences the choice of the gau's contents.

The gau combines in itself form and function. Since it is a container to hold and protect various charms placed within, it consists of two basic parts that fit together, so that access to its inner space is possible. Most generally the gau is made of silver (nga), which is used for the visible front, and the removable back half can be copper, brass, or silver itself.

In addition to being a functional object, the gau is also a decorative one, often of considerable artistic merit - with the flat surface ornamented with wire work, stamped units, and often, turquoise and coral stones. The main space may be filled with filigree (cha-ku le-ka) in scrolling and tendril patterns, that symbolize the ever-flowing essence of nature.