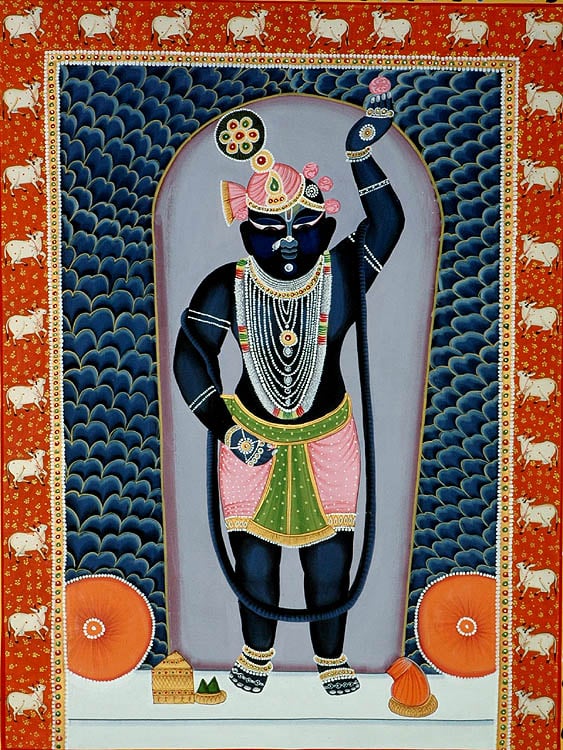 Adorable and sweet black colored Shrinath Ji, who has a dark blue complexion on the face, is standing on a beautiful altar. Shrinath Ji is the childhood form of lord Krishna in which he lifts the huge Govardhan mountain over his left hand as mentioned in Shrimad Bhagawat Purana, to save his dear vrajvasis (the residents of Vraja/Vrindavan) . This incident took place in Dwapar Yug of Sarasvat kalp as per our ancient historical scriptures. The importance of the deity is that it is self manifested, not made by anyone. Like this, there are many other pilgrimages in India. Around 500 years ago Shri vallabhacharya (a God realized saint) who established the path of nourishing (pushtimarg) in vaishnavism made a temple of Shrinathji on the order of Krishna that he received personally. So in his parampara there were many other God realized devotees known as Bhagawat Prapt, which means that they used to talk, play and spend time with their beloved lord by the grace of Guru and sadhana. That’s why Shrinathji is very popular among the vaishnavas and vrajvasis.

Let us have look on the get up of Krishna here; first of all his smooth and loving smile which is pretty attractive and alluring along with a stunning light pink and green dhoti tied on the waist, studded with golden polka dots and pearls attached at bottom. He wears a pink turban over his head having a bunch of peacock feathers in it with an astonishing flower shaped decoration filled with gems. He wears a mogra flower garland which consists of leaves and roses as well with gainda. He wears a heavy amount of pearl necklaces along with a big gold necklace in the centre. There are a variety of ornaments all over his transcendental body in various designs and the lotus feet of Krishna is looking very gorgeous, adorned with marvellous pair of payal and ghungroo. Here, he is not in his usual tribhanga position, instead he stands erect with the left hand up, as if holding the Govardhan. Two orange pillows are placed on both the sides of the deity; with a background of Govardhan shilas, a small plate of pan is placed near his feat along with other two implements. The orange colored rectangular border of cows all around their beloved Krishna adds a spark to the masterpiece.