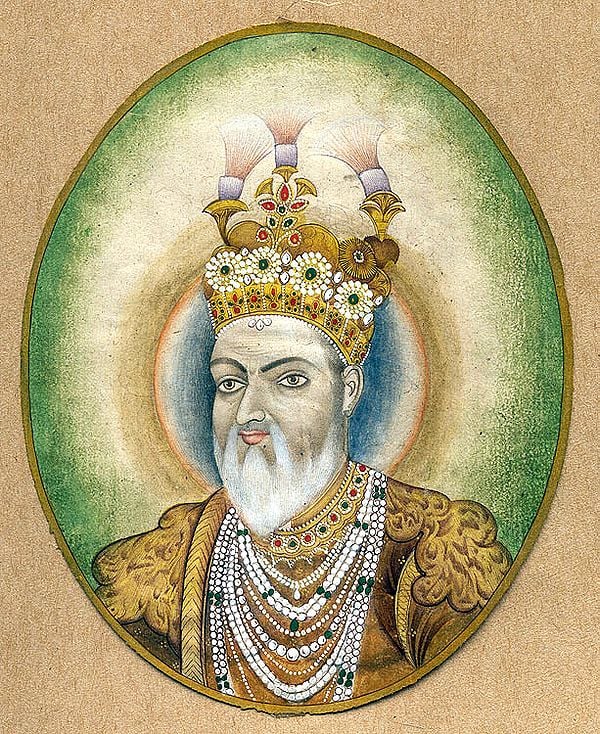 $175
Quantity
Notify me when this item is available
Bahadur Shah II, better known as Bahadur Shah 'Zafar', the nineteenth in the line of Babur and the last to hold on his head the Mughal imperial crown, was a weak ruler but a strong patriot. He was also a great poet and a cultured emotional being. He was put to the Mughal throne as a tutelary ruler in 1837, and was obliged to live on British pension, since the reins of real power lay in the hands of the East India Company. Zafar's wife was often the instrument the British used for realizing their ends on the Indian soil. Bahadur Shah himself passed most of his time in the company of poets and writers reciting to them his poetry and listening to theirs. The two great Urdu poets Mirza Ghalib and Zauk, were to a great extent, products of his court.

Bahadur Shah, during India's first war of independence in 1857 was nominated by the freedom-fighters as their Commander-in-Chief. In the initial stages victory favored the Indians, and for the time being Bahadur Shah had the satisfaction of being the Emperor of Hindustan. But within months the reinforced British army crushed the resistance. Bahadur Shah was overthrown. He was arrested from Humayun's tomb (now in New Delhi), where he was hiding with his three sons and only grandson. He was tried for treachery. His sons and grandson were put to death and he himself was exiled to Rangoon, where he died in jail. Thus with his death was extinguished the Mughal dynastic rule and with that of his only grandson, the family of the Great Mughals.

This oval portrait of Bahadur Shah Zafar portrays his grandeur overbrimming with gloom, an apt definition of his personality. He has been painted with the fabulous Mughal crown on his head and enormous jewels on his person but instead of the Mughal's usual jama, he is seen holding on his shoulders a gown in the English manner. This is not without significance. It is as if he had Hindustan in his head and heart, in his thoughts and emotions, but on his shoulders carried the yoke of British power in India.