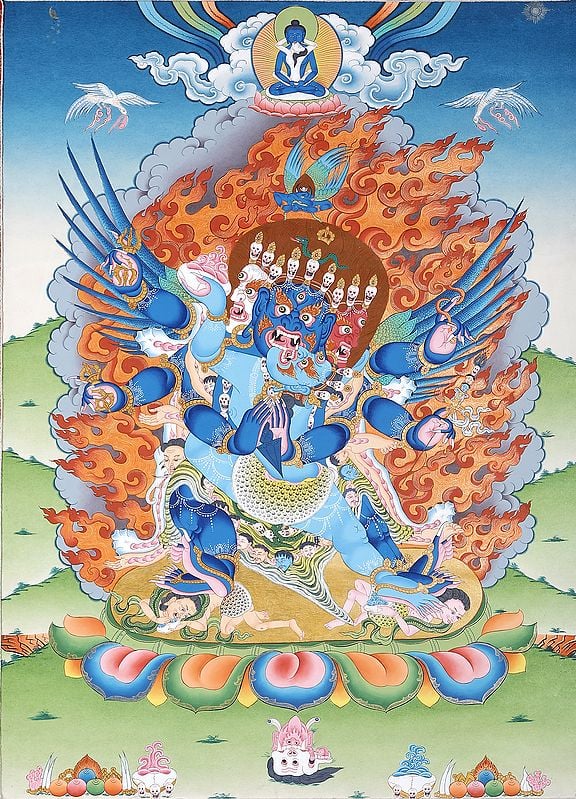 FREE Delivery
Only 1 available
$476.25
$635
(25% off)
Chemchok Heruka is the wrathful form of Samanabhadra, a primordial Buddha. This aspect of the Buddha is a representation of the transmutation of inner channels that are central in Tantric traditions. Chemchok Heruka is a yidam or main deity among the 58 wrathful deities that a man will meet between death and rebirth. This thangka shows a Buddha in the topmost part of his head and aura in an act of union.

He has three heads with three eyes each representing the power of seeing the past, present, and future. The thangka showcases Chemchok Heruka with six hands and wings. One hand holds a vajra (and a five-prong one) which symbolizes the properties of diamond and thunder. He also has a trident with three human heads that denotes moksha from the three worlds. Chemchok Heruka has a crown of skulls and just a little above his head is a figure that symbolizes Amitabha, the Buddha of Infinite Light. Near the center are his two hands holding a kila or a dagger to cut down attachment. He is in an embrace with his consort Namshyalma who holds a vajra in her right hand and a skull cap on the other. He can also be seen stepping on beings but this does not signal him being evil, it is just a show of his power that will stop at no one. Meanwhile, at the lower part of the thangka, there are groups of spheres representing jewels used as offering to the deity. These offerings represent the giving of six senses (sight, smell, hearing, taste, touch, and thought). Its main message suggests the one offering is ready to give the deity their whole being in exchange for blessings. The setting also depicts a mountain range which symbolizes the Himalayas.

The dark, reddish brown winged Chemchok Heruka with three faces, six arms, and four legs embraces his consort in sexual union. He is the terrific form of Samantabhadra, the primordial Buddha form of the Nyingma order. 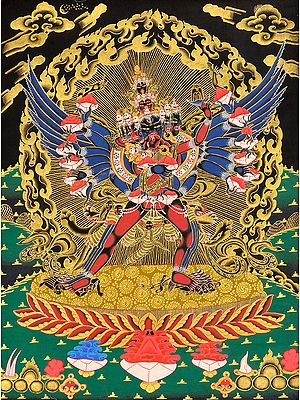