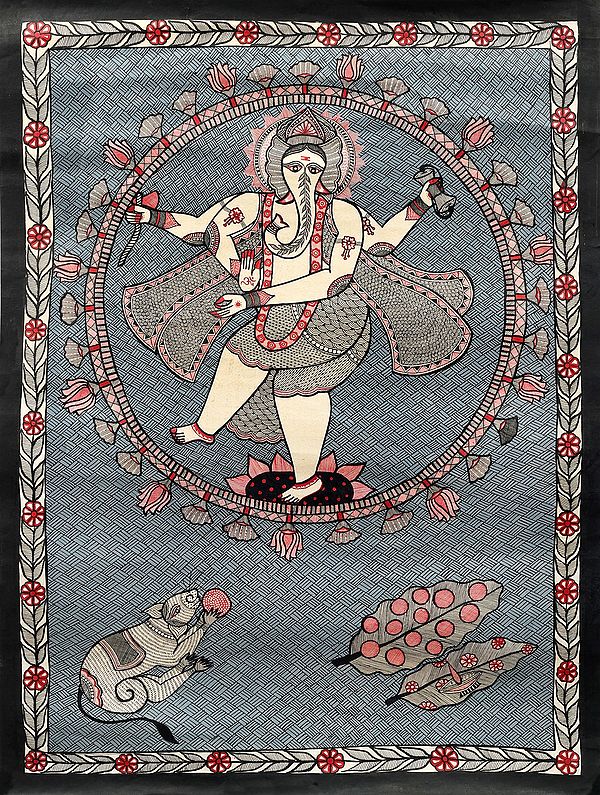 A Ganesha picture in any form is a symbol of auspiciousness and good luck, as it is Lord Ganesha who helps devotees by removing obstacles for a fruitful life and that strength to tackle their problems effectively. Lord Ganesha in this Madhubani painting is graciously poised like the Nataraja, as evident of him being the son of Lord Shiva and Goddess Parvati. Lord Shiva is revered as the cosmic God of Dance, which is inherited in this painting by Lord Ganesha; pictured in white, red and black color tones against a dull grey-blue geometric patterned background.

Madhubani paintings are a popular demand by those who have a good taste of art. Here Ganesha stands on a single foot on a lotus carpet with the other raised high along the hip line. Chaturbhujadhari has his hands tattooed in auspicious symbols and finger tips beautified with alta; rear hands hold the traditional implements symbolic of his patronage and the anterior one are elegantly postured in the iconic Lord Shiva’s Nataraja mudra. The designer garbs are a complement to his white hued plumage and also match with the leaf thread on the trunk. Sun haloed crown and the floral jewels are an add-on beauty to the cosmic aura of Lord Ganesha.

This Nataraja Ganesha dances in a cyclically closed arch of lotus flowers. Lotus is symbolic of purity and enlightenment in Hinduism which is also a major attribute of Lord Ganesha. Ganesha’s auspicious vahana, mouse sits at the bottom left in homage to the Lord, while holding the motichoor laddoo. The opposite corner is occupied by two designer leaf trays with a diya enlightened on it. Madhubani art is majorly festooned with the presence of flowers and leaves which the painter has kept in focus by also framing it with a red and black border.