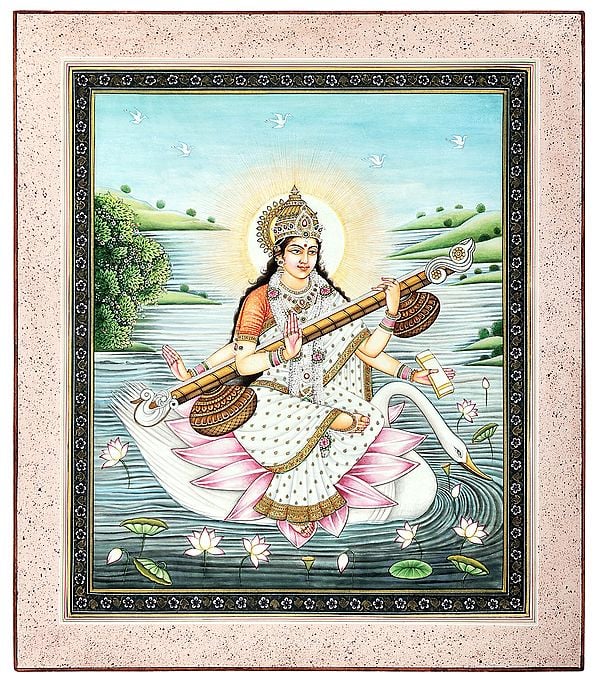 In many respects, Devi Sarasvati has the most distinctive iconography in the Hindu Devi pantheon. The first thing that strikes the onlooker is Her pristine complexion. She is, hands down, the fairest of them all, which is further accentuated by the fact that She is usually clad in silks the colour of snow. The skilfully executed watercolour of Devi Sarasvati that you see on this page depicts Her in a saree with peacock-plumage eyes woven into the fabric.

Skilful, because the serenity of Devi Sarasvati has been captured in this composition. The chaturbhujadharini, the one possessed of (‘dharini’) four (‘chatur’) arms (‘bhuja’), raises two hands in blessing, holds a pothi (manuscript) in another, and cradles the neck of Her veena in the remaining one. Her gracious black tresses cascade all the way down to pale pink lotus on which She is seated. A halo as glamorous as the soorya (sun) itself surrounds Her head, its luminescence dancing off the gold and jewels of Her crown. Garlands of roses and pearls grace the length of Her torso. The composure of the Devi’s countenance fills the heart of the devotee with a sense of trust and calm and safety in the great cosmos.

The long-necked swan, as graceful and serene as its mistress, is the vahana (divine mount) of Sarasvati. It swims about in the cool, grey streams surrounded by verdant, lonely hills.