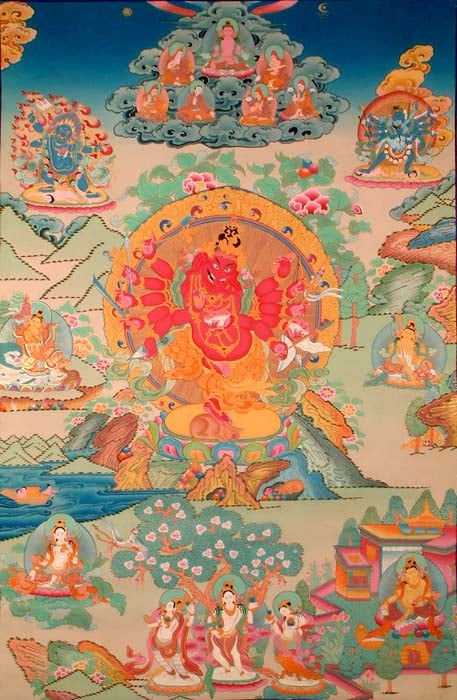 Fair trade
This thangka portrays a powerful wrathful form of twelve-armed red complexioned Vajra ganesha, who is dancing on jewel-spitting rat on yellow disk on lotus throne. The lotus throne is surrounded with rocks, jewels, a jewel-spitting mongoose and flowers.

Here a Buddhist form of the popular Hindu god Ganesha has been depicted. In Brahmanism Ganesha clears away obstacles both spiritual and physical and bestows wealth, prosperity and knowledge. In Hindu rituals and worships, his puja precedes the pujas of all other gods and goddesses, for which he is given the epithet - Agrapujya. Nearly in all Hindu practices his worship occurred at the beginning of any religious ceremony and on special occasions. Ganesha is worships by Buddhists in different forms. However in Tantric Buddhism there is a school that sees Ganesha as a hindrance or vighna. This led to the creation of the Tantric Buddhist divinity Vighnantaka, the "Subduer of Vighna," whereby we see this divinity trample Ganesha underfoot, standing or dancing on him. But on other hand Ganesha is popularly worships as remover of obstacles, and as a protector deity. His cult is very popular in Nepal, Japan, and Tibet and in many countries including India. Thus Ganesha is very popular in Asia. His birthday, 4th day of the month of Bhadrapada of the Hindu Lunar calendar (August-September), is a cause for great celebrations and pujas. His name, Ganesha, "Supreme Master-Lord of the Ganas," or Ganapati, "Lord of the Ganas", describes his overlordships of the ganas. A gana is a spiritual beings, translated here as "Categories" but which also carries the notion of a vast "multitude" or "host" of beings. They are the characteristics, categories, and conditions that create everything in the mundane, material world. And, since there is at least one gana for every such category, they are virtually infinite in number. As master of the ganas, Ganesha controls the characteristics, categories, and conditions of everything. On one hand, he overcome any obstacle, hindrance, or diversion, while on the other hand; he can provide all necessary health, security, and well being to liberate one from mundane cares of the day-to-day existence. In Nepalese Buddhism, Ganesha is always the benefactor and protector. However in Tibetan Buddhism he can be the obstacle as well as the one who overcomes obstacles.

In the present painting wrathful Red Vajra Ganesha dances against a brilliant aureole on the back of his mouse vehicle (musaka vahana) as mouse spews forth jewel like mongoose. In his principal right hand, Ganesha holds a vajra, and in his left, a skull bowl. His remaining right hands hold  a vajra axe, an arrow, a vajra goad, a sword, and a peacock feathered dart. His other left hands hold, noose, a bow, vajra-tipped khatvanga, skull bowl and a bannered lance with shield. He is adorned with exquisitely designed jewelry and rich, complex fabrics connoting the extreme of wealth and luxury.

On the top, Buddha Ratnasambhava is seated in clouds with six Lamas. Below the upper left corner Blue Mahakala as protector of Dharma has been depicted, while below the upper right corner Chakrasamvara Father-Mother have been depicted. In the middle ground, on the right of Vajra Ganesha, Vaishravana, the guardian of North and the Buddhist god of wealth is seated on a throne. On the left of Vajra Ganesha first king of Shambhala, is seated on a throne. There is boat in a blue on which are three personages. On the bottom left, is a goddess with long life vase who is seated on a lotus throne. The paradise of Jambhala is depicted in the bottom right corner, who is seated in the courtyard of his paradise. The bottom centre is finely filled with three wish-fulfilling deities who are standing against a tree and holding long life vases and wish-filling jewels in their hands. The painting is very much suitable for sadhana and rituals of peace, prosperity, long life, and protection from evil. 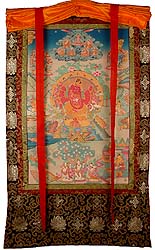 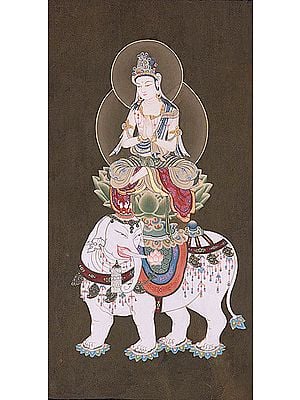 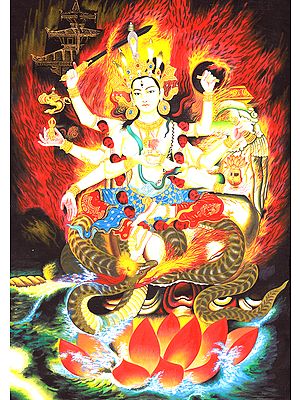 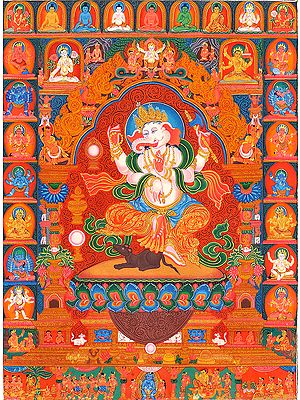 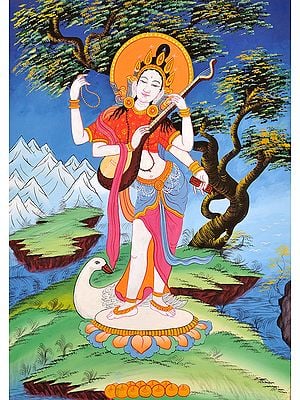 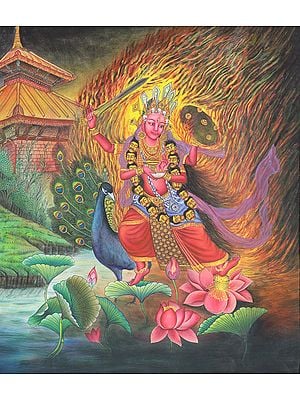 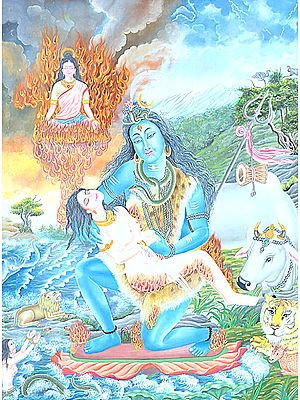