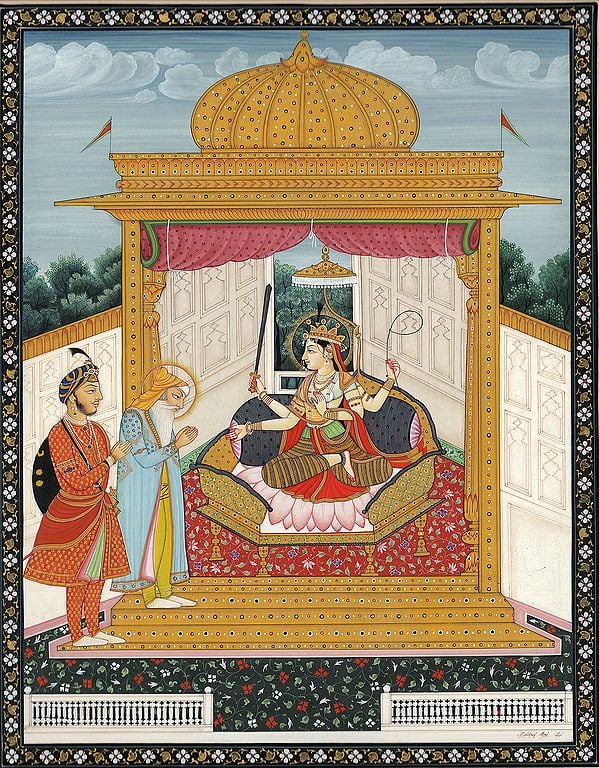 Fair trade
This magnificent miniature, a re-creation of a 1863 masterpiece of Kangra-Pahari mixed style, represents the illustrious Sikh ruler Maharaja Ranjit Singh worshipping Devi. Behind the Maharaja there stands Hira Singh, the son of Dhyan Singh, one of his favoured Sardars. Maharaja Ranjit Singh loved Hira Singh like his son and always kept him with him. Hira Singh was so much privileged that he could even use Maharaja's horse. The humbly attired Maharaja, without crown, 'kalagi' or jewels and also without his shield or sword, in his usual long gown and simple turban, stands before the Adi-Shakti with folded hands. Humbleness defines his demeanour and white beard his age.

The Devi image has been consecrated on a lotus flower laid on a hexagonal golden shrine inlaid with precious stones and gems inside a domed pavilion. The entire pavilion, from dome to steps leading to sanctum, is covered with gold leaves and is inlaid with varied coloured precious stones. The opening of the pavilion is square but its back recedes into a half hexagon. The floor of the pavilion is laid with a rich lavish red carpet embroidered varied coloured floral and creeper motifs. The back and side walls are stuccoed with delicately carved alcoves motifs, typical of Islamic architecture. The shrine supported on elegant gold pillars has the shape of a lotus flower. There rise from its back a curved stand and support on it a gold 'chhatra' inlaid with jewels and adorned with frill of pearls.

The four armed richly bejeweled Devi is seated in semi 'padmashana-mudra' against a huge bolster. In her upper hands she carries a double edged sword and a noose, her lower left hand is raised in 'abhaya' or boon granting 'varada-mudra', while her lower right hand is extended towards the Maharaja in a gesture of accepting his offerings. Halos define both, the image of Devi and the figure of Maharaja Ranjit Singh, but the halo around the Devi image is brighter, larger and far more radiating. Devi image wears a crown with multiple 'kalgis', something typical of Pahari icons of Devi. Davi's facial features, sharp nose, rising neck, pointed chin, small lips and moderate sized but deep thoughtful eyes, are also characteristic features of Pahari iconography. The facial features of Maharaja Ranjit Singh and Hira Singh reveal a marked difference and are more akin to Sikh artists. The artist has displayed great ingenuity in seeking colour balance while rendering Devi's costume. Against a widely expanding deep orange-red 'odhani' he has scattered all her variedly coloured garments, the sash, 'choli', 'salwara' etc. giving them striking projection and balance.

In Sikh history and life, Maharaja Ranjit Singh has passed now into a legend. Leaving aside the ten Gurus, of the born ones, he is the most revered amongst Sikhs. He was not only a great ruler, liberal and largely secular, but also a strong Sikh as well. But in his practices, approach and modalities he was altogether different. Art was his vision, hence he got carved even on sword-handles and other items of daily use the prohibited images of Gurus. He believed this would help propagation of their ideals. Idol worship was prohibited in Sikhism. But, despite, Maharaja Ranjit was a strong devotee of Devi. It hence surprises many how against the Sikh ideal he worshipped Devi's idols. This miniature depicts a shrine more of a domestic sort, as if he had the same in one of his palaces. But this is nothing extraordinary. As a soldier he found in Devi's chivalrous exploits greater inspiration for himself and his soldiers. Besides, his ideal in Sikh-panth was Guru Gobind Singh, together a saint and warrior, who not only worshipped and invoked Devi but also wrote a long poem, Chandi-Charita, in Devi's praise.