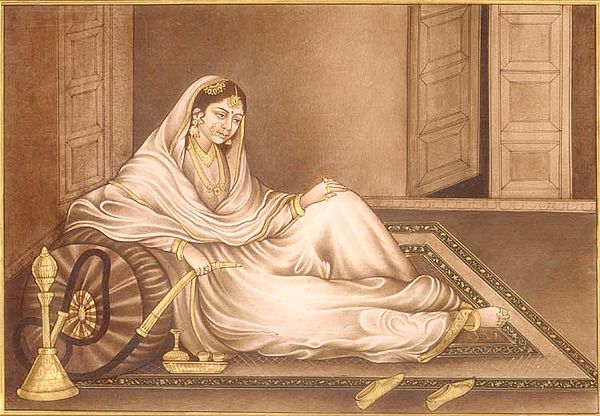 Fair trade
Paintings of extraordinary beauty and variety were made for the many royal court of India during a golden age that unfolded in the sixteenth century and continued into the British period.

What is most remarkable about this portrait is the graceful pose, the subdued colours and pensive face that speaks volumes, and an overall mood of restrained dignity. Resting against a huge bolster, she holds the end of the huqqa, though not smoking it. One of her hands rest on the raised knee. Her face is simple and sensitive; her gaze travelling beyond space, maybe, introspecting. She wears a smile on her face but it fails to reach her eyes which look troubled and pensive. Her jewellery is painted in a manner that shows it's heavy in weight; skilfully crafted head ornaments, down to the tiniest toe rings - all are paid attention to.

The elegance of the portrait is not overshadowed by the background, which shows a door that is ajar. The wall is shaded for better effect. This painting tells that colour is not the most important element of painting.