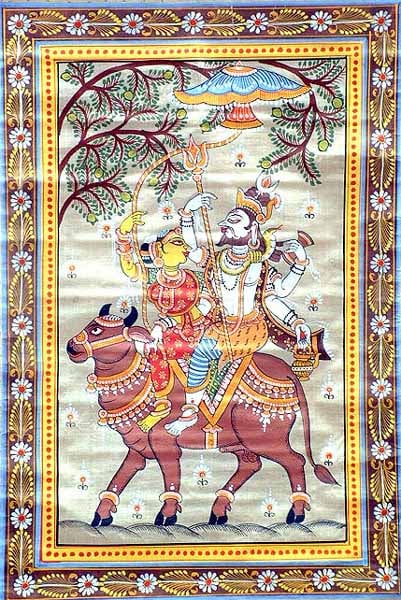 $75
FREE Delivery
This item can be backordered
Time required to recreate this artwork
6 to 8 weeks
Advance to be paid now
$15 (20%)
Balance to be paid once product is ready
$60
Notify me when this item is available
The folk paintings of Orissa have a tradition of great antiquity. The paintings depict major gods in the Hindu pantheon, familiar episodes in the Radha Krishna legend and Sri Jagannath.

Keeping folk-lore as their major inspiration, the artist here describes an episode from Siva Purana. Ascetic Shiva travels the length and breadth of Kailash with his consort Parvati on his vehicle, Nandi, the bull. Unlike its natural counterparts, it is hardly the virile beast that wanders across pastures ready to gore to death a rival with his mighty horns. Shiva's bull is tame and serves as his vehicle (vahana). An analysis of the deities with associated animals suggest a reflection or reinforcement of some of the qualities perceived in the deity. Shiva's bull has strong connections with sexual energies or man's wild, uncontrollable nature.

Shiva sits across the bull holding the trident, the damaru and a kamandalu. With one hand, he holds Parvati securely. He wears a crown and his knotted hair rises above displaying the crescent moon. A snake forms a garland around his neck. Parvati too sits astride the bull, lovingly looking back at her husband and holding an umbrella above his head. Her glance and gesture speak of the love and devotion she has for her ascetic husband.