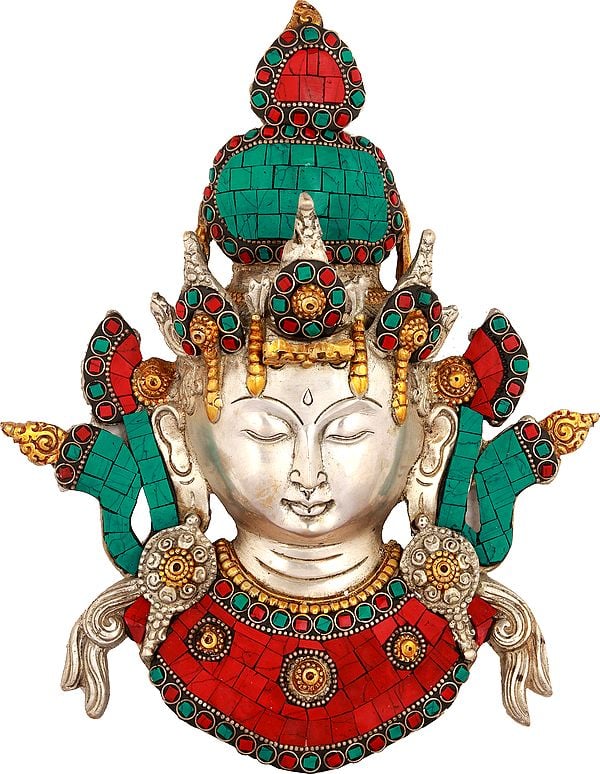 $149
The Goddess Tara is lauded as the ""Mother of Liberation"" and symbolizes virtues of success and accomplishments in work. She is a female Bodhisattva and an important deity in both Hinduism and Buddhism.

The origins of the Goddess Tara can be first traced back to Hinduism before it makes its transition to Buddhism. She is believed to be the most ancient Goddess who is still worshipped today. The name ""Tara"" means star and she was said to be born from water, similar to the Goddess Aphrodite.

She is known to manifest in different forms, such as the Green and White Tara respectively. Green Tara is a representation of protection from fear, while White Tara symbolizes longevity. She is often depicted with a third eye, and either standing beside her consort or seated with legs crossed while holding on to a full-bloomed lotus. This beautiful Goddess Tara mask here is presented to you exclusively by Exotic India Art. It is made of sturdy brass with inlay work on its crown and collar. It measures 10.5 inch in height, 8.2 inch in width, 2.4 inch in depth and weighs 1.4kg.

In modern society, Tara is still worshipped today and is believed to be the most popular deity in Tibet. As the Goddess of Compassion and Saviour of Suffering, she offers a calming presence and serves to remind us to practise kindness and compassion even in a fast-paced world that may be lost in power struggles and constant wealth seeking.