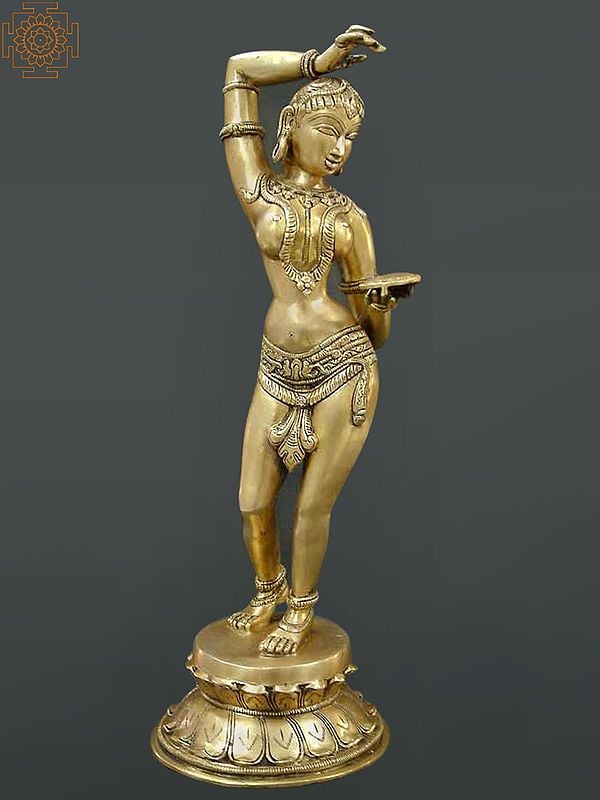 This nineteen inch tall brass cast representing a celestial damsel applying vermilion to her hair-parting excels, in its proportions and finish, the finest of Chola bronzes. The brass, a comparatively tough metal, used in the casting of this statue, has been softened to gold's plasticity and lustre. The minuteness, with which each detail has been carved, renders it difficult for any eye to believe that it is a brass piece. The statue presents a pleasant blend of the skills of a jeweler who endows it with finest details and the vision of an aesthetician that shapes the figure adhering to the highest beauty norms. One gives it its glittering adornment and the other its proportions, unique figure and over-all impact.

The maiden, represented in this statue, has been modeled on the line on which Khajuraho sculptor, working at its Parasanath temple, modeled his Srangar-rata nayika holding a mirror in her left hand and applying vermilion with the other. The Khajuraho maiden is possessed of the celestial charm and the transcendental beauty, as are the mythical denizens of the Indraloka. The represented figure is hence known as apsara, a superhuman maid. This brass statue, due to the greater plasticity of its medium and being a subsequent work, with other models and ideals of beauty in perception, marks a subtle improvement over its stone counterpart. It blends, in its modeling, the grace and plasticity of the worldwide known Gyaraspur Yakshi as well. Khajuraho apsara is broadly a relief, which has limited scope to depict the beauty of figure's back. This statue has greater perspective to feed the viewing eye. In its total impact, the figure of the damsel, represented by this brass piece, is endowed with greater mystic charm, mythical beauty and divine grace, such as are not the attributes of this world.

As a matter of fact, it is the unique treatment of beauty and grace and the great artistic skill that the figures carved in Khajuraho stones, or even here in this metal piece, appear to be the inhabitants of a world beyond the world of man. But, in reality, the artists, working on them, had in their minds only the human figures as well as human aesthetics as perceived by ancient masters. They identified the Indian maid, the nayika, not only in her various characters but also in her various roles and wove around such classifications their aesthetics. Each nayika type had its own demeanour as well as the specific attributes of physique, that is, the body aesthetics and the body language. This statue depicts one of the steps of solah-srangar, that is, the sixteen steps of dressing and adorning a maid. In Indian tradition, it is essential for a married woman to have vermilion mark above her forehead on the hair-parting. She is wearing various ornaments as these aesthetics prescribe for a married damsel. Each ornament, carved of the ordinary brass, is a real jewel by any parameter. In a pleasant gesture, the damsel is holding a mirror in her left hand and is applying vermilion with the right. This gesture curves her figure correspondingly, the left hip protruding and the right recessing. Her lean belly also tilts to right and the fascinatingly moulded breasts make the forward thrust. The face tilted slightly to her left, diagonally angled arms, right leg's backward thrust and the geometry of the entire figure create its own music and produce its own rhythm, which a sensitive ear listens and eye perceives.

Product FAQs
Add a review
Have A Question