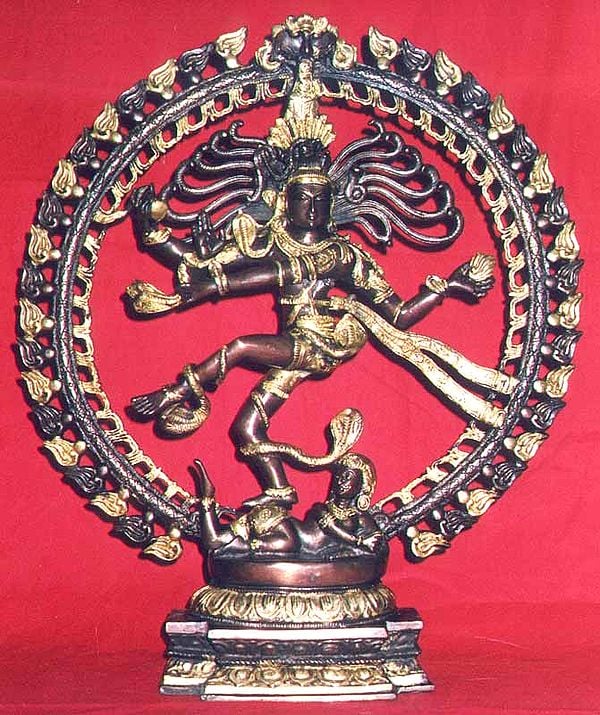 20" Shiva as Nataraja In Brass | Handmade | Made In India

Lord Shiva is a great master of dance. All the 108 modes of dancing known to the canonical texts on dancing are said to have come from him. It is said that he dances every evening in order to relieve the sufferings of creatures and entertain the gods who gather at Mount Kailasha (his abode) in full strength. Hence he is also called 'sabhapati' (the lord of congregation).

The drum, the damaru in his right hand, represents the primordial sound, symbolically speaking. In the Unmai Villakam, verse 36, it is said that: "Creation comes from the drum..." With his right hand raised in Abhaya mudra, Shiva says: 'I protect." The fire which transforms and destroys, emanates from the hand touching the ring of flames. Shiva, all alone, holds the reins of the three cosmic functions: to create, to protect, to dissolve. For the Brahmins, on the other hand, Brahma is in charge of creation, Vishnu protects, and last and very much least, Shiva has the none-too-glorious' power of destruction!

Finally, the hand pointing toward his raised right foot liberates anyone who has penetrated the myth by revealing to him/her the essence of the cosmos. For Tantrists the left foot treading on an evil dwarf symbolizes Shiva's Aryan ex-father-in-law who was responsible for the death of his beloved Sati. "Officially," it represents the demon' Muyalaka. The statue is mounted on a lotus-shaped pedestal.

His hair is peppered with symbols. Jewels adorn his braids and his curled, swirling locks show the impetuousness of his dance which maintains, upholds the universe. Another fantastic intuition: a grain of sand is insignificant and motionless to my eyes. Yet electrons spin around an atom's nucleus at a speed of thousands of miles per second; If all of a sudden all the electrons and all cosmic energy came to a grinding halt, the universe would collapse back into the "dynamic void" (akasha) whence it came!

There is a cobra in his hair but it does him no harm.

The Ganges springs from the top of his head. Add to this the crescent of the moon. He is crowned with a garland of Cassia, a sacred plant. On his right ear he wears a man's earring, on his left ear, a woman's earring, showing that both sexes are united within him. His jewelry highlights his divinity: he wears elaborate necklaces and his belt is studded with precious stones. He wears bracelets on his wrists, ankles and arms, and rings on his fingers and toes! He is clad in tight-fitting, tiger-skin breeches and has a scarf. And to flout the Brahmins, he also sports the sacred thread.

The overall impression is one of easy, light, graceful impetuousness: Shiva-Lila is a "game"! In spite of his frenzied dance, Shiva's face remains serene. In the middle of his forehead, his third eye is open, the eye of intuition which pierces appearances and transcends the sensorial world. For those who can see and perceive it, Shiva's dance reveals, in a strikingly condensed form, the Ultimate. Shiva is thus Nataraja, the Lord of the Dance, the name of Nataraja Guru, precisely.

Shiva as Nataraja : Dance and Destruction In Indian Art (Article)

The Dance of Shiva (Paperback Book)