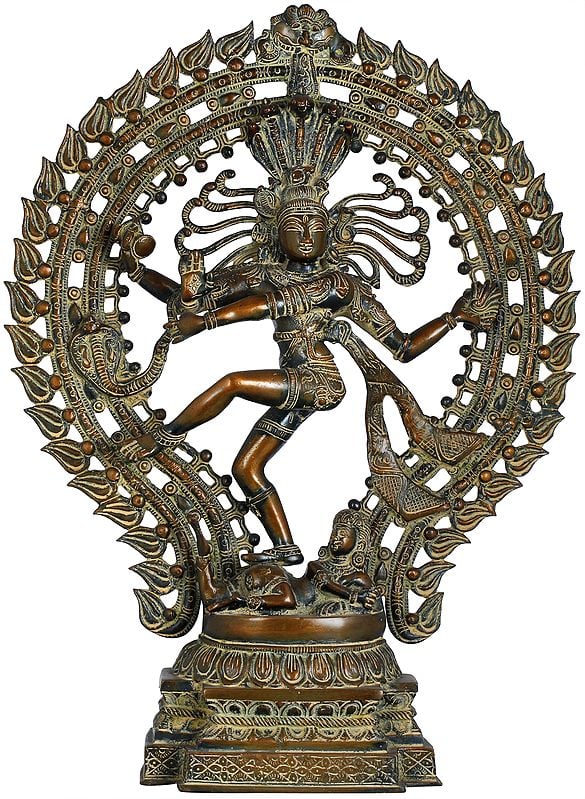 22" Lord Shiva as Nataraja In Brass | Handmade | Made In India

FREE Delivery
$427.50
$570
(25% off)
Nataraja, Lord of the Dance, who sweeps away ignorance and illusion, is the Hindu god Shiva, in his form as the cosmic dancer. He is also known as Bhrahman, the 'supreme universal consciousness' , and as the 'auspicious one'. He is one of the main deities of Hinduism, whom Shaivites worship as the supreme God and is commonly attributed as Benign, Beneficent and the Great Lord and God. Shiva is regarded as the God of Destruction within the Trimurti, the Hindu trinity that includes Brahma and Vishnu. In Shaivism tradition, Shiva is one of the supreme beings who creates, protects and transforms the universe. He is even known as Adiyogi as he is the patron God of yoga, meditation and arts.

The brass has been designed in various exotic colors, stealing the hearts of the onlookers, through the fine artistry that dwells within this amazing figure, as it encapsulates the memorable dance move of the deity, who is festooned with jewels, as serpents dance over his head, in shape of an aureole, adorning his head, like a crown. He blesses the Hindus as he plays a beautiful tone from his drum, while standing on apasmara, representing to defeat the ignorance.

Shiva is the personification of truth, integrity, compassion & forgiveness. The most adorable thing to notice in Lord Shiva's qualities is his simplicity, Compassion, and forgiveness. He is the husband of Parvati and the father of Ganesha, Kartikeya, Ashokasundari and Ayyappa. He is also the great ascetic, who abstained from all forms of indulgence and pleasure, concentrating rather on meditation as a means to find perfect happiness. He has incredible strength and endurence as well as remarkable speed and reflexes in his four arms, with considerable powers to manipulate energy, yet, not as far as Vishnu's extent. Belief in Shiva helps to bring about peace in the life of Hindus who follow the righteous path of their religion.