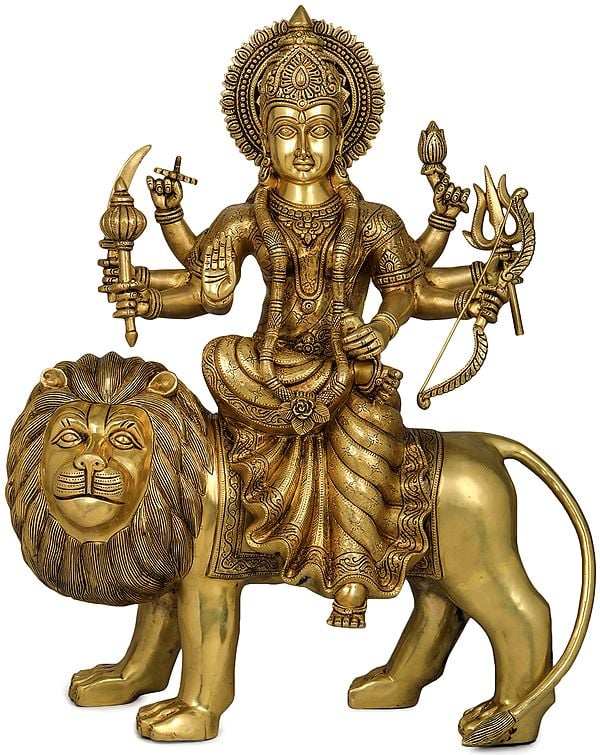 24" Finely Crafted Goddess Durga In Brass | Handmade | Made In India

Goddess Durga is symbolic of the divine shakti or feminine power which is used to destroy the evil forces that are negatively affecting the mankind. It is opined that Durga was created by the combined powers of all gods in the Hindu pantheon to kill the buffalo demon Mahishasura. This finely crafted Durga sculpture depicts the goddess perched in lalitasana on her ferocious vahana, lion. The sculptor has paid due importance while carving out the realistic features of the deity along with the long and thick flower garland festooned on her neck. She adorns a royal silk sari decorated with a thick ethnic carved border and slightly etched flowers on the entire field. The mesmerizing frills of the sari accentuate the beauty of her persona.

Precious jewels of the Goddess complement with the stylistically haloed crown carved in multiple layered carvings a boundary of lotus flowers along with a large leaf patterned broch glorified in the centre. Zoom in to the precisely chiseled extensive layered hairs of lion giving a realistic touch to its iconography and the smooth and shiny lustre of the brass underscores the cosmic beauty of the sculpture. Her right front hand blesses the devotees of fearlessness and protection and the other seven hands carry all her iconic weapons- chakra, sword, mace, conch, bow and arrow, trishul and lotus, with each weapon holding its significant importance.