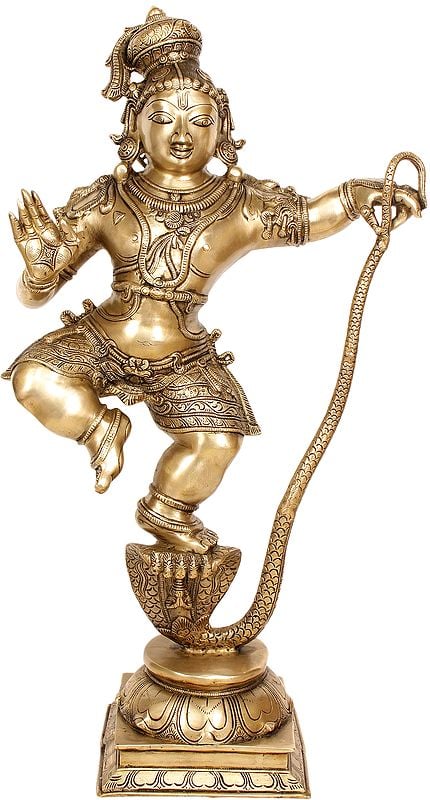 34" The Dance of Victory: Large Size Krishna vanquishes Kaaliya In Brass | Handmade | Made In India

This sculpture illustrates the following episode from Krishna's boyhood.

In the river Yamuna there once lived a venomous serpent named Kaliya. Due to the poisonous vapors emanated by him, the surrounding area was so contaminated that no living being would dare venture near the place. The cattle after drinking the water fell sick, the trees around the pond dried up, and the birds were asphyxiated just by the fumes rising out of the water.

In the chapters 10, 15-17 of the Bhagvata-Purana, there is an account of how Krishna as Kaliya-damana ("he who subdues the cobra") forced the serpent demon into submission:

Krishna, the adventurous seven year old, came to this dangerous place and curiously peered into the depths. He brooded, "I shall vanquish this king of serpents and release the inhabitants of the country from their continual dread.

The boy then girded his loins, made his way up a tree, and jumped with great leap into the depths. Swimming about like a great strong elephant, he made a tumultuous sound which rattled Kaliya. Understanding it to be an attack upon himself, the mighty serpent immediately charged towards Krishna. For over two hours Krishna remained in the grip of the serpent, but then he freed himself and began to expand his body. When the serpent tried to hold on to Krishna, he felt an enormous strain, on account of which his coils slackened, and he had to loosen his hold. Grabbing the opportunity, Krishna pounced upon him as does Garuda swoop upon a snake. He leaped high into the sky and, landing on Kaliya's outspread hoods, began to dance.

By rhythmically stamping his feet on the serpent's heads he trampled Kaliya into submission. The waters of the pool lashed against the shore to provide the music and the waves kept pace with the beat. Finally, under the relentless pounding of Krishna's feet, Kaliya, gravely wounded, accepted defeat.'

The manner in which Krishna subdues Kaliya has a fascinating quality about it. The dance to victory, the effortless rhythm of the Almighty's pace of creation and destruction, the ease, the grace, the sheer play in the manifestations of the Lord's will, all are beautifully brought out in the narrative, which the artist has very skilfully managed to captured here.

In this example, the sculptor has been brilliantly successful in capturing the balancing act of the dance. With his stretched out left arm, Krishna seems to be not just lifting up the tail of the serpent; he is in fact at the same time holding it gracefully. With his right hand in the bestowing protection gesture (abhaya mudra), Krishna conveys his blessings to the subdued Kaliya who has surrendered himself to the Lord.

That Krishna has been depicted here as a child is evident from the close fitting shorts and from the smaller proportions of the body.