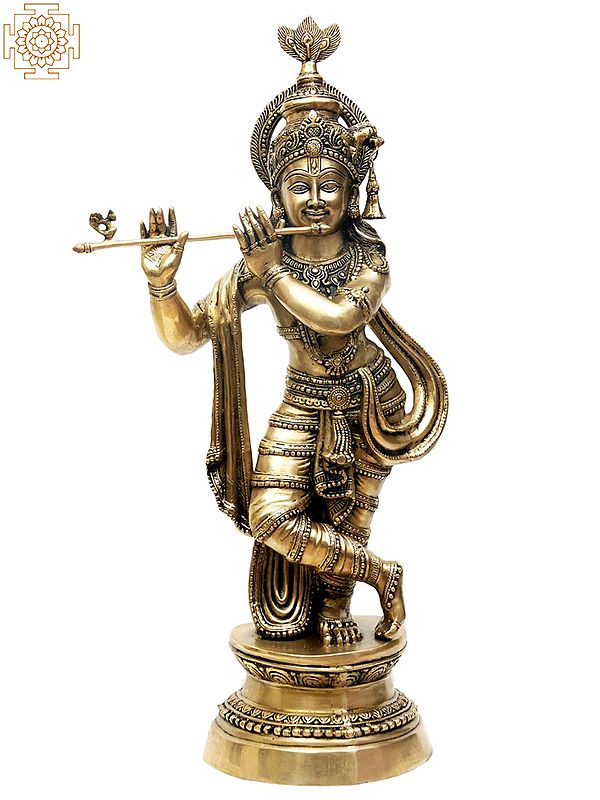 35" Large Size Fluting Krishna In Brass | Handmade | Made In India

This three feet tall gold-like glittering brass statue, a highly accomplished example of the art of metal casting, represents Krishna in flute-playing Tribhanga ? three-curved form. As if overwhelmed by the melody pouring from his flute ? a phenomenon that ears fail to experience but whose sweet fragrance the eyes savour, the entire image appears to burst into a divine rapture. The smile, which his cute lips cradle, reveals the inner bliss, which is, perhaps, the most outstanding feature of the iconography of the image. The divine ecstasy, which emits from the flute of Krishna, has drawn the flute player inside out leaving him transformed into a rhythmic trance, which reveals not only in his 'tribhanga' but also in the gesture of his arms ? a form that combines essence of music, dance and divine grace. The image uses bold details, but given an exceptionally sensitive treatment, which imparts to it its life vigour, even in such bold details, it discovers its great excellence.

The images of Krishna are usually treated with perceptible emotionality, but instead, this image has around it an aura of transcendence. It is unique in its adherence to classical norms, particularly such as in 'Chitra-sutra' the 'Vishnudharmottara Purana' prescribes. As the 'Chitra-sutra' lays it, the image should so well define the deity that, while meditating on it, the devotee is able to re-create it within him, and then severing ties with the material, meditated only on his intrinsic image. 'Swarupa', aesthetic beauty, is the foremost condition of such fully evolved image, as the mind naturally inhales beauty and leaves the ugly out. The 'Chitra-sutra' avers that the image would radiate its ambience ? within and without, with the same 'bhava', emotional bearing, which the image itself has. Hence, an ugly image would emit ugliness, and a 'swarupa', only the beauty, auspiciousness, and good. This image not only defines Krishna's iconic and anatomical form but also reveals such 'bhava', which sublimates the mind and transcends it to spiritual heights. The smile that its lips emit would breed a feeling of happiness within and auspiciousness without.

The image is thus outstanding not only in plasticity, modelling and anatomical balance but also in its artistic merit and worth. It has been installed on an elaborate high 'pitha', pedestal, which adds further magnificence to it. Krishna's mode is 'lasya' ? the dance that defines love, beauty, creation and aesthetic delight. As the incarnation of Vishnu, he is the lord of all three worlds, which are only his magnifications, and the controller of the entire cosmic course, which manifests as creation, sustenance and dissolution. The image reveals this aspect by analogy using a number of symbols. His headdress comprises three components ? a 'prabha' type circle on the back, a crown towards the forehead, and a towering apex which three peacock-feathers surmount. The 'prabha', which the crown representing the Supreme pervades, again consists of three rings, representing three worlds. Three feathers comprise the apex. The crown alone defines oneness; that is, the plurality of cosmic existence is only the magnification of the One who pervades all. This symbolism of number 'three' has been repeated in three curves of the figure, form of girdle, and similar other things.

Sharp nose, emotionally charged eyes, a well-defined chin and neck, and lips with a smile characterise figure's iconography. Neck naturally aligns between the face and the torso. Average height, recessed waist, long and pointed fingers and beautiful dressed hair falling on both shoulders define the anatomy of the figure. His costume comprises a well-plaited 'dhoti' elegantly covering the lower part of the figure, a long sash unfurling on the right side and attached to the girdle on the left, and another sash ? 'pataka', around his waist. The 'dhoti' is so worn that its one end frills in front and the other one on the back where like a huge flower it comes down to the ground. Ornaments are few but beautifully designed used broad patterns and large size gems.