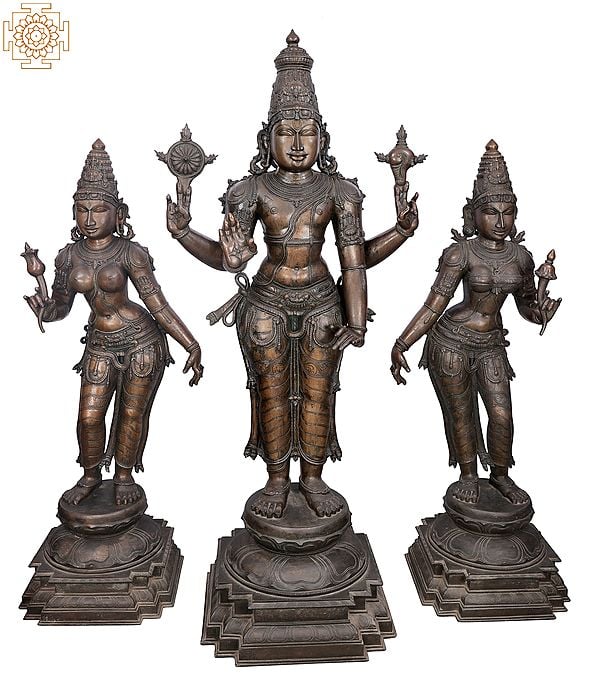 Perumal, also known by the name Thirumal, is a manifestation of Lord Vishnu. A popular Hindu deity of South India, Perumal is famed for his immense power and charming personality. He is often represented as black in color and all the temples have his deity in black. On either side of Perumal are his two consorts, Bhu Devi and Sri Devi, two forms of Goddess Lakshmi. Bhu Devi represents the material world and energy while Sri Devi represents the spiritual world and fertility.

In this exquisitely crafted Panchloha bronze icon, Perumal is shown holding the divine discus of God Vishnu, Sudarshana chakra, and the holy conch, Panchajanya, in his rear hands. His front right hand opens to bestow his blessings to his devotees while the corresponding left rests lightly on his hips in a Kathihasta mudra. Clad in rich ornaments, Perumal charms his devotees with an appropriately divine smile.

Sri Devi is on the right side of Perumal. She holds a night-lotus, her right hand in Kataka mudra while her left is aesthetically poised in Lolhasta mudra, like the tail of a horse. Bhu Devi is shown on Perumal’s left, holding her left hand in Kataka mudra while her right is in Lolhasta mudra. The goddesses are standing upon a beautiful lotus pedestal, bending their bodies in the three places of Tribhanga mudra as Perumal holds himself steadfastly in Samabhanga mudra.

Worshipping Perumal along with Bhu Devi and Sri Devi is believed to bring a perfect balance of material and spiritual world; the key requirement for living a happy and satisfying life.