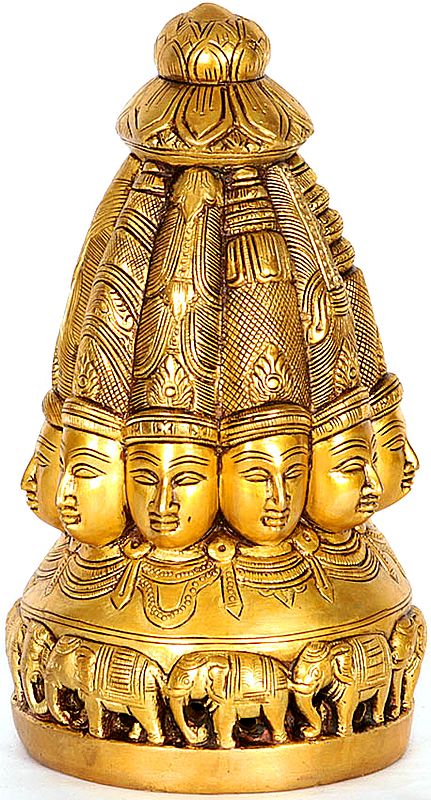 An exotic brass-cast, the artist of this tiny statue has ingeniously created out of a single image a number of forms, mainly the ten-faced Shiva-linga – Shiva perceived as phallus, a temple-‘shikhara’ – tower, as also an accomplished temple with various components. Shiva-linga, one of the two forms, the other being Lord Ganesh, his son, that the artists have most experimented with, has been conceived in this brass image as aggregate of all forms, born or unborn, for they all consist in linga, as also in the temple – the miniaturized vision of cosmos, and also in the temple’s ascendance which its ‘shikhara’ symbolises. The ‘shikhara’ in its ascendance leads the eye to void beyond form where all forms merge and disappear, as also wherefrom all forms emerge. In Shaivite thought, it is in Shiva as linga that all forms dissolve and disappear and it is in him that all forms become manifest. Thus, the diversity of forms which manifests in this brass statue is only the other form of unity which it has as linga.

Broadly, the brass-cast has been modeled as Shiva-linga. In upwards rise it tapers a little more sharply than the form of phallus allows, perhaps in order to accommodate other forms and for enhancing their symbolic thrust. In Shaivite iconography aniconic Shiva-linga is his most prevalent image. Anthropomorphically conceived forms of linga having one, three and five faces are also prevalent in the Shaivite worship tradition; however, a linga with ten faces, as here in this brass-piece, is a rarity in both, the ritual as well as the scriptural traditions. Though created on a common base ringing around the statue’s mid-height, each face seems to have its independent neck and even breast-part; and this magic the artist has manipulated by most cleverly using neck and breast ornaments. He has conceived each neck’s set of ornaments independent of the other with the result that each segment serves as stopper allowing the viewing eye to travel ahead only after it has surveyed also this segment’s other related parts, the neck and breast in particular. Uniformly designed jewellery would have looked merely like a decorative frieze around the statue’s neck.

The statue as much characteristically represents a temple’s form, its ‘shikhara’ alone, as also the entire temple form, both being conceived identically with five parts in temple’s architectural tradition, at least as practised under Nagar temple style. A temple stands on a plinth. It has then a ‘jangha’ – a middle part in ascending order, and then the niches which enshrine deity forms. Beyond this point the temple has the ‘shikhara’, and finally, its apex – ‘amalaka’ and ‘kalasha’. The shikhara’s neck – ‘griva’ is its base. It has then ‘devapatti’, the frieze with deity forms, main or subsidiary. The ‘shikhara’ gains its height in the form of ‘rathas’ – compartments, which might be in any number from one to nine. ‘Rathas’ from all four sides merge into an ‘amalaka’ which a ‘kalasha’ tops.

The statue incorporates both sets of forms. In some of the most artistically conceived and created temples in India, north or south, the temple’s plinth – bhara-patti, weight-affording frieze, has been conceived, as in this statue, as elephants ringing around the whole structure in a row. A series of ten elephants define in this statue both, the temple’s plinth and the shikhara’s neck. Nine of the elephants move in the ring while the tenth stands front-facing, defining the temple’s main entrance. Other components, those of the temple or the shikhara, ‘jangha’, ‘devapatti’, ‘rathas’, ‘amalaka’ and ‘kalasha’ manifest equally well in the statue.