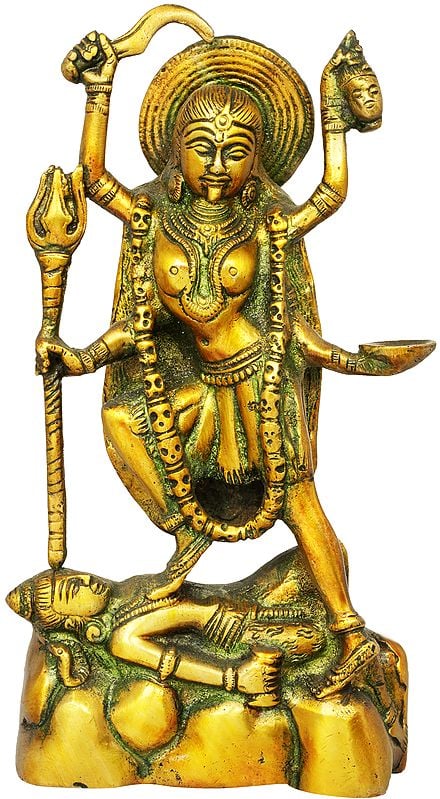 8" Goddess Kali In Brass | Handmade | Made In India

This is a brass statue of Goddess Kali. She is the consort of Lord Shiva and represents the fierce aspect of Goddess Durga. Inspite of being the goddess of death and time, she is also a benevolent mother. Kali also means ‘black’ in honor of being the first creation before light itself. She is popularly portrayed in a challenging posture of standing on a ‘dead’ body who is Shiva himself. Kali is the supreme herself, who is the creation of the best and destruction of evil. She is known by various other names also like, Kalaratri (black night) and Kalika (relating to time).

In this sculpture Kali is standing in her tag posture of Shiva’s dead body lying on a stone base under her feet. Wherein her left leg is on the stone base and right leg is on Shiva’s chest and tongue lolling out. It is said that Kali once started a terrific dance of victory on destroying all demons in a battle. All the deities started trembling and left the way for her. Shiva on request of other gods asked her personally to abstain from it but she was too intoxicated to hear that, hence Shiva lies as corpse and when she mistakenly stepped on Shiva, she immediately realized her mistake and her tongue came out as a mark of shame. She is wearing an apron of human hands which represent her happiness with the offerings of fruitful works and hard work of humans. She has four hands, where left hand is holding a tray to collect the blood coming from destruction of evil and right hand is holding a Trishul which has its base resting on Shiva’s forehead. In the other two hands, one is holding a sword as a symbol of power and the other carrying a severed head showcasing ego. Her long and beautifully patterned, disheveled hairs are illustrating freedom. There is a flower shaped aureole at the back of her head making her look heavenly. She is wearing a multilayered necklace enhancing her beauty.

Her stance is showing her power of destruction of bad and creation of good.