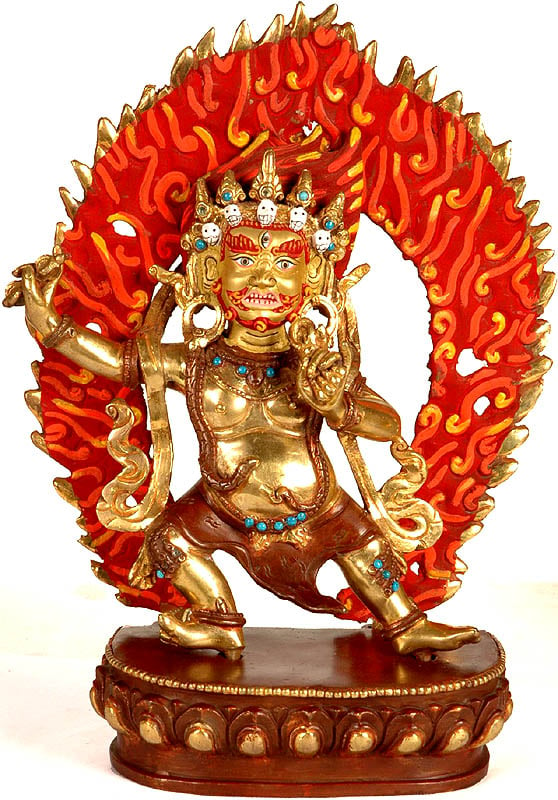 $495
Quantity
Notify me when this item is available

More than 1M+ customers worldwide
Rooted in the early Indian notions of ritual authority, Bodhisattva Vajrapani embodies the great power of a Buddha's enlightened heart-mind (mahabala chitta) to convert others of different persuasions into the Buddhist path. As the embodiment of wisdom of a fully enlightened Buddha, Vajrapani has received a great deal of attention in iconological literature, much of it speculative. Historically, the name Vajrapani, "Vajra-handed", is of great antiquity and is found in the Rig Veda as an epithet of Indra. In the Vedic context, the term is used primarily to connote Indra as a weapon carrier; because it is with his vajra (a lighting bolt) that Indra defeats the demons, and enemies. When and how Vajrapani enters the Buddhist world is obscure, however by the 1st to 2nd century in the Kushana period, representations of Vajrapani are well established elements of Buddhist imagery. In the literature, the term vajra has come to have a nuanced implication of 'adamantine' with connotation such as pure, perfect, and true. Moreover, a yakkha named Vajirapani (skt. Vajrapani) appears in the Pali canonical literature, to pressure defaulting debater to answer the questions of the Buddha. When they have not answered the third repetition of the question, Vajrapani appears "holding a huge iron club (vajira in Pali cannon), flaming, ablaze, and glowing, in the sky just above Ambattha, (who was debating the Buddha), and was thinking  if this young man (Ambattha) does not answer a proper question put to him by the Buddha the third time of asking, I will split his head into seven pieces. Upon seeing Vajrapani, Ambattha became terrified and unnerved, his hairs stood on end, and he sought protection, shelter and safety from the Blessed one. The story is described in the Ambattha Sutta of Pali Sutta Pitaka.

Yaksha Vajrapani became extremely popular in Gandhara school of Art and is found in many narrative sculptures, where he appears as a Herculean warrior with a double-ended club. The cult of Heracles was well-known in Indo-Greek Bactria and Gandhara. At Ahicchattra, near Mathura in central India, Vajrapani was being rendered in stone sculpture belong to the period circa 1st  2nd century A.D., in Partnership with Avalokiteshvara attending a Buddha, as the two embodiments of wisdom and compassion. The Avalokiteshvara-Vajrapani partnership continues to develop in the western caves at Ajanta and Ellora. The modification in these representations is that Vajrapani has changed from his Hellenistic Herculean appearance and is depicted as a princely, Indian figure, with the upper torso bare and wearing the dhoti as lower garment. This change in appearance was probably a cultural reinterpretation rather than a change of status. It is obvious that the primary Bodhisattva pair, Avalokiteshvara embodies the compassion while Vajrapani, the power of the Buddha's mind and wisdom. Later on, in circa 6th century A.D. a distinct form of Vajrapani appears with an acolyte, Vajra Anuchara as seen in Nepal and Western Indian caves. It is said that Vajra Anuchara is a hypostasis of Vajrapani, who himself is the embodiment of the heart-mind (Bodhicitta) of all the Tathagatas. He represents Vajrapani, and acts with the authority of Vajrapani, but is not Vajrapani. According to tradition, Shakyamuni called Vajrapani both as Yaksha and Bodhisattva.

Another form of Vajrapani, emerged between 11th  12th century A.D., is called Krodha (wrathful) Vajrapani and while his symbolism remained the same as other forms, his wrath took on a very literal representation. In this form he has muscular body, tiger-skin skirt, ferocious eyes, and brandishing the vajra as a weapon. His wrathful form was an important part of the Tantric methodologies in the Pala period (c. 750  1199) in the eastern India, and was probably taken to Tibet by Atisha or one of his successors. The wrathful Vajrapani displays his rightful indignation at hindrances that impede the practitioner on the path to enlightenment or is directed toward the stupidity of someone who has encountered the Buddha's teaching and who is, even so, too arrogant and prideful to take refuge in the Buddha, Dharma, and the Sangha. Invoked for both protection and purification, a wrathful Vajrapani is also invoked during the Krodhavesha ritual in the Kalachakra practice. For the yogi, Vajrapani is an archetype deity of fierce determination and symbolizes unrelenting effectiveness in the conquest of negativity.

This fierce manifestation of Vajrapani is a powerful portrayal. His wild hair, brows, mustaches, and beard burn with evil-consuming supernova flames, his eyes laser-red in intensity. He wears five-lobbed jeweled crown with flowers and bone tassels. Moreover, he wears flowing silk scarves tiger-skin skirt, jewel and bone ornaments. Vajrapani is brandishing a vajra in his right hand, the Buddhist symbol of the absolute truth, while his left hand holds a noose, which binds the meditator to the highest wisdom. He dances in alidha posture on a lotus throne and there is a flame aureole behind him.