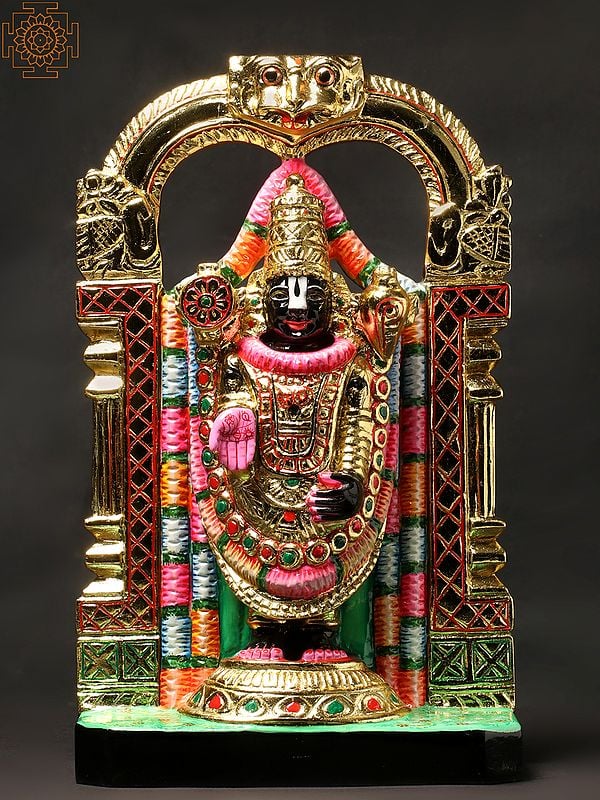 Lord Venkateshwara is the richest deity of Kaliyug, having the most unique, precious and longest crown carved with supreme briefings. This god of Tirumala Tirupati is also called Balaji and is considered as a form of Hindu god Maha Vishnu. The hill on which his temple is situated is called Vengada or Venkata. This sculpture stands erect on an inverted pedestal in a Varada Hasta Mudra- the hand that offers blessings to protect the devotees forever.

He is opined to have four hands; two hands are visible in the front, where left hand is shown with imprints of sacred symbols and the other two invisible hands are empty and curled up at the back in a fist position, but, here he holds his sacred weapons of destruction, as he is the destroyer of sins, as the name says, ‘Vem’ means sins and ‘Kata’ means power of immunity.

Venkateshwara stands in a lavishly framed, fiery eyed keertimukha throne, sculpted with acute patience and fineness and is also outlined with the usual multicolored flower garlands and another on his neck accompanied with a bunch of long necklaces. The structure of his eyes is carved miraculously, filled with lifelike colors and lips painted red. It is said that whenever humanity is in danger, Lord Venkateshwara will rise up from the Tirupati temple and save the world.