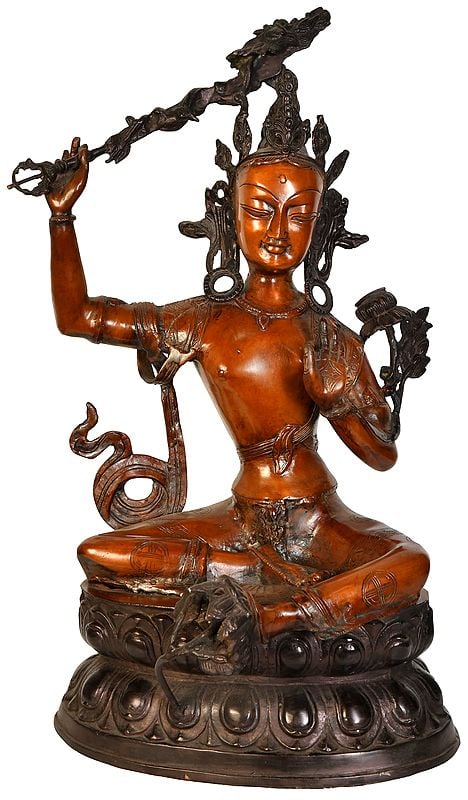 $870
In Sanskrt, the name Manjushri means ‘one whose glory lies in affability’. Indeed, Bodhisattva Manjushri, the student of the great historical teacher Manjughosha, is the very picture of affability. His composure of countenance is tender and all-knowing and forgiving. His body language exudes warmth and compassion, the semblance of a safe space. An emanation of Buddha Vairochana, He is the beloved of His devotees all over ihaloka.

Buddha Vairochana manifests Himself as the Bodhisattva in His enquiry into voidness, free will, and the nature of the self. The sword that He wields is integral to His iconography - it is a weapon as long and slender as He is, engulfed in flames that eat away at the very notion of dvaita (duality). The sword of Manjushri is the sword of viveka (discretion) that cuts through delusion and desire. It makes way for knowledge and equanimity.

In keeping with traditional Buddhist iconography, the Bodhisattva Majushri is seated on a two-tiered lotus pedestal. From the same emerges a smaller lotus, in the chalice of which rests one of His feet. His body is bedecked with sashes and lotuses. A pair of karnakundalas and the gracious five-spired crown frame the handsome features of His face. Note the precision and attention to detail with which the same have been sculpted.