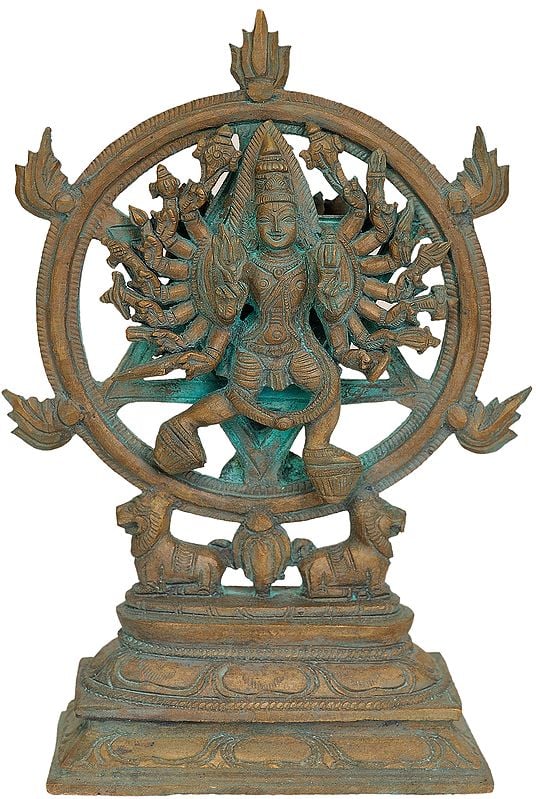 $495
As per the Mahabharata, Lord Shiva, pleased with the devotion of Bhagawan Vishnu, gave him the Sudarshan Chakra, a formidable discus. It is often described as fiery and effulgent compared to the sun.

In this bronze image, Bhagawan Vishnu’s discus is envisioned as a separate deity, an autonomous conduit of the Lord’s power. This form is the subject of special Tantric rituals. Sudarshana Purusha is invariably depicted as a multi-armed figure, standing within an upright flaming wheel, and carrying a number of attributes. The flaming wheel surrounds him like a full-body effulgent halo. He is shown in a striding pose, with the left leg forward (pratyalidha).

Here the Sudarshana Purusha is depicted as a sixteen-armed deity with a flaming crown. He stands in front of a Tantric shata-kona, or star hexagram device made up of two interlaced triangles. The upright equilateral triangle is associated with the male principle and the inverted triangle with the female principle and water. Hence the shata-kona symbolizes the union of the two principles which create and coordinate the universe. His many attributes suggest that he is capable of channeling the full potential of Bhagawan Vishnu’s powers.

As is usual with such images, there is an image of Vishnu’s Narasimha avatara on the back of the disc.

Since they were believed to be effective in battle, images of the sixteen-armed Sudarshana were worshipped in kingdoms under threat by enemies. Many temples in South India have separate shrines dedicated to the Sudarshana Purusha within the temple precincts.