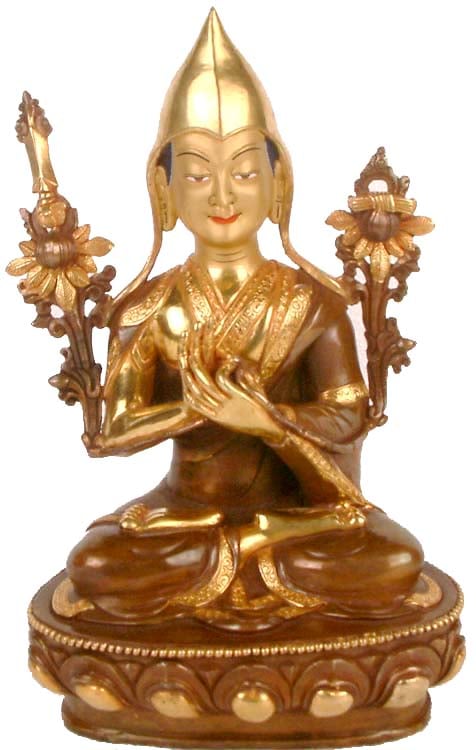 $295
Quantity
Notify me when this item is available

More than 1M+ customers worldwide
Tsong Khapa was one of the greatest lamas of Tibet. He was a renowned clarifier of the doctrine and the founder of Gelug Order. He is known as Jey Rinpoche ("Precious Master") to all Tibetan Buddhists, of whatever sect. He was born in 1357 A.D. in Tsongkha, a region of Amdo, Oriental Province of Tibet, presently integrated in the Chinese province of Qinghai, whence his epithet which has assumed the proportions of a proper name in Mongolia and thence in other many literature. It is said that the house, in which he was born, was overshadowed by a tree each of whose leaves have had an image or the arapachana mantra inscribed. Around it grew the Kumbum Jambaling monastery. His parents were great devout Buddhist. Since his childhood he showed his religious bent of mind and his keen intelligence was evident when he was little. At a young age, he received various degrees from his studies in Central Tibet where he mastered the five main subjects taught by a Tibetan monastic university - abhidharma, madhyamika, Prajnaparamita, pramana, and vinaya. He is believed to have attained perfect enlightenment in 1398 A.D., discovering that he had been all along an incarnation of the Bodhisattva of Wisdom, Manjushri. He then spent the next twenty-one years transforming Tibetan Buddhism and Tibetan society, directing a kind of mass revival or spiritual renaissance into channels of long-term benefit to the Tibetan nation. In essence, he turned a time that was generally believed to mark the final decline of the Buddhist teaching into a time of renewed enthusiasm, widespread insight, and mass rededication to the universal and immediate opportunity to utilize the human life experience as a vehicle for evolutionary fulfillment in enlightenment.

Tsong Khapa had a very sound theological foundation, and was always among the winners in debates, he held a lot of influence. The vinaya received his special attention. He abhorred the erosion and the weakening of morals. He imposed strict monastic discipline, with the interdiction of the use of alcohol, requirement of strict celibacy, and a tight daily schedule. He also attempted to restrict black magic and to resist the erosion of tantric ritual.

Tsong Khapa establishes the Great Prayer (Monlam) Festival at Lhasa in 1409. In 1410, he founded a monastery and named it Garden, "Joyous", after the Tushita Paradise of Maitreya. Here he served as the first Throne-Holder of Ganden (Ganden Tripa). Almost 400 years earlier, Atisa, the founder of the Kadam Order, had also tried to clean house at one time, so the Kadampa was readily absorbed into the new Gelugpa. Under the leadership of Tsong Khapa, the newly founded Gelug Order quickly spreads across Tibet and became the largest school of Tibetan Buddhism.

Due to the practice of celibacy, the possibility of hereditary successions vanished. This made way for a line of reincarnation. Someone who is to be designated as a new monastery abbot or Lama is considered to be an incarnation of his predecessor. Out of this grew the succession of Yellow Hats leadership. As the Lamas of Gelugpa Order wear the conical yellow hat of pandita which became the distinctive headgear of Gelug hierarchs that earned the sect its sobriquet as the "Yellow Hat" sect. The Dalai Lama himself is a member of the Gelugpa Order, although he is not its head. The line of Dalai Lamas began in the 16th century. The Dalai Lamas gradually acquired secular rule over Tibet as well, because the Gelug Order grew to become the most important monastic Order in Tibet. The fifth Dalai Lama, who transferred the administrational seat to Lhasa and who began building the Potala, selected the Lama of the Tashilunpo Monastery as an incarnation of Amitabha and conferred on him the title of Panchen Lama. The Panchen Lamas are the teachers of Dalai Lamas. As the Dalai Lama is considered an incarnation of Avalokiteshvara, whose celestial teacher is Buddha Amitabha, the Panchen Lama, the Dalai Lama's teacher, became known as an incarnation of Amitabha. Up to the present, the Panchen Lamas have served as abbot of Tashi Lhunpo monastery.

Tsong Khapa died in 1491 A.D. at the age of sixty-two. He is now considered a Buddha. Even after his parinirvana, the Gelugpa Order became most powerful sect in Tibet and surrounding countries, and Tsong Khapa's ninety-six disciples established many monasteries throughout Tibet, Mongolia and China.

This finely modeled sculpture depicts Tsong Khapa seated in Vajraparyankasana on a lotus throne. He has very sweet young face. His both the hands are making the gesture of teaching, and holding the stem of the lotus flowers (shown in the holders), between thumb and forefinger. In the holder on his right shoulder are the lotus flower and a sword, and on his left shoulder are a lotus flower and a book. The sword and the book identify Tsong Khapa as a manifestation of Manjushri, the Bodhisattva of wisdom, whose attributes are also the sword and the book. The lotus represents the purity and compassion, and the sword and book represent wisdom. The meaning of Tsong Khapa's hand gesture here is that he is the great guide on the way to liberation. He wears a conical pandita yellow cap that has large flaps and Tibetan lama robe covering both the shoulders, an undershirt under his outer robes. The borders of the garments are decorated with stylized design in gold. His half close meditative eyes depict his spirituality. He is endowed with mahapurushalakshana like, elongated earlobes, broad shoulders, long shoulders etc. The image is very finely modeled and polished; the face, hands caps, sword, pothi, petals and the borders of the robes are gilded with gold.

Nepalese sculptures are well-known throughout the globe for their distinctive features. The artists of Nepal specialize in making small religious figures, especially Buddhist and Hindu, and ritual objects in copper or bronze alloy. The characteristic features of sculptures of Nepal are elongated and languid eyes, exaggerated physical postures, round facial features, and sensuous youthful bodies. All these features exhibit a high level of skill and exquisite beauty that draw their influence from the artistic style of the Gupta and Pala Empires from ancient India. Nepali sculptures are especially appreciated for perfectly portraying the spiritual cultures of Buddhism and Hinduism.

The ancient artists of Nepal preferred to use copper more than any other material due to its amazing properties. It is a soft and malleable metal that makes it suitable for molding into any desired shape or form. A sculpture requires a structure with realistic intricate details and copper is an appropriate material for this purpose. Although copper sculptures do not need much care and maintenance, you should not question the need of cleaning them carefully.

How are Nepalese copper statues made?

Nepalese statues and sculptures are best known for their unique small religious figures and ritual paraphernalia for over two thousand years. These are mainly cast in copper alloy. Nepal draws influences from the artistic styles of Buddhism and Hinduism, and therefore the sculptors of the country specialize in making the icons of both these religions. Over the years, Nepalese sculptures evolved into their own distinctive iconography. Some characteristic features of these sculptures that differ from other pieces are exaggerated physical postures, youthful and sensual features, languid eyes, wider faces having serene expressions, and ornate flourishes. The Buddhist deity icons of Nepal have tremendous demand in countries such as China and Tibet for ritual purposes in their temples and monasteries.

Nepalese statues and sculptures have a high copper content and therefore develop a slightly reddish patina on the surface as they age. However, the most unique feature of Nepalese copper statues is their decorative detailing. The pieces are heavily gilded and sometimes inlaid with semi-precious stones. This embellishment protects them from getting tarnished. The traditional lost-wax method for casting Nepalese copper statues remains the most practiced technique in Nepal for many centuries. This process involves many steps and requires skilled artists.

The first step in lost-wax sculpting is to make a wax replica of the desired Buddhist deity to be cast in copper. This replica is created by hand and therefore needs excellent artistic skills otherwise fine features will be lacking.

Once the wax replica is made, it is then coated with a special mixture of clay with a brush. This layer of clay is hardened when left to dry. A small hole is made on the base of the wax mould so that the wax flows away when it is heated. 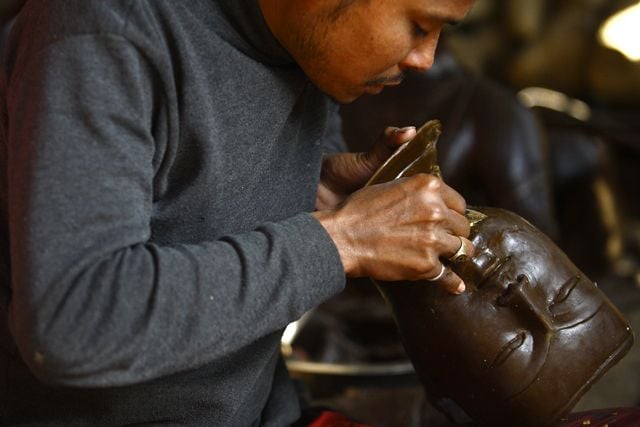 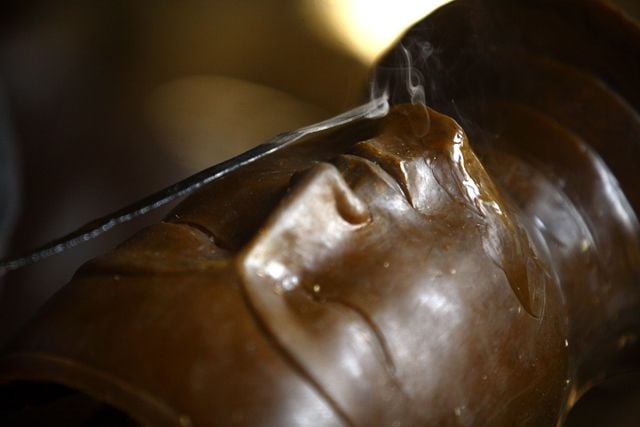 At this stage, a hollow mould in the shape of the deity is obtained.

This is the time to pour liquid copper into the hollow mould which is then allowed to cool and harden inside a container of cold water. When the liquid metal has hardened, the mould is removed and the statue within is revealed. 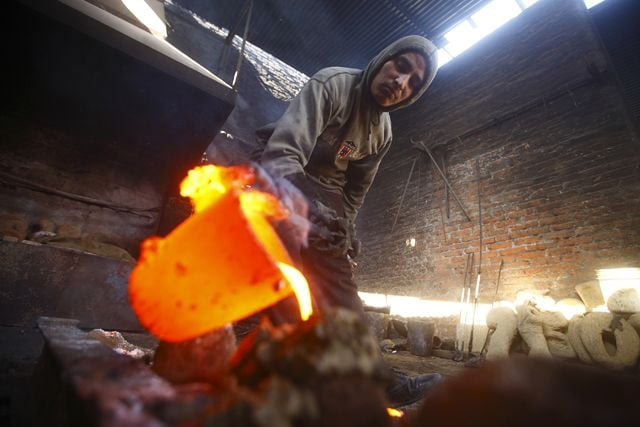 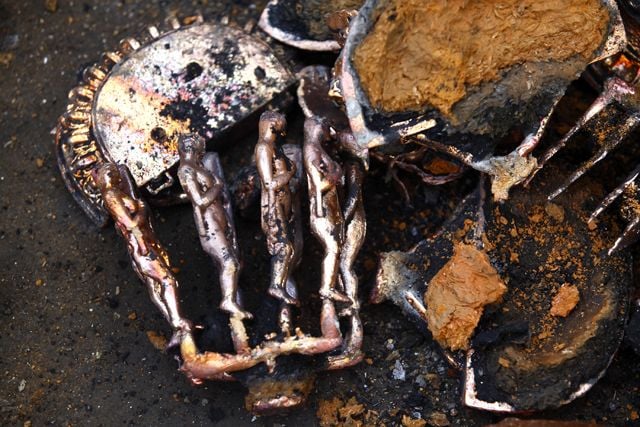 The artist works on the details of the statue using various tools. It is then polished to get a shiny and lustrous surface.

Now comes the most important part of Nepalese art which is gold gilding. This is done by the traditional fire gilding method. A mixture of mercury and 18K gold is applied on the surface of the statue and heat is applied using a flame torch. The result is that mercury evaporates along with impurities, leaving a pure 24K gold finish. 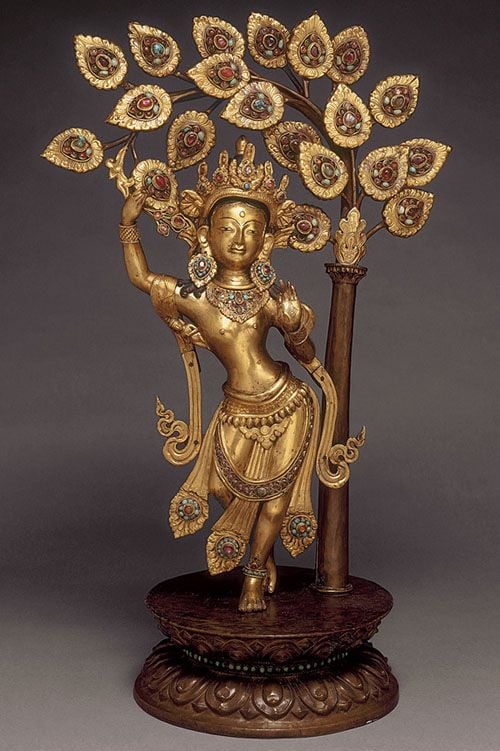 The lost-wax method of sculpting is the most preferred technique for artists to cast a metallic statue having intricate details. Since Nepalese copper sculptures require extraneous effort for giving a majestic look by adding special embellishments, it takes several weeks to complete one masterpiece. A 24K gold gilded copper sculpture retains its brilliant luster for many years and appears as like before. Nepalese sculptures continue to remain one of the finest specimens of the art of the East that have a strong aesthetic appeal that other sculptures cannot match.
Add a review
Have A Question