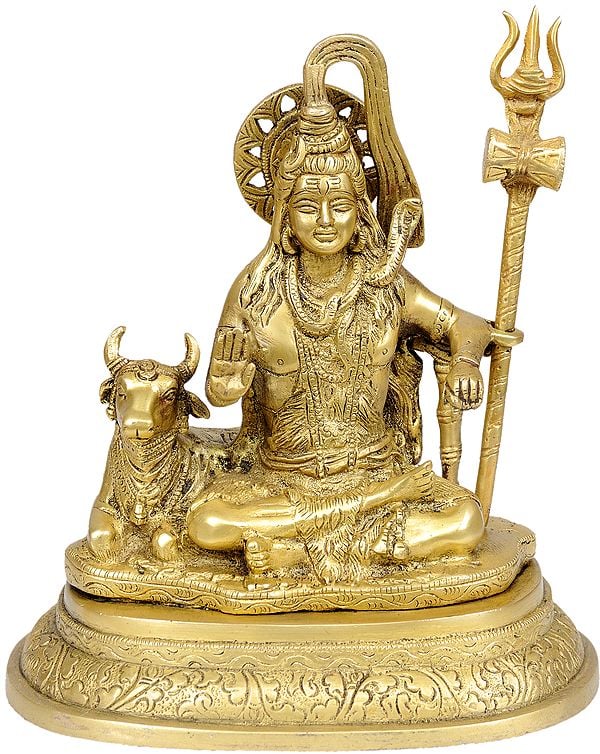 The most accomplished form of Lord Shiva, this brass statue represents him in his Yoga-murti manifestation – Shiva, the first Yoga-Guru : teacher of Yoga, his most fundamental form he is known to have resorted to in every state of mind : deep anguish, self-delight or for the world’s weal. When his first wife Sati immolated her in her father Daksha’s yajna-fire, an aggrieved Shiva retired to forest for ten thousand years and to calm his mind resorted to Yogic meditation. One of the reasons for Daksha Prajapati not agreeing to marry him his daughter was that Shiva was a Yogi, a cult that Vedic line did not approve. One of his earliest iconic images discovered in excavations of Indus sites represents him in Yogi form. Barring his aniconic ‘ling’ manifestation enshrining a larger number of Shaivite shrines his Yogi form is his most popular anthropomorphic image, whether a votive idol for a sanctum or an art piece for a public square or personal chamber.

A benign face with a mild smile on lips, in the statue the benevolent Lord has been represented along most of his traditional attributes, and in his regular image-form. Seated cross-legged – a sitting posture known as ‘padmasana’, a tiger-skin around his waist and a straightened back, the essential body-posture of a Yogi, Lord Shiva has a well-built anatomy with a tall robust figure. His slightly oval face is contained within thick locks of hair on three sides, and a deep and well-defined neck, below – the fourth. Thick locks of hair, as long as trailing down the thigh level, lie scattered covering his entire back and both shoulders. Besides a tiger skin around his waist he seems to be wearing another like a ‘uttariya’ – upper wear, over his breast. A cord with decorative tassels tied around the waist holds the tiger-skin around his waist. He has normal two arms, the left, held over an arm-rest attached to his trident, and the right, held in the gesture of ‘abhay’ – freedom from fear and protection for all. In his left hand he seems to be holding a ‘gomukhi’ – a small cotton bag, containing a rosary that the hand inside it keeps turning unseen. With well-fed cheeks, a bit elongated meditative eyes with heavy eye-lids and wide-stretched eye-brows, broad forehead, elegantly shaped nose and a bit prominent lips define the iconographic features of the image.

The statue has been cast along an irregular base-plaque installed on a multi-tiered oval pedestal. It consists of a broad plain base gradually narrowing in its upwards rise. Elegantly moulded and adorned with floral-creeper drawings the central section of the pedestal substantially narrows down in its rise holding the upper moulding, a plain top, over it. Nandi, the Shiva’s mount, occupies a larger part of the pedestal. Lord Shiva has been represented carrying almost all essential attributes that the iconographic traditions associate with his image : sacred ‘tripunda’ – the ritual mark consisting of three horizontal lines on the forehead, the third eye in its centre, upright ‘jata-juta’ – knotted matted hair with a lace of Rudraksha-beads tied around for containing it in position, trident, ‘damaru’ – double drum, snake, a thick stream representing the river Ganga emerging from his coiffure, crescent on his hair, and his mount Nandi, the bull, seated behind as if supporting his figure. Besides a bell the richly saddled figure of Nandi has been adorned with a wide range of ornaments especially on its neck, forehead and around horns. His usual ear-ornaments – kundalas and wristlets and armlets apart, Lord Shiva is also putting on a number of laces around his neck. A large halo affords to his face the divine aura revealing his divinity. 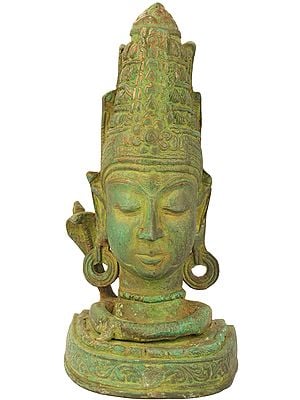 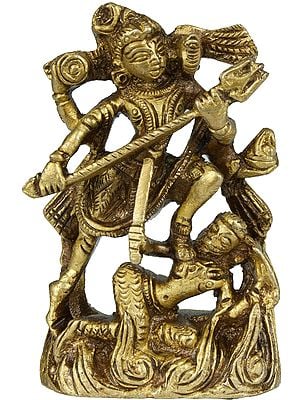 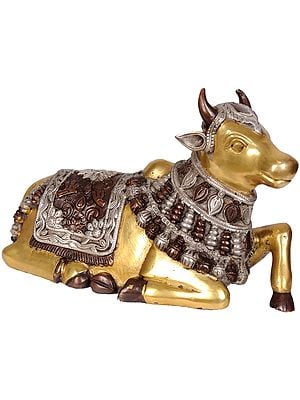 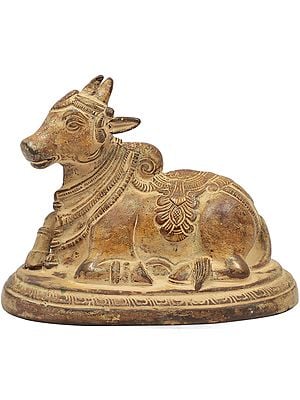 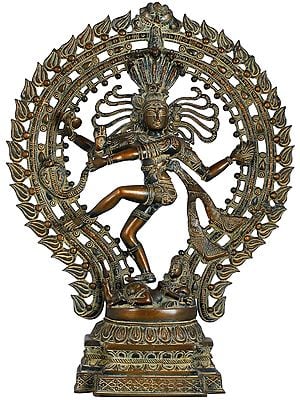 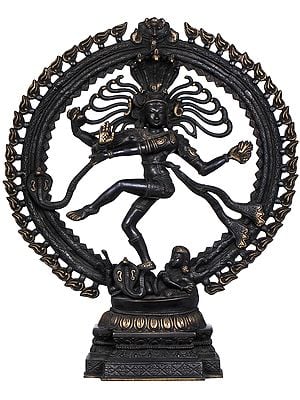 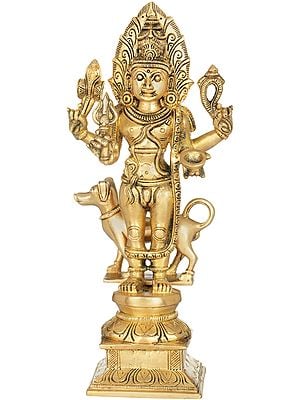 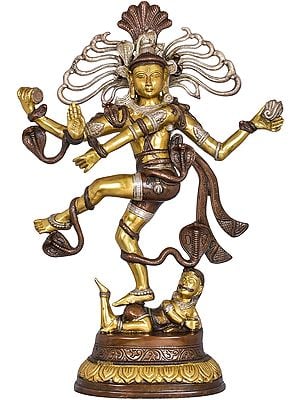 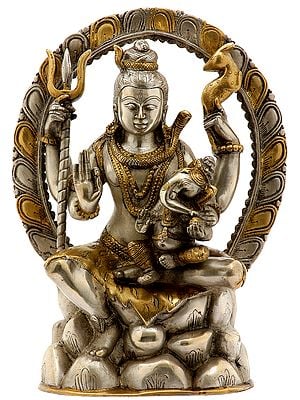 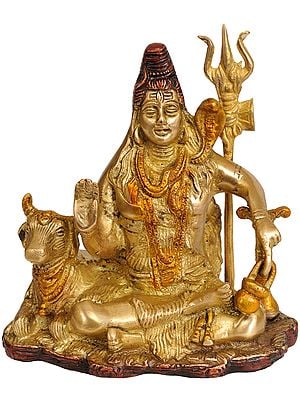 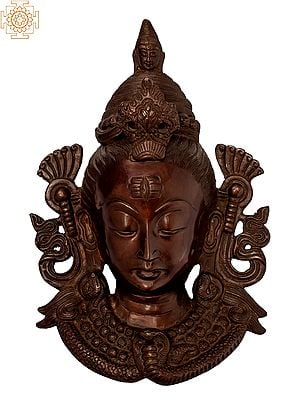 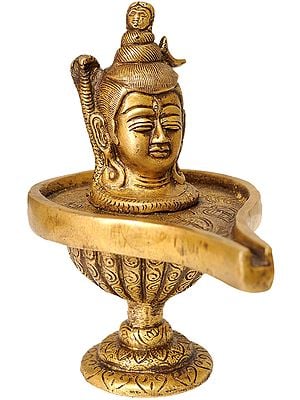 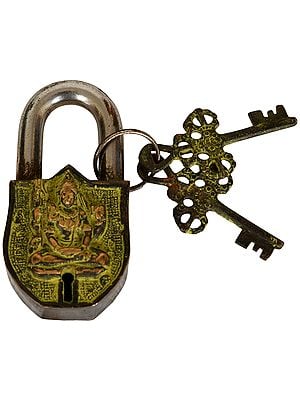 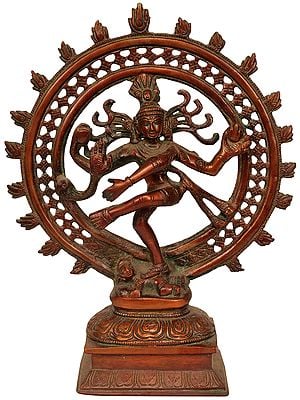