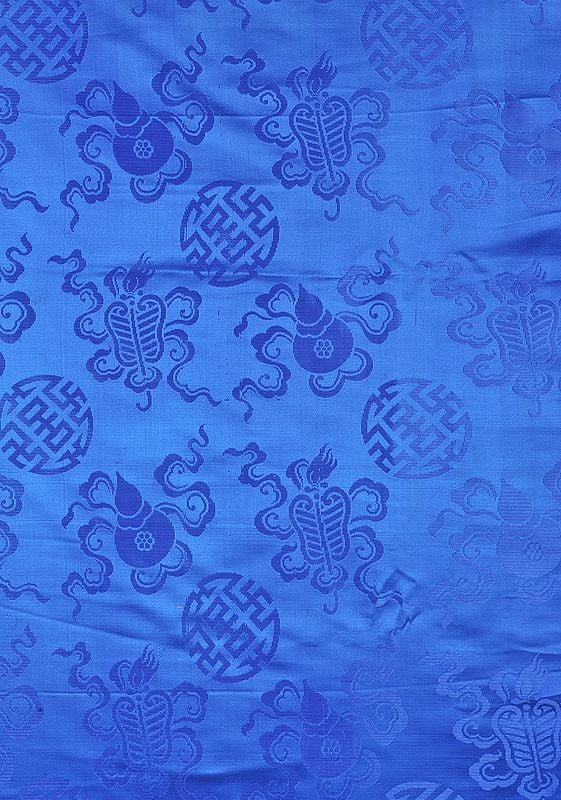 More than 1M+ customers worldwide
From the early days of religion in India, a number of auspicious signs and symbols have come down to us, the origin, age, and development of meaning of which can often scarcely by established. These are usually objects, animals, or plants which, because their value or the manner of their employment, served as ritual objects, symbols of deities, or, generally, as status symbols. As they were always used in established ways, such as for daily worship or the ceremonies on particular occasions, it seemed natural to ascribe a special significance, transcending their individual importance, to this specific combination. Such groups of symbols are found, with many variations, in Hinduism, Buddhism, and Jainism. One such group consists of the Eight Symbols of Good Fortune, also called the Eight Auspicious Symbols. It is one of the most popular symbol groupings among the Tibetans, and also one of the oldest, being mentioned in the canonical tests, which means that is goes back at least to the Sanskrit or Pali texts of Indian Buddhism. The following are the Eight Symbols of Good Fortune:

The significance of a parasol as a symbol is not too mysterious. The ability to protect oneself against inclement weather has always, in all cultures, been status symbols. In fact, even in Europe until a few decades ago, a sunshade was a status symbol for society ladies. A few thousand years ago in a country like India, anyone who owned such a luxury object was certainly one of the well-to-do. And if, in addition, one had servants who carried the parasol, them indeed one's rank and wealth were made very clearly manifest. Thus, the development of the meaning of the parasol as a symbol of power or of royal rank is easy to trace. Also, the fact that it protected the bearer from the heat of the sun was transferred into the religious sphere as a "protection against the heat of the defilements (Tib. nyon-mongs, Skt. klesa)."

The Tibetans took over the parasol from Indian art. High religious dignitaries were entitled to a silk parasol, and secular rules to one embroidered with peacocks' feathers. If some personality in public life, such as the Dalai Lama, was entitled to both, first a peacock feather parasol was carried after him in the procession, and then a silk parasolces.

Within the Eight Symbols, the parasol stands as a sign of spiritual power in a positive sense; the meaning of the symbol is transferred from the worldly to the spiritual level.

This symbol consist of two fishes, which usually appear standing vertically and parallel, or slightly crossed, with heads down and turned towards each other. Originally, in India, the fishes represented the sacred rivers Ganges and Yamuna. As early as the second or third century C.E., they were put on clay vessels. As symbols of good fortune they found their way into the traditions of Jainism and Buddhism. In Tibet, they are found in pictorial representations in connection with the Eight Symbols.

The vase is a fat-bellied vessel with a short, slim neck. The upper opening is formed by a kind of turned-down, fairly broad rim with decorations. The base is a round stand, also decorated. On top, at the opening, there is a large jewel which indicates that it is a treasure vase.

As regards the general meaning of vase and similar vessels, it can be said that their cult employment goes back to the early days of religion. Their symbolic meaning was probably always associated with ideas of storage and the satisfaction of material desires. In the sagas and fairytales of many different cultures, for example, we find the recurring idea of the inexhaustible vessel. At a spiritual level, the vase is often associated with the possession of supernormal abilities. In Tibetan Buddhism, there are various different forms of vases for different purposes, especially for tantric rituals.

The special form of the treasure vase seen among the Eight Symbols is a sign of the fulfillment of spiritual and material wishes, and is also an attribute of particular deities who are connected with wealth, such as Kangwa Sangpo (Gang-ba-bzang-po), one of the companions of Vaishravana.

The lotus does not grow in Tibet, and so Tibetan art has only stylized versions of it. The different can easily been seen by comparing these with Indian or Japanese representations. Also, Tibetan lotuses, as we know them from painted scrolls and statues, show a considerable range of variation. In the Eight Symbols, the basic form is employed - a white flower with slight reddish shedding, with or without a stem.

The lotus is altogether one of the best-known symbols. It is considered to be a symbol of purity, or of pure or divine origination, for, although it has its roots in the mud of ponds and lakes, it raises its flower in immaculate beauty above the surface of the water. It is true that there are other water plants that bloom above the water, but only the lotus, owing to the strength of its stem, regularly rises eight to twelve inches above the surface. Within the group of Eight Symbols also, the lotus stands for purity, especially mental purity.

The conch is white, fairly big, spiral, and oval with pointed ends. The right-turning (clockwise-spiraling) form is considerably rarer than the left turning form, and is therefore considered more valuable. As a natural object, not made with human hands, it is one of the oldest ritual objects. It is often referred to as a seashell and sometimes as a snail shell. The Tibetan term dung covers both.

In Tibetan Buddhism, it is particularly valued for its powerful sound as an instrument. Shells or conches are used both to call together the assembly and during the ritual as a music offering, or as a container for the saffron water. They also serve as ornaments for decorating thrones, reliquaries (chos-rten,, Skt. stupa), statues, and so on.

Among the Eight Symbols, it stands for the fame of the Buddha's teaching, which spreads in all directions like the sound of the conch trumpet. Iy thus has a purely religious significance.

The endless knot is a closed, graphic ornament composed of right-angled, intertwined lines. It is often associated with the Hindu srivatsa sign. In its earliest form, this seems to have been a naga symbol with two stylized snakes. Subsequently, a graphic symbol developed out of it which is described as representing a curl hair, or else a blossom with four or eight petals. For the Tibetans, the endless knot is the classic sign for tendrel, the way in which reality exists. The intertwining of the lines reminds us of how all phenomena are intertwined and dependent on causes and conditions. The whole is comprised of a pattern closed in on itself with no gaps, which at once expresses motion and rest, all in a representational form of great simplicity and fully balanced harmony. It is thus understandable that the endless knot is one of the favorite symbols in Tibetan culture. Used not only in connection with the Eight Symbols, it also appears quite frequently on its own. It reminds the viewer of tendrel, and is at the same time the simplest, clearest, and most concise expression of tendrel. It is therefore conceived as being auspicious in the highest degree. The mode of operation of this symbol is always experienced at many levels. Since all phenomena are interrelated, the placing of the endless knot on a gift or on a greeting card is understood to establish an auspicious connection between the giver and the recipient. At the same time, the recipient is supposed to be linked up with favorable circumstances in the future, being reminded that future positive effects have their roots in the causes of the present, which is what the theory of karma is all about.

Since the knot has no beginning and no end, it also symbolizes the infinite knowledge of the Buddha.

For the Tibetans, the sign of victory symbolizes primarily the victory of the Buddhistaching, the victory of knowledge over ignorance or the victory over all hindrances, the attainment of happiness. At the same time, it incorporates the wish to bring about permanent, enduring happiness  both of the transient, worldly kind and of the ultimate kind  in the sense of tendrel.

This sign is also seen apart from the Eight Symbols, for instance, for adornment of temple roofs. The roofs of private house in which there was a complete set of the canonical texts, the Kangyur (bKa'-'gyur), were also allowed to be so adorned. The victory sign can serve as a hanging ornament in temples, as the finial of both the long prayer-flag masts (dar-chen) and the flagstaffs for the Tibetan national flag, and as an attribute of certain deities, such as Vaisravana, the guardian of wealth.

The wheel, as another graphic symbol among the Eight Symbols, consists of hub, rim, and generally eight spokes, sometimes more. The circle as its underlying form is a universal symbol found in all cultures. In pre-Buddhist India it mainly had two meaning, firstly as a weapon, and secondly as a symbol for the sun, or, derived from this, for time or for any kind of cyclical motion. The number of spokes varied according to tradition  six, eight, twelve, thirty-two, or one thousand. These were often equated with the point of the compass or with a centrifugal motion, while the rim represented the element of limitation. The hub was interpreted as the axis of the world. The wheel was used as an emblem or attribute of Hindu deities.

The most important, and best-known form, and the form that belongs to the Eight Symbols, is the wheel of Dharma which the Buddha set in motion with his first discourse. Accordingly, in Buddhism, there are various explanation of its significance. One of these explanations makes reference to the three trainings of Buddhist practice: the hub stands for the training in moral discipline, through which the mind is supported and stabilized; the spoke stand for the application of wisdom in regard to emptiness, with which ignorance is cut off; the rim denotes the training in concentration, which holds the practice together.

With in the Eight Symbols of Good Fortune, too, the wheel has a purely religious meaning as symbolizing the Buddhist teaching. It reminds us that the Dharma is all-embracing and complete in itself. It has no beginning and no end, and is at once in motion and at rest. Thus, the Buddhists see it as expressing the completeness and perfection of the teaching, and the wish for its further dissemination. 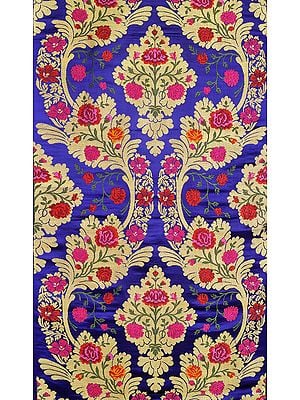 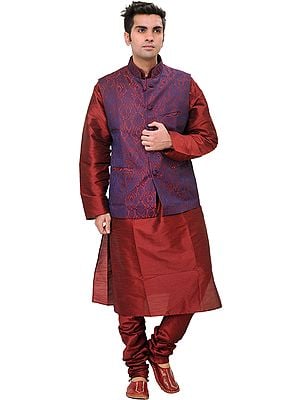 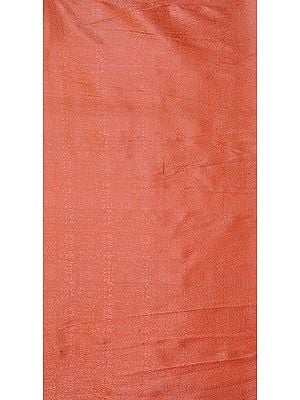 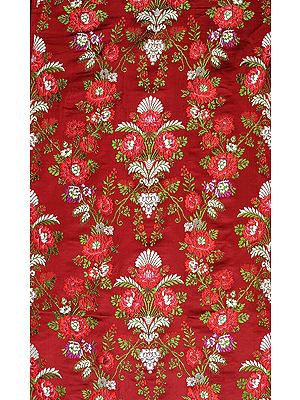 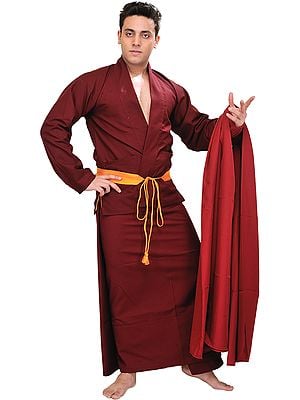 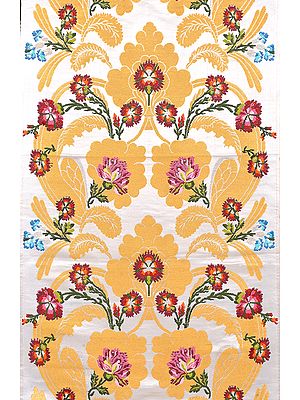 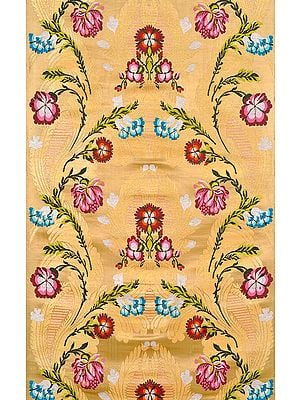 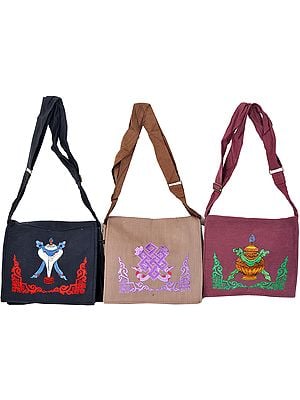 Lot of Three Jhola Bags with Embroidered Tibetan Ashtamangala Motifs
13.0 in. x 12.0 in.
$85
Sold Out 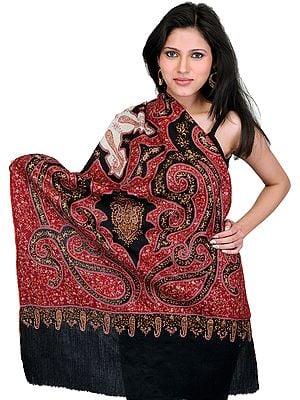 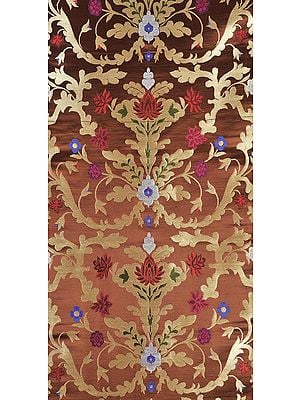 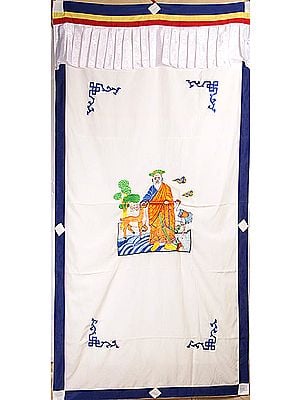 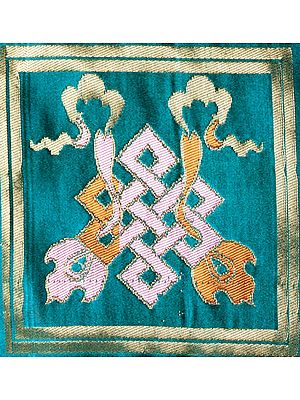 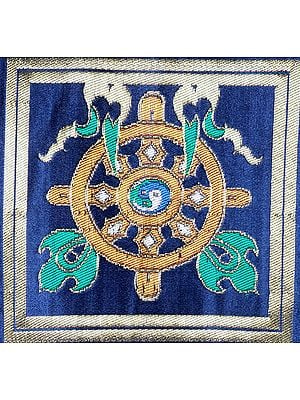 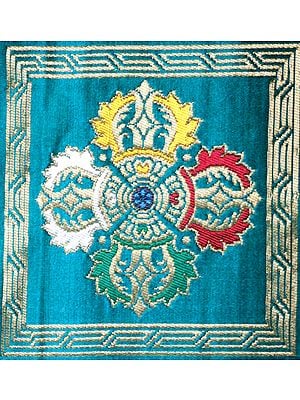 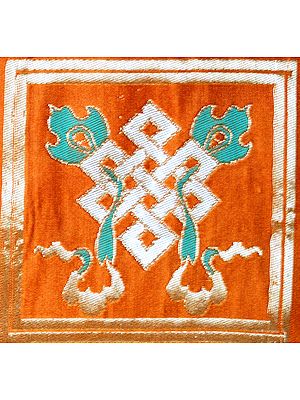 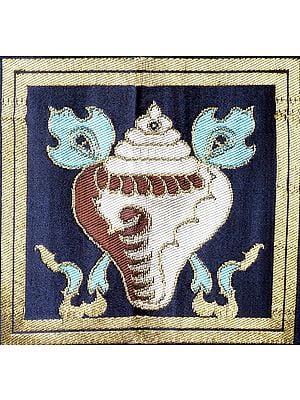