Dr. Sudhaledv Mahapatra was born in a middle class teacher family in Ichhapur, of District Kendrapa (Tulasi Kshetra), Odisha. He did his schollling of Kendrapara up to higher secondary classes. After Completing Bams from KATS Ayurveda Mahavidyalaya, Berhampur University, Ganjam, Odhisha; he completed his MD[Ay], Rasa Shastra and Ph.D. Rasa Shastra from Faculity of Ayurveda, Banaras Hindu University in 2007 and 2010 respectively. Since then he has been engaged in teaching profession of rasa Shastra and Bhaishaiya Kalpana. He is having more than 10 years teaching experiences of both Undergraduates and Post-Graduate students. He has also provided his service as senior on Resident in Faculity of Ayurveda, Banaras Hindu University. During the last 10 years of his teaching 02 books and around 50 National and International Research Publications are in his credit. He is also the expert reviewer of many National and International Journals. Currently he is working as Assistant Professor, Rasa Shastra and Bhaishaiya Kalpana in A&U Tibbia College, Govt of National Capital Territory, Delhi.

World's most ancient techniques and procedure of medical advise along with life style practices are existing in the oldest document of knowledge i.e, Vedas, particulary in Atharv Veda, from which Ayurveda is belived to be developed. Along with the advices for portion [medicine], their brief preparation techniques are also found in different Vedas, in scatter. Gradually, with time, the scattered materials are systematized, augmented with more scientific approach by different scholars and documented in the form of various literatures for the larger benefit of society. It is well known that Ayurveda illustrates, both social and personal well being through health management and living regiman.

Brihatrayee and Laghutrayee are the prime set of literatures, based on which Ayurvedic medicines are being practiced since more than many thousand years. The leading reference literatures of Ayurvedic medicine and surgery, like Charaka Samhita and Sushruta Samhita are describing the diseases and medicines extensively, with little description of medicines manufacturing method. Earlier, subject matter of Bhaishajya Kalpana was dispersed in Samhita Literature, During Samhita period there were no any separate medicine manufacturing branch exists, to provide all details of education, regarding manufacturing and their timely research and development. After this, around 7th Cen.A.D., Rasa Shastra [Indian Alchemy and Pharmaco –therapeutics] came into the scenario with technique of traditional medicine manufacturing, typically with the raw materials of metallic and/ or herbo –mineral origin. Then subject matter of Bhaishajya kalpana described in Samhita texts is merged in Rasa Shastra for academic curriculam and research. In late 20th Cen. A.D, the Bhaishajya kalpana as a separate chapter of Ayurvedic Education came into scenario with entire portfolio of drug and drug delivery system, leaving Rasa Shastra as another chapter for specifically dealing with metal and mineral medicines, at under graduate level. For detail studies in Bhaishajya kalpana and forwarding it's research acvities, post graduate and research degree in different aspects of Bhaishajya Kalpana are being encouraged now a days.

So many literatures specifically related to the subject are available, Starting from Sharangadhara Samhita to API and AFI, different aspects of the subject are found described with new philosophy, new techniques and research findings addes day by day. However concise Bhaishajya kalpana as a study material for student with all updated thought and concept are rarely available.

For the success of Ayurvedic treatment three cardinal formulae are essential to follow and implement in health infrastructure. Among these, Aushadha is very vital one and is the key of all. In a broad sense Bhaishajya kalpana deals with drug identification, collection, manufacturing, quality control, administration, development & designing. Rules and regulations there on along with therapeutic indications, with respect to Ayurveda Education and Research.

Standard way of manufacturing is the key that converts the inert and toxic materials into medicine. Hence the subject Bhaishajya kalpana is having key role to develop and propagate Ayurveda as whole.

Hence there is always need of good literatures/texts containing all the related materials of Bhaishajya kalpana,presented in a systematic and convenient way. The current book on Bhaishajya Kalpana entitled "Advance Studies on Bhaishajya Kalpana" contains 26 Chapters and 02 Appendices. The subjects discussed in different chapters are not only presented as per the curriculam of CCIM but also supplemented with critical analysis of of different aspects of the subject and contemporary thought regarding the same. Starting from chronological history of Bhaishajya kalpana, fundamental principles, different dosage forms with pharmaceutical techniques and quality control parameters along with research fundamental described in appendex are presented in this book, in a very systematic manner with tables, flow charts and figures at different places. The style of presentation of the subject for learning process. Both ancient and contemporary thought regarding the subject is reflected in the book. I hope the book will have immense help to both UG and PG students of BAMS as well as B.Pharma [Ay] and M. Pharma [Ay]. I bless Dr. Sudhalev Mohapatra for this kind of academic work and wishing all success in future.

Now days, Ayurveda is attracting the people all over the world, due to it's safe and natural dosage from along with schooling of superior disease free life style regimen. In health care infrastructure Ayurvedic medicines are contributing a large, throughout the globe with it's systematically designed pharacceutical dosage from and traditionally prepared potion, Subject Bhaishajya kalpana [Ayurvedic Pharmaco –therapeutics], branch of Ayurveda, describe details of pharmaceutical preparation of different dosage form and suggests their therapeutic indications.

Current time is the transitional phase in Ayurvedic healing method where there is requirement of evidence based medical system. It makes the time-tested Ayuveda health care, transit from traditional way of folk base use into analytical and clinical data base use. Bhaishajya kalpana is the core of Ayurvedic healing infrastructure, where different elements and subsets of drug and drug delivery system, are defined developed and implemented.

One of the thrust areas of Ayurvedic is manufacturing of noble and standard medicines, which can be fulfilled by the development of Bhaishajya Kalpana at each level of the subject i.e. selection of standard raw materials, suitable equipments, convenient manufacturing process standardization of finished product etc.

The subject matters of Bhaishajya kalpana can be comfortably stretched from the first documented educative literature of the world i.e. Vedas to different parts of API and AFI published by Govt. of India since late 20th Cen. A.D.

Central motto of teaching and training of Bhaishajya Kalpana is to produce skilled and quality Ayurvedic physican/personal who will well aware about the philosophy, concept and practical aspects of different noble dosage form of Ayurveda, their manufacturing, standardization, related laws and different particularly researches occurring in the area of entire portfolio of drug and drug delivery system.

With the motto to present the entire subject of Bhaishajya Kalpana in a very concise and Systematic manner this book is designed. The book contains total 26 Chapter and 02 Appendices. Chapter are tried to arrange in a very logical way from chronological history Bhaishajya Kalpana to contemporary research methodology in the field of medical science and drug supplement with critical analysis of different aspects of the subject and contemporary thought regarding the same. The subject matters described in different chapter are augmented with tables, flow charts and figures as where require for easy understanding and convenient learning of the students. Chapters meant for brief discussions regarding the Rules and relgualtion, equipments and their working principles, drugs standardization and analystical parameters, research methodology and new drug compiled and incorporated with the aim to make aware about the fundamentals of these things [however for details respective literatures should be followed] with the aim to make aware about the fundamentals of these things to under graduates students and specially to the post graduate students of the subjects along with the students of B. Pharma[Ay] and M. Pharma [Ay].

Chapters containing different dosage form and their manufacture are supplemented with current thought regarding the dosage form and the scientific critical analystic of pharmaceutical process with frequently used formulation in clinical practice.

In Appendix –I different aspects of drug research from clinics to Laboratory along with brief introduction of animal experiments are discussed which is incorporated specially for post graduate student. In Appendix-II, frequently used poisneous herbal drug are described briefly with their pharmaceutical and clinical aspects.

The material collected and incorporated in this book as where necessary, for the education purpose from different ancient literatures, contemporary literatures, electronic multi –media and Govt. publications are duly acknowledged. The materials collected from different sources like different Sanskrit verses, laws, rules and regulations, analytical procedures are tried to present in easy language and sentences for the convenience of understanding of students and necessary modification are made keeping the sense intact.

Lastly it gives me immense pleasure to dedicate this book to the Indian Armed Force those are performing their duties with highest sincerity and discipline with endless patience without being worried about their personal life, at the border, day and night for the sound sleep of countrymen Also whole of Author's royality is dedicated to the well fare fund of the brave solidiers of our country.

All success of this book is due to the great mercy of supreme soul, blessings of my parents and all teachers along with wish of friends and students and each mistake is reserved for me. 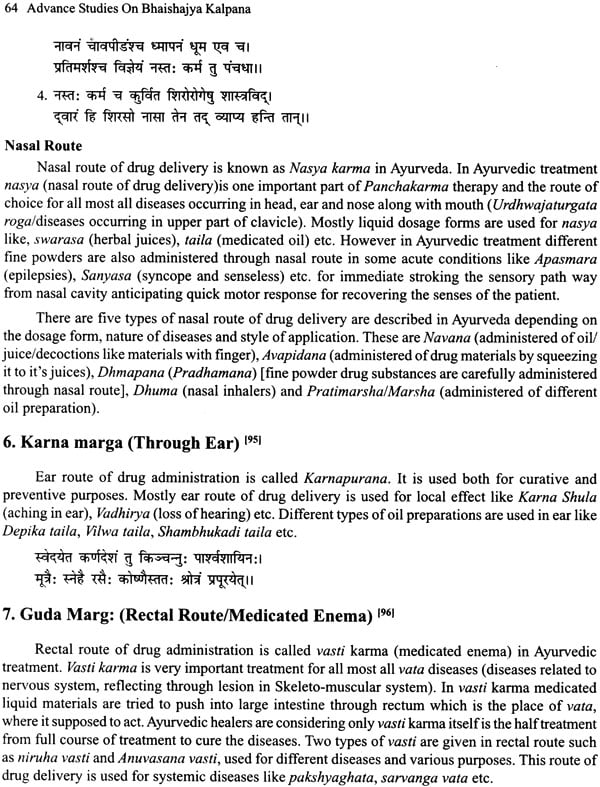 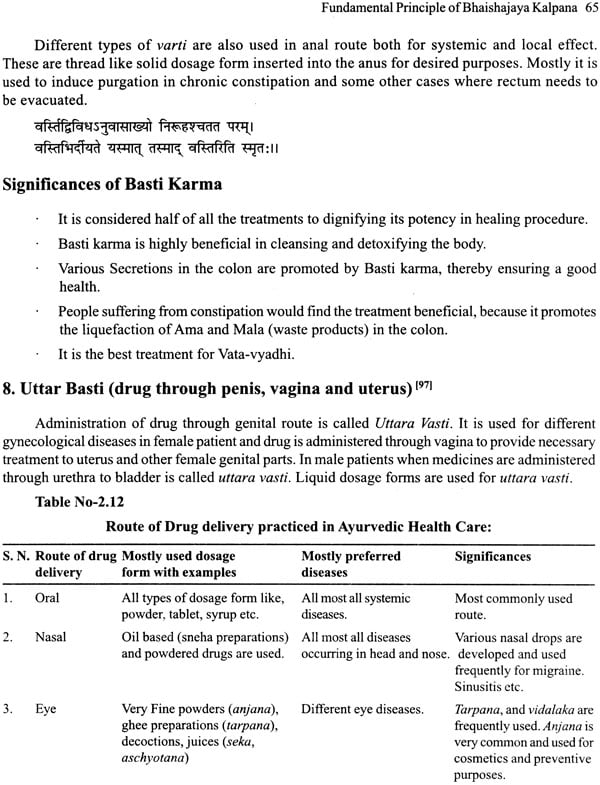 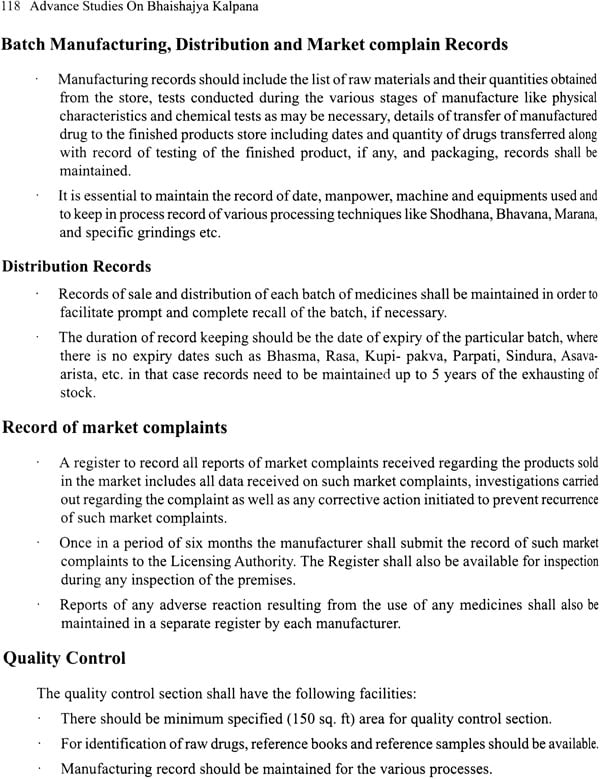 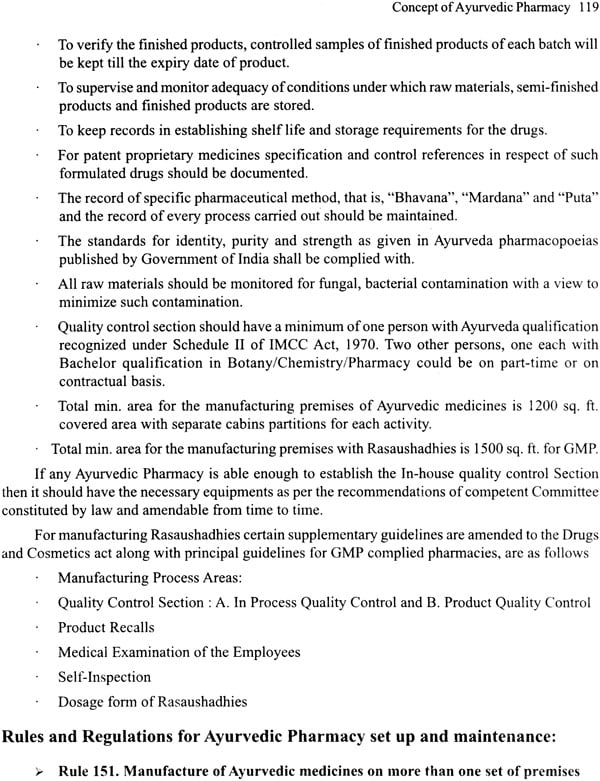 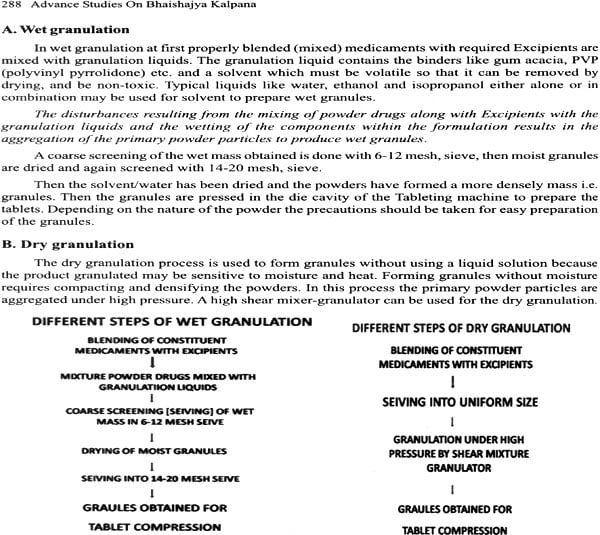 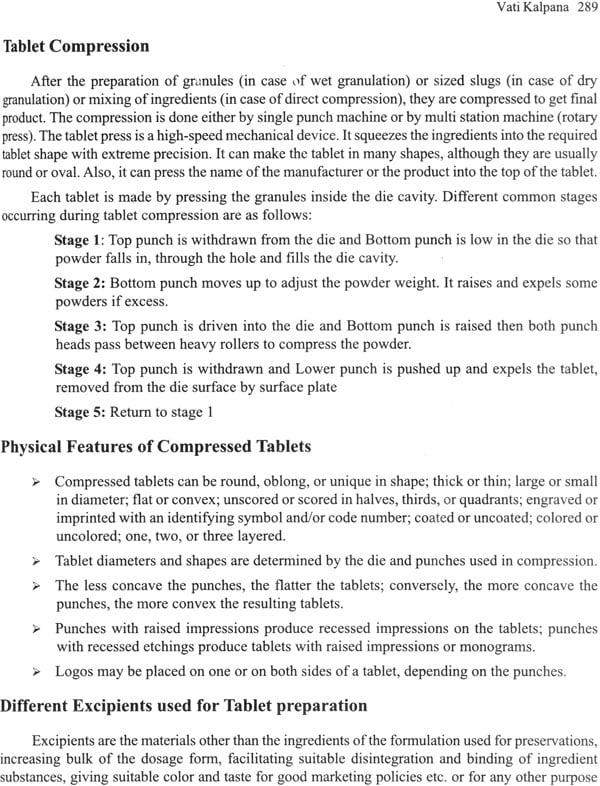 A Text Book of Bhaisajyakalpana (According to the Syllabus of Central Council of Indian Medicine)
By Dr. V. A. Dole
$23.20
FREE Delivery
$29  (20% off)