This book is a result of several years of intensive research which consisted of several visits to the pleasing hamlet of Osian, the libraries and museums of Rajasthan, Uttar Pradesh and New Delhi. Osian of today is a small town, but in its heyday, it was a bustling city and trade centre of Northern India. Here convoys brought grains and produce, the citizens were contented and happy. To demonstrate their love for God, for what He had given them, they built shrines and temples. The temples of Osian are comparable in beauty to those of Khajuraho and Bhubaneswar.

The temples of Osian, though in a poor state now, have preserved their record well. The temples read like an illustrated book. In this book, an attempt has been made to show what India was like during the reign of Gurjara-Pratiharas. The sculptures of Osian show us what people wore, how they amused themselves, how they worshipped, how they lived, what their social life was like and what they believed in.

This book is presented in sixteen chapters. Each chapter is self-contained and deals with a specific aspect of culture. Chapter One introduces the book, Chapter Two talks about the social life whereas Chapters Three through Six tell us about the dress, weapons, cosmetics, educational systems and how the people passed their leisure-time. Chapter Seven of the book deals with the economic life and Chapter Eight tells about the religious beliefs and method of worship. The major religions, including Hinduism and Jainism, are presented in Chapters Nine through Sixteen.

Asha Kalia was born in Multan, India, which is now in Pakistan. She received her education in the historic city of Lucknow. From the University of Lucknow, she received her M.A. and Ph.D. in Ancient Indian History. For her Ph.D. she explored the ancient glory of historic Rajasthan, in particular, the ruined but magnificent Hindu and Jaina temples of Osian. As a research scholar from the University of Lucknow, she was the first archaeologist to conduct a most comprehensive study of the region. In her investigation she was ably guided by Professor R.K. Dikshit. Her Ph.D. dissertation was reviewed by scholars of the Oxford University and eminent Indian art historians such as Dr Mulk Raj Anand. Her work was considered as a major contribution to the understanding of the socio-economic aspects of the 8th-12th century A.D. India and her work was recommended for a gold medal.

Following her Ph.D., she joined the K.D. Girls College and taught Ancient Indian History and Archaeology until her marriage in 1976. After her marriage, she moved to Chicago, U.S.A. At Chicago she is listed as archaeological consultant by a major international engineering and consulting company. In 1977 as a field archaeologist she conducted a field study in the Benguet province of the Philippines. The investigation was about the ancient regional practice of mummifying the dead and storing the mummies in highly decorated wooden boxes. The coffins were stored in natural and man-made caves.

To further her understanding and to broaden her horizon of 8th to 12th century A.D. Hinduism and Buddhism, she visited the ancient Hindu temples of Bali, the Buddhist temples of Borobudur, Indonesia, Thailand, and the ruined Buddhist temples of Pagan, Burma. Asha is a member of the U.P. Historical Society, India, and the Association of the Field Archaeology of the U.S.A.

Osia, the famed small village of temples located at about 34 miles north-west of Jodhpur, the imperial seat of brave Rathors of Rajasthan, is a place of attraction for tourists and art historians. According to tradition, it was known as Navaneri and Melapur-Pattana in ancient times. In the Upakeiagachchhapattavali, the place has been described as Upakesa, while an inscription of v.s. 1013 (A.D. 953) refers to it as Ukesa. In some other literary works, Osia has been mentioned as Upakesapura-Pattana and Uvaslsala. Apart from a glorious political history, it was also a place of great artistic and cultural activity during the early mediaeval period. Even now more than a dozen Hindu and Jaina temples embellished with magnificent sculptures dot this once prosperous town, which is mostly inhabited by the Oswala Jainas. The Jainas of the Svetambara sect regard it as a great tirtha and pious devotees from different parts of the country visit this sacred place for attaining religious merit.

Dr D.R. Bhandarkar was one of the early scholars who brought to light the enduring significance of these great temples and their sculptures in his learned article on 'The Temples of Osia', published in the Annual Report, Archaeological Survey of India, 1908-1909. These were built during c. 8th to 12th century A.D. Though much smaller than the Chandel la temples at Khajuraho, these temples are also built on high plinth and are very elegant in their architectural design. The figures of Gangs and Yamuna, the personified river goddesses, standing on their respective vehicles, the crocodile and tortoise, are carved on the doorways. The pillars are beautifully decorated with vase and foliage (ghata-pallava) motifs. The elaborately carved door-lintels have entwining cobras held by their tails by the winged Garuda in the centre and above this ma y be seen the planets in a row flanked by the lovers in different amorous poses. The ceilings are admirably decorated with various floral and geometric patterns similar to those in other Pratihara temples of Rajasthan and Madhya Pradesh.

The temples at Osia depict various Hindu gods and goddesses like Ganesa, Brahma, Vishnu, Siva, Surya, Lakshmi, Mahishasuramardini, Charnunda, Revanta, and the Dikpalas in their various forms and attitudes, some of which are exceedingly pleasing and iconographically important. Images of Vishnu in his different incarnations, viz., Varaha, Narasimha, Trivikrarna, Balarama, Garudarudha, Hayagrlva, Lakshmi-Narayana, Yoganarayana and Seshasayin are also found here. Interestingly, the uppermost terrace of one of the subsidiary shrines of Harihara temple No. I, which is of Panchayatana type, depicts the figure of Buddha in meditation on a lion-throne. This is the only image of the Buddha at Osia, wherein he has been conceived as an avatara of Vishnu, thus supporting the view of Dr A.K. Coomaraswamy that by the ninth century the Buddha had been absorbed in the Hindu pantheon. Some mediaeval writers like Srtharsba and Jayadeva have also included Buddha in the list of incarnations of Vishnu.

Like the Lakshmana temple at Khajuraho, the Osian temples are also famous for the depiction of numerous Krshruiyana scenes like the birth of Krshna, Putanavadha, Sakatabhanga, Kaliyamardana, Arishtasuravadha, Vatsasuravadha, Kuvalayapidhavadha, Govardhanadharl, etc. It is generally believed by the scholars that the Ramiiyana scenes do not exist at Osia, but some of these may be seen in the ceilings of the Sachiya-Mata temple at this site.

There are also the images of Siva, Nataraja, Hara-Gauri, besides some composite sculptures like Arddhanarisvara, Harihara and Hariharahiranyagarbha at Osia. The two images of Galnapati-abhiseka are quite important, as such icons are not yet known from other parts of north India. The sculpture of Ravana lifting Mount Kailasa is yet another elegant example, though, some good specimens of this have been noticed at Abaneri and the Sasbahu temple in Nagda in Rajasthan. The rare images of the Devi slipping anklets on her legs for dance, Durga as Chamunda killing the demon, Balarama riding on Garuda, Varuna seated on a hamsa instead of his usual vehicle the makara, are interesting from the iconographic point of view. Similarly, in an image of Kubera, carrying a citron and a nakulaka, a male figure is depicted as his vahana instead of an elephant, as in a contemporary sculpture from Bansi exhibited in the Udaipur Museum. The magnificent sculpture of Tripurantaka Siva and several other individual pieces from Osia have been shifted for display in the newly started Archaeological Museum at Mandor.

The Sachiya-Mata temple built on a hillock enshrines a black stone image of Mahishasuramardini-Durga. But the original idol was that of Kshemankarl, which is now kept in a niche on the back wall of the temple. A rare image of Sitalii, the goddess of small-pox, riding on a donkey and carrying a winnowing basket, may also be seen in this shrine. The scene of the churning of the ocean, the earliest example of which exists at Udaigiri, near Vidisha, may be seen here. Some other examples of this kind can be viewed on the Kalika-Mata temple, Chittorgarh, Ambika-Mata temple at Jagat and Kiradu in Rajasthan, and also at Badami., Pillalamarri and at Ankor Thom, Cambodia.

Besides the images of various Hindu and Jaina divinities, there are numerous sculptures which illustrate secular themes. Like Khajuraho and Bhubaneswar, a variety of hair styles of both male and female figures, different types of ornaments, cosmetics, costumes, conveyances, arms and armours, utensils, musical instruments, furniture, etc. are found represented on the temples at Osia, which shed a flood of light on the socio-cultural life of the people of that region which was famous for its wealth and prosperity far and wide.

The present study by Dr Asha Kalia, which deals with the socio-religious and economic life of the people of Osia during the early mediaeval period, is quite fascinating. She has made an earnest endeavour to discuss almost all the aspects of life as gleaned from the sculptural art of these rich monuments. Several line-drawings and photographs further enhance the value of this book. It was her great good fortune that she successfully completed this work under the able and mature guidance of the late Professor Ram Kumar Dikshit, a scholar of profound learning and wisdom. I am sure that this work of Dr Kalia, a result of her painstaking study for several years, will be welcomed by the scholars interested in the study of religion, art and culture of India, particularly of Rajasthan.

Osian is a small village in the Jodhpur district of Rajasthan. Formerly, according to local tradition, it had one hundred and eight Jaina temples, but except only one temple, all of them have perished. At present there are, besides the Jaina temple, fifteen Brahmanical temples including three small shrines, which belong to a period between the eighth and the twelfth centuries

In Northern India, the temples of Osian rank in importance next only to the Khajuraho and Bhubaneswar groups, the two well-known temple cities of mediaeval India. The Khajuraho and Bhubaneswar sculptures have been studied from different angles; but the Osian sculptures have not yet received the attention they deserve, for only general mention has been made by some scholars.

In this book, an attempt has been made to study the sculptures preserved at Osian, particularly in the light they shed on the social, economic and religious life of the people of the period they belong to. 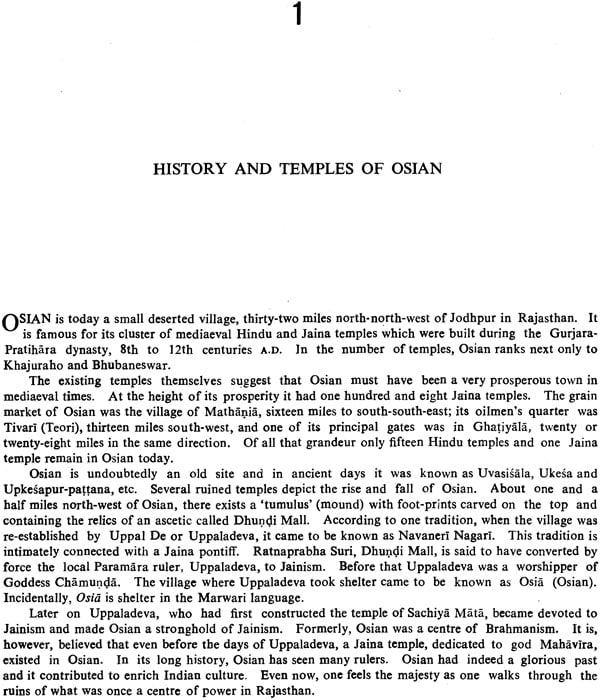 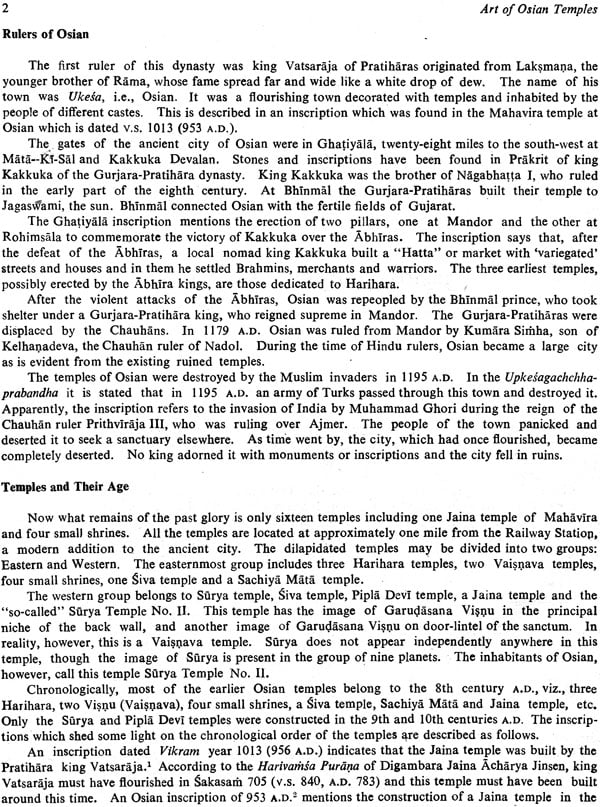 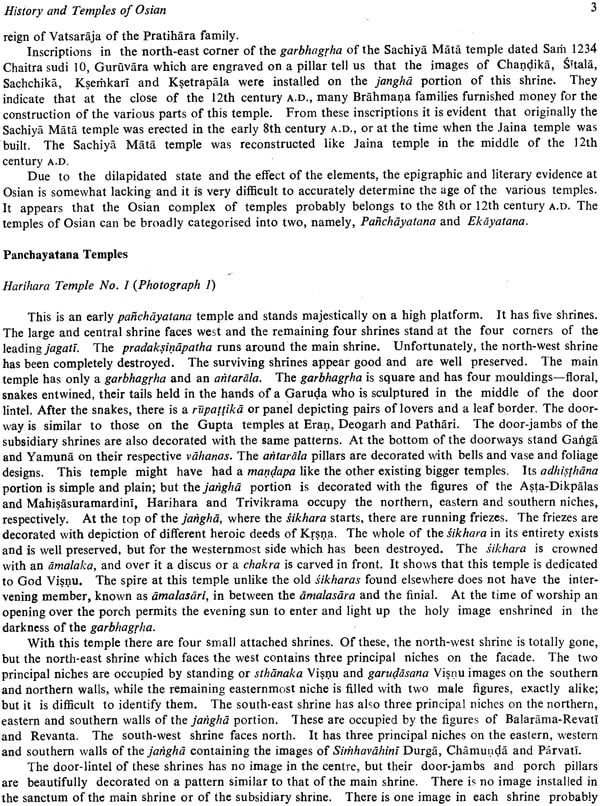 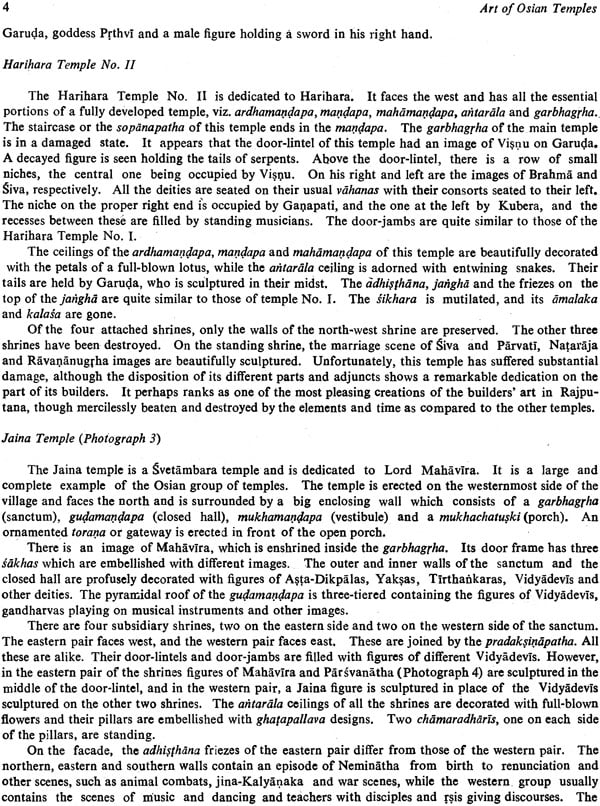 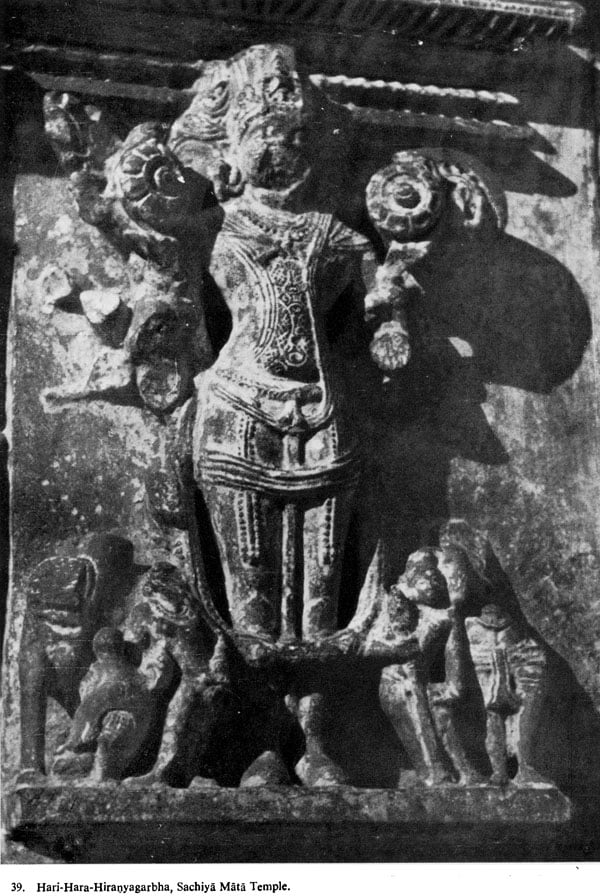 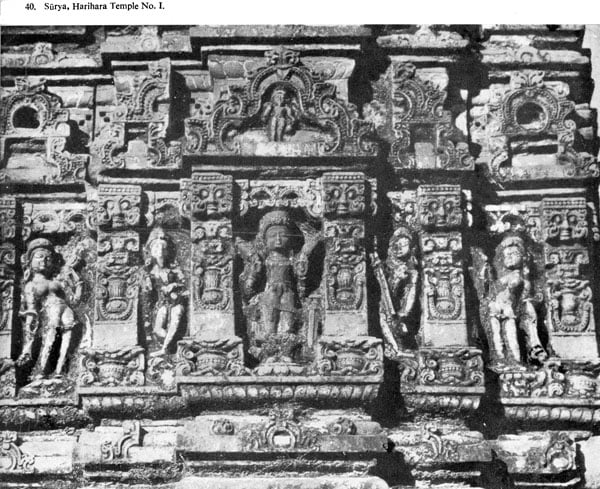 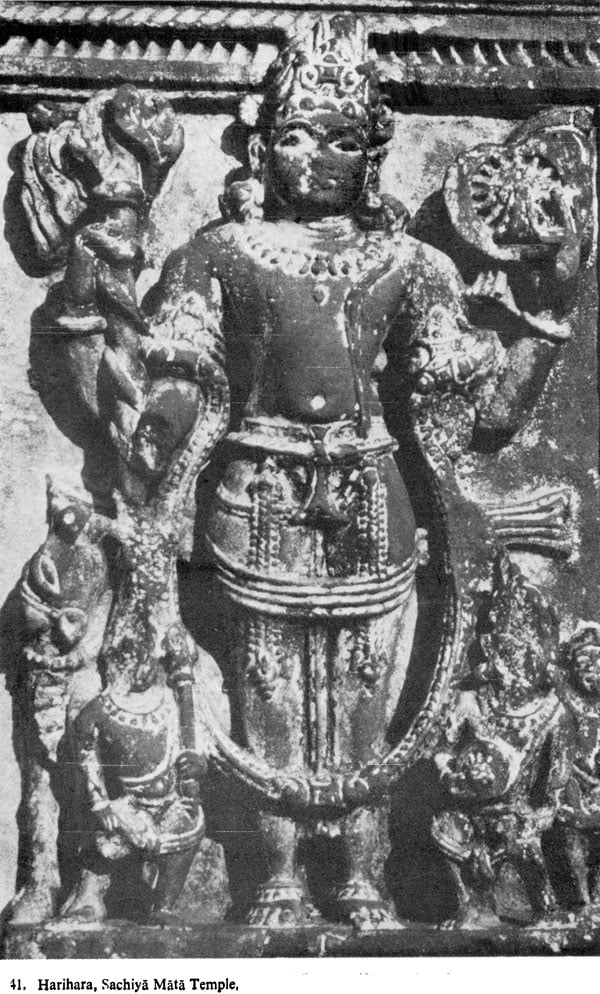 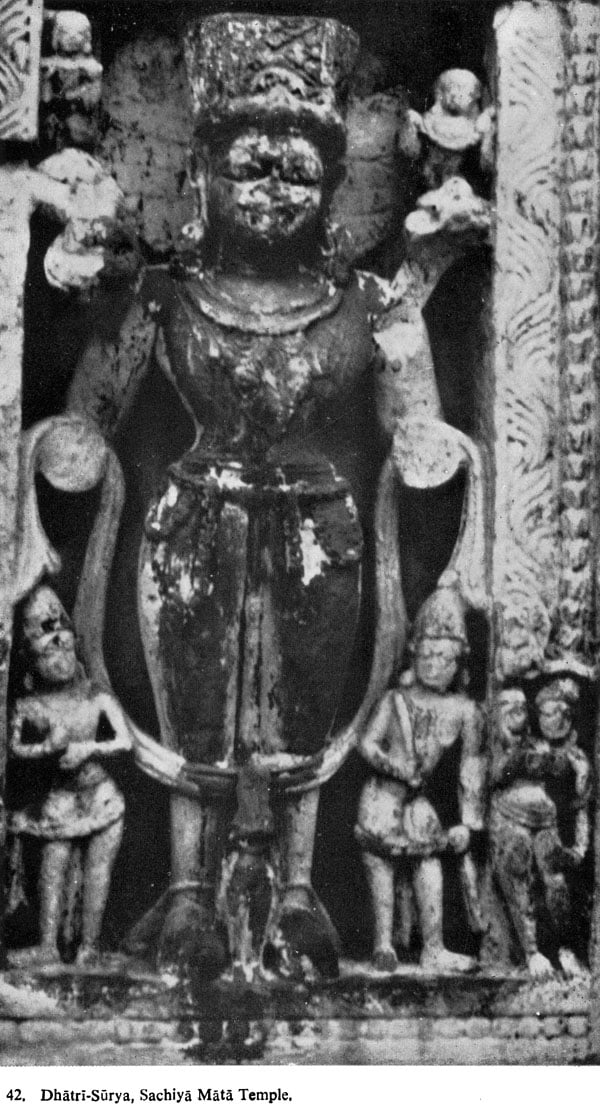 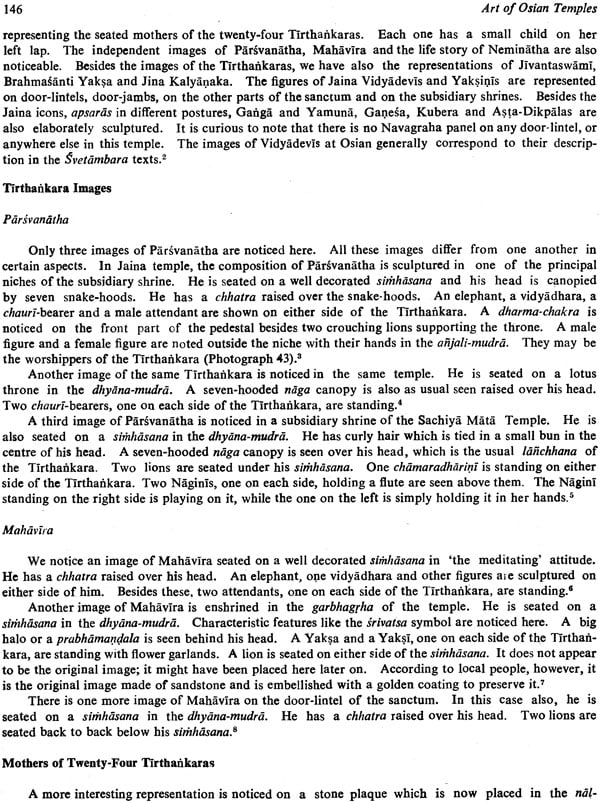 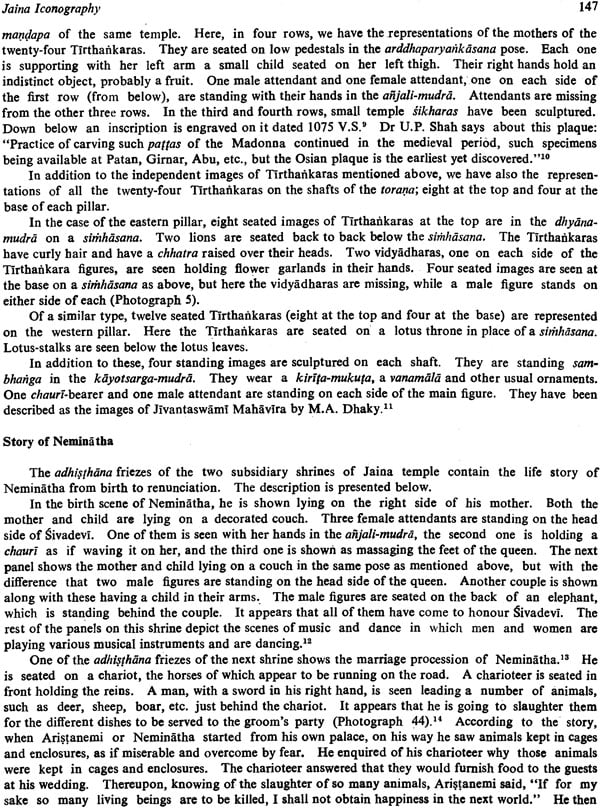 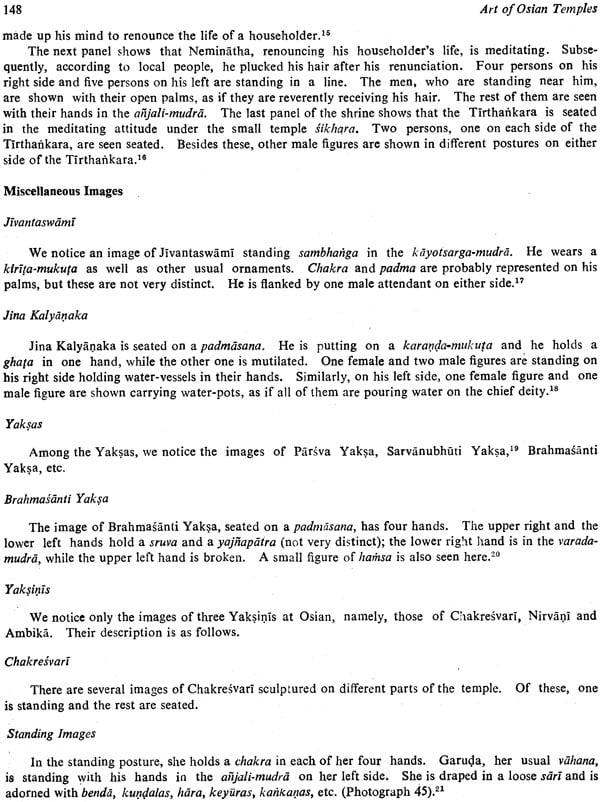 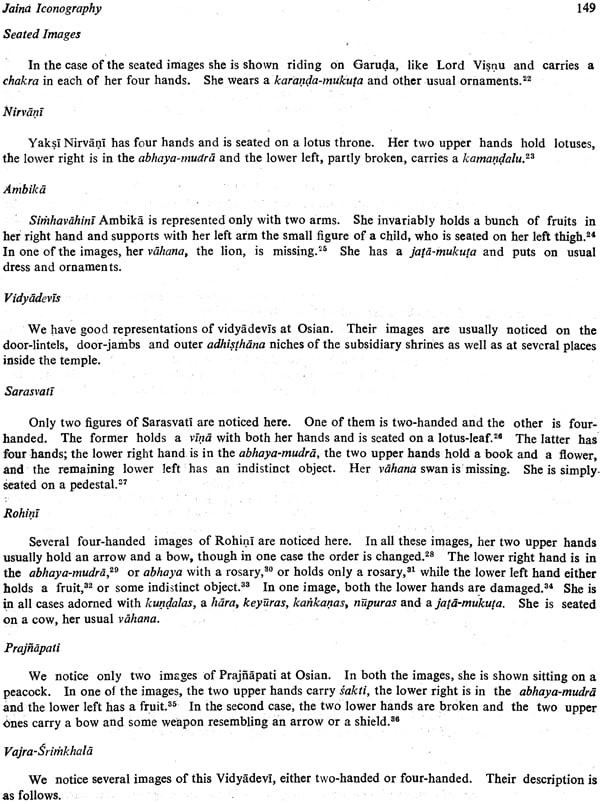 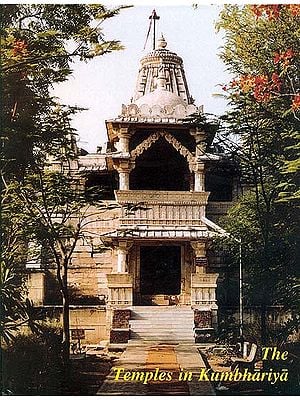 The Temples in Kumbhariya
By M. A. Dhaky and U. S. Moorti
$77
FREE Delivery 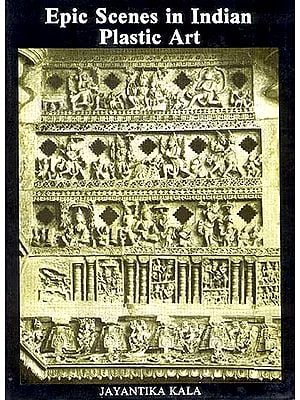