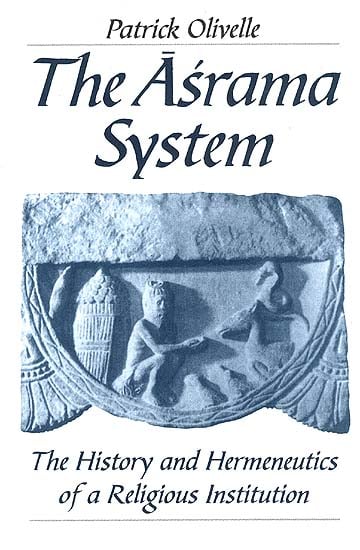 The lesser known and explored of the two pillars of Hinduism, varna and asrama, asrama is a system of four distinct and legitimate ways of leading a religious life: as a celibate student, a married house-holder, a forest hermit, and a world renounce.

In this, the first full-length study of the asrama system, Patrick Olivelle uncovers its origin and traces its subsequent history. He examines in depth its relation ship to other institutional and doctrinal aspects of the Brahmanical world and its position within Brahmanical theology, and assesses its significance within the history of Indian religion. Throughout, the author argues that the asrama system is primarily a theological construct and that the system and its history should be carefully distinguished from the socio-religious institutions comprehended by the system and from their respective histories.

Olivelle pays special attention to how the system was theologically reappropriated in diverse ways at different historical periods through the hermeneutic labors of exegetes and theologians. The Asrama System thus represents a major study not only of Hindu religious history, but also of the tradition of Indian hermeneutics.

In 1994 The Asrama System was the winner of the American Academy of Religion's Award for Excellence in the Study of Religion in the Historical category.

Patrick Olivelle is the Chair, Department of Asian Studies, at the University of Texas at Austin, where he is the Professor of Sanskrit and Indian Religions. Among his recent publications are: The Samnyasa Upanisads (Oxford, 1992); Rules and Regulations of Brahmanical Asceticism (Albany, 1994); The Early Upanisads: Annotated Text and Translation (Oxford, 1998); Dharmasutras: Annotated Text and Translation (Delhi, 2000); and Manu's Code of Law: A Critical Edition and translation of the Manava-Dharmasastra (Oxford, 2004). His translations of Upanisads, Pancatantra, Dharmasutras, and The Law Code of Manu were published in Oxford World's Classics in 1996, 1997, 1999, and 2004.

It has taken long, far too tong, to bring this project to completion. Some of the research was done during the academic year 1977—78 when a fellowship from the National Endowment for the Humanities and a Visiting Fellowship from Wolfson College enabled me to spend a year in Oxford, England, and Poona, India. Parts of the early chapters were written in 198 1—82 when I was back in Oxford, again on a Visiting Fellowship from Wolfson College, and in Poona, on a grant from the American Institute of Indian Studies. Many things—administrative burdens and other book projects—postponed its completion. Time has its own rewards: wisdom, one hopes, accompanies gray hairs, and maturity sometimes creates a better product. The long period of gestation, however, has produced its own debts—-debts of gratitude to teachers, colleagues, friends, family, and, yes, even institutions.

Much of the writing was done when! was a member of the Department of Religious Studies at Indiana University, Bloomington. The Department and the University provided a rare atmosphere for personal growth and intellectual stimulation. To my colleagues there a heart-felt thank you. The book was completed in my new home at the Center for Asian Studies of the University of Texas, Austin. The Center and the University have provided both good colleagues and fine resources. In India individuals and institutions, too numerous to list, always responded generously to my often importunate requests. I owe a special debt of gratitude, however, to the late Dr. V. V. Bhide and the staff of the Bhandarkar Oriental Research Institute.

Three friends put their friendship to the test by reading the entire manuscript closely and giving invaluable advice: Steven Collins, Anne Feldhaus, and Richard Lariviere. This book would have been much poorer but for their criticisms and suggestions. Gregory Schopen helped by stretching my imagination, if not my mind, in ways only he can. Richard Gombrich read chapter 3 and caught several inadvertent errors. The editorial staff at OUP——Cynthia Read and Peter Ohlin—was, as usual, excellent and obliging. Cynthia Carver, my punctilious copy editor, detected my every careless error and corn: pen sated for my sloppy nature. The book is the better for their help and advice. My wife Suman read the entire manuscript—she, like Cynthia Garver, has an eye for the detail. A special thank-you to Suman and my daughter Meera, who for many years have put up with me as gazed, glassy-eyed, at a computer screen.

The Brãhmanical tradition uses the term asrama with reference to what it sees as four distinct and legitimate ways of leading a religious fife. The four asramas are the modes of life of a celibate student, a married householder, a forest hermit, and a world renouncer. Brãhma9ical theology considers these ãsramas as constitutive and interrelated parts of an organic whole made up of the rules (dharmas) that govern human conduct; this organic whole is often simply referred to as dharma. The two cornerstones of dharma are the systems of dharama and varna (“social classes”). The totality of the Brãhmanical dharma is often referred to simply as Varnasramadharma, an expression that modem scholars and native interpreters alike have seen as the closest approximation within the tradition to what we have come to call Hinduism: “Even now,” observes the eminent Indian sociologist G. S. Ghurye (1964, 2), “Varnasramadharma, duties of castes and ãsramas, is almost another name for Hinduism.”

The system of the four vamas—Brahmana, Katriya, Vaiya, and Sudra—especially within the context of the related system of castes (fan), has been the subject of repeated study by scholars both Western and Indian. Sociologists and anthropologists, as well as Indologists and historians of religion, have made varna and caste the focus of intense scrutiny from a spectrum of methodological perspectives.

The parallel system of the four äsramas, on the other hand, has received much less scholarly attention, apart from platitudes repeated in general studies of Indian culture and religion.’ Nevertheless, the native tradition, as well as modern scholarship, considers the ãsrama system a pillar of the Hindu edifice. F. Max Muller (1878, 343), for example, with a touch of exaggeration claimed that the asramas were even more important an institution than caste: “A much more important feature, however, of the ancient Vedic society than the four castes, consists in the four ãsramas or stages.” Speaking of the äsramas, Paul Deussen (1906, 367) at the turn of the century enthusiastically exclaimed:

“The entire history of mankind does not produce much that approaches in grandeur to this thought.” Scholarly attention, unfortunately, has not kept pace with scholarly rhetoric. The few studies devoted to the topic are in the form of relatively brief articles and do little justice to the complexity of the subject or the sheer length of its history. Until now not a single book length study has been made of the asrama system. In this book therefore I have explored a relatively uncharted territory of the Indian intellectual and religious landscape in the belief that if this system is as important as native theology and modern scholarship take it to be it deserves to be studied seriously and responsibility.

My aim in this book is fourfold to uncover the origin of the asrama system to trace its subsequent history to describe its relationship to other institutional and doctrinal aspects of the Brahmanical world and its position within Brahmanical theology and to asses its significance within the history of Indian religions.

After dealing with some basic issues of method in chapter 1, I provide in chapter 2 the theological and historical context within which the asrama system was created. In the classical texts of Brahmanism and in modern studies of Hinduism alike the four asramas are presented as specific modes that a man is expected to assume during successive periods of his life. Accordingly the very term asrama is most frequently translated as stage of life. I demonstrate in Chapter 3 however that the asrama system originated as a theological scheme that presented four alternative paths of religious living to adult males any one of which they may freely choose. The asramas furthermore, were conceived as lifelong vocations and not temporary stages of a man’s life. In chapter 41 examine the historical and theological factors that may have influenced the radical change the converted the original system of asramas came to be considered stages of life through which each individual should ideally pass and chapter 6 discuss further developments and modifications that the classical system underwent in the course of history. In the final two chapter 7 and 8 I explore the growing interrelation between the asrama system and other central institutions of Brahmanism as well as medieval theological disputes and controversies surrounding that system.

The asrama system was created as a structure for inclusion for finding a place within the Brahmanical world to ideologies and ways of life that challenged many of the central doctrines and values of that world. The classical system in a special way was intended to blunt the opposition between the two value systems the one centered around the married householder and the other around the celebrate ascetic. The success of the scheme in resolving that basic conflict in Indian culture has been taken for granted by many scholars. I hope to demonstrate that a closer examination of the history of the system will show that the issue was never fully setteled and that old battles had to be fought over and over again throughout in Middle ages and down to modern times even after the asramas had become part of the mainstream of Brahmanical theology. 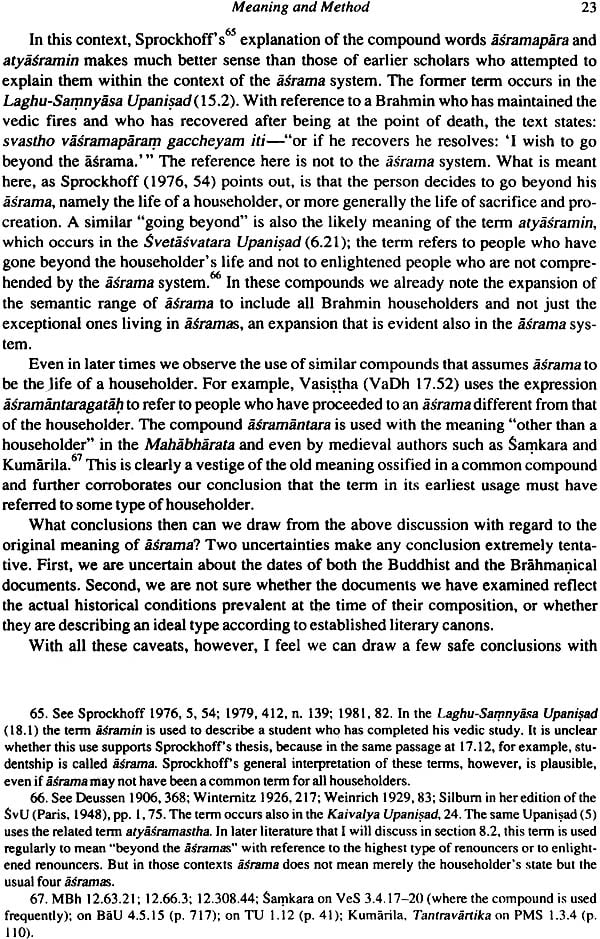 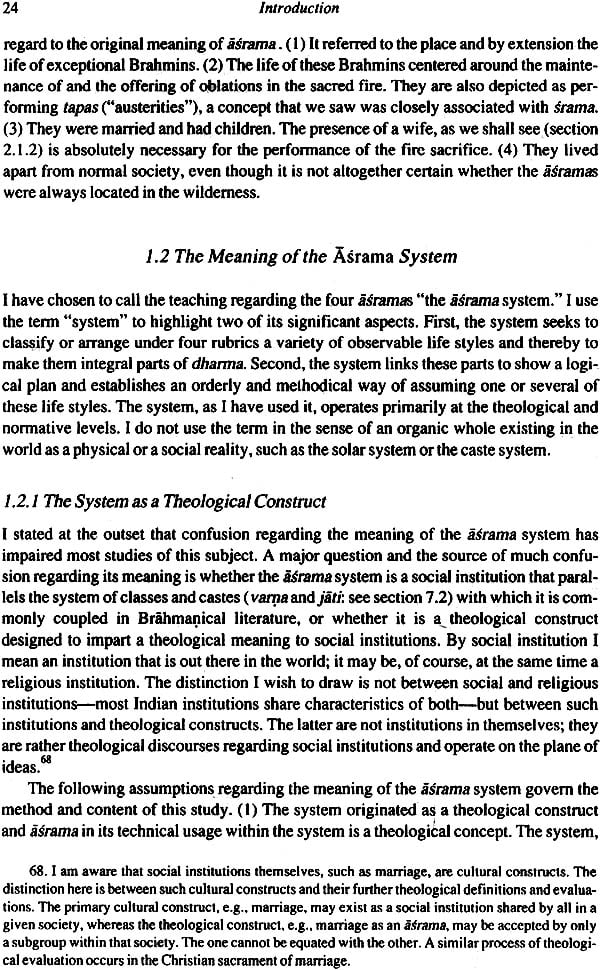 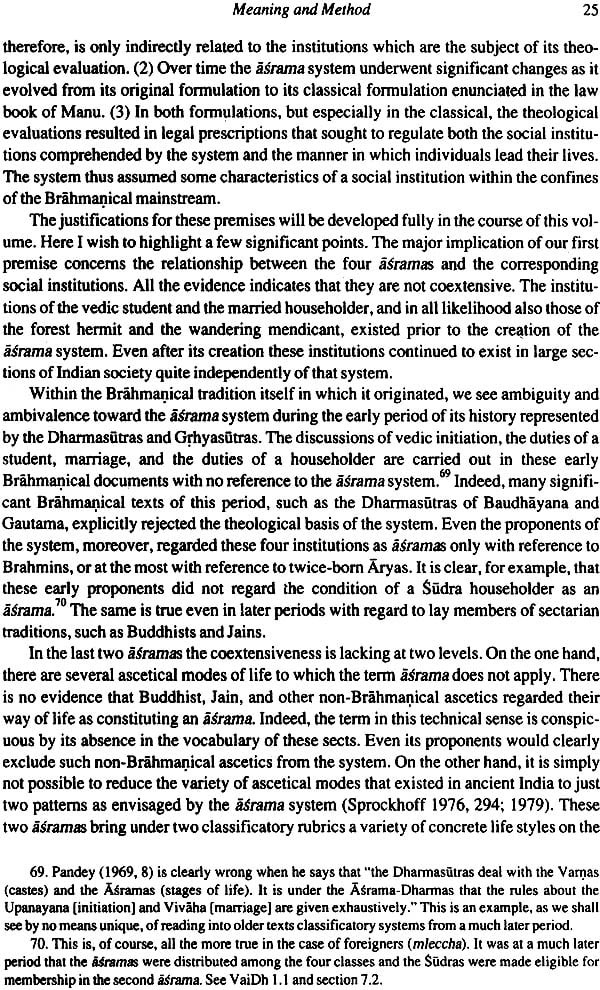 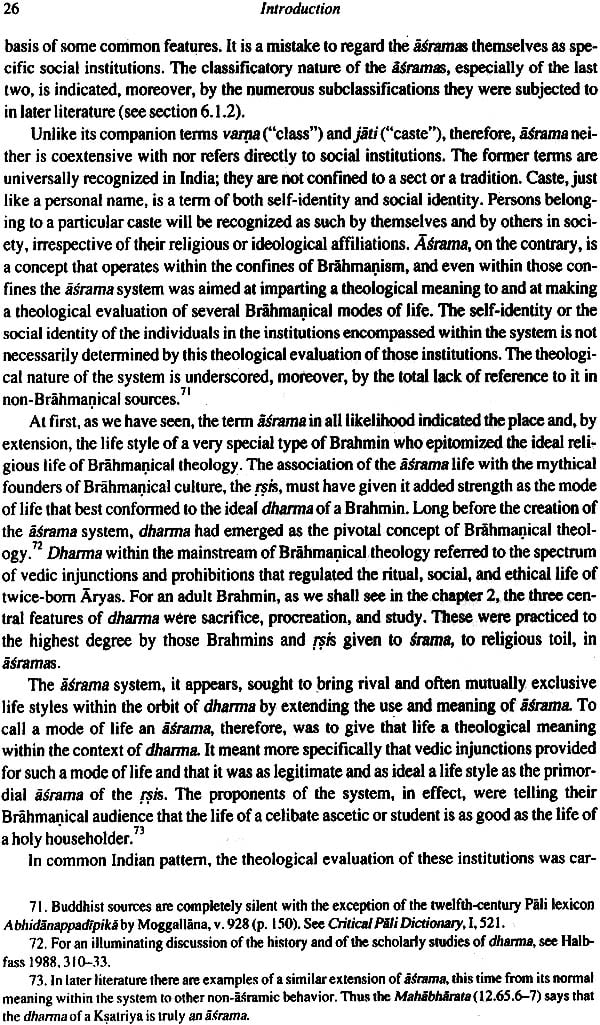 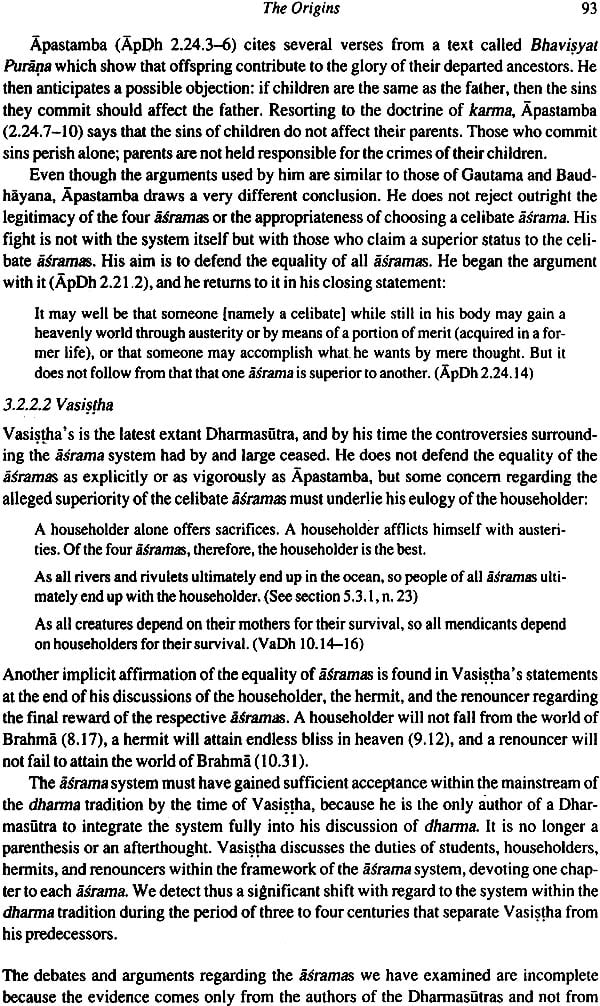 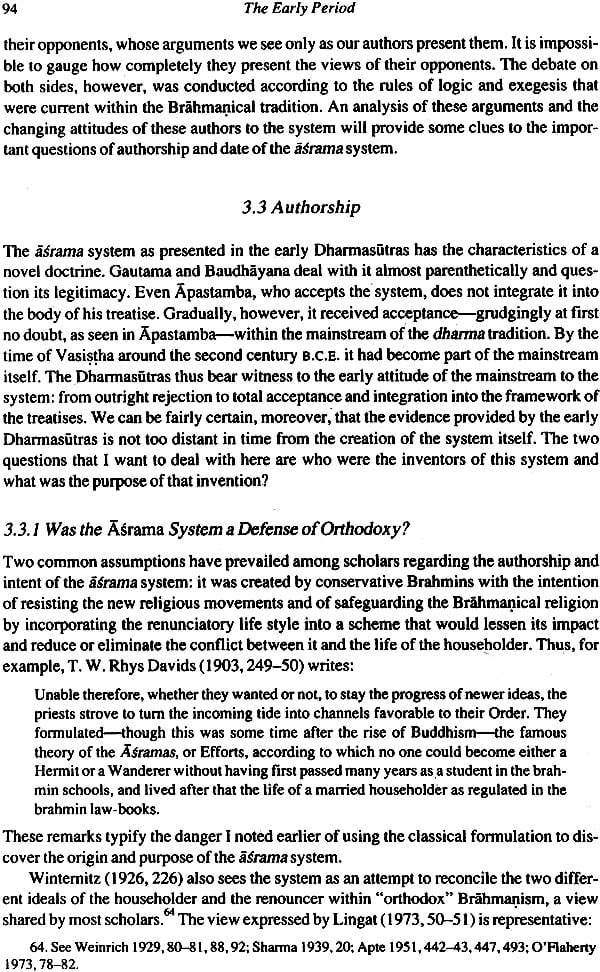 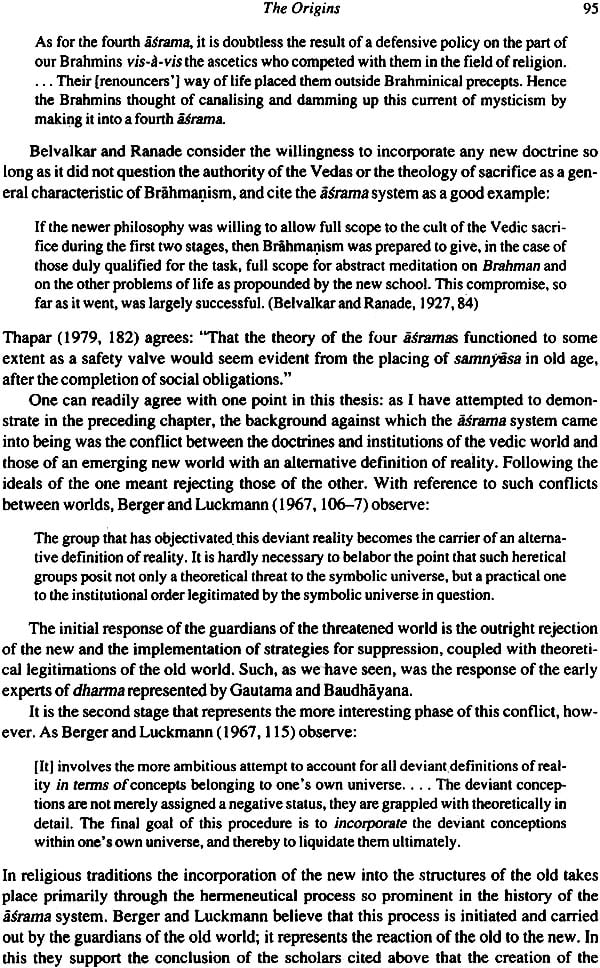 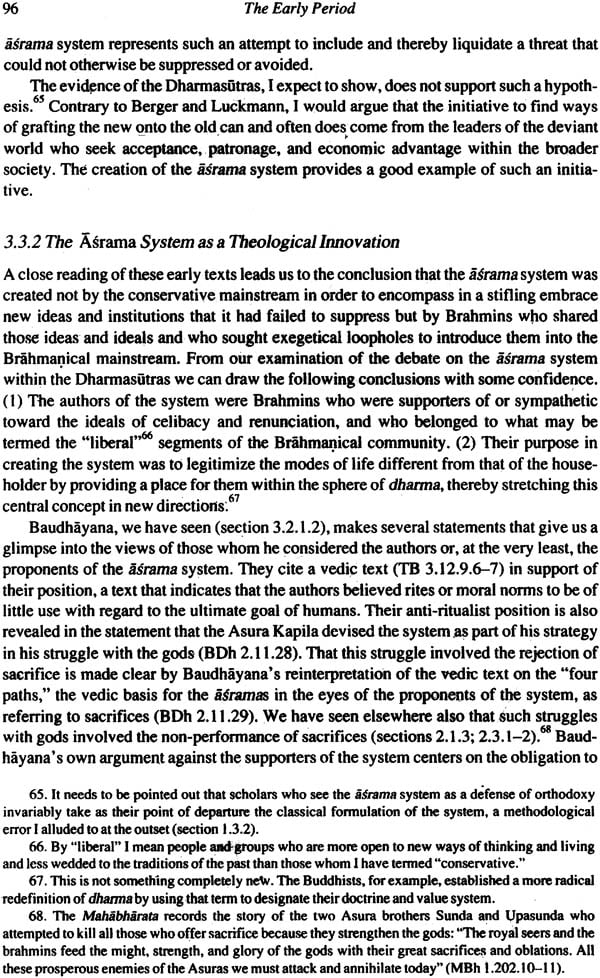 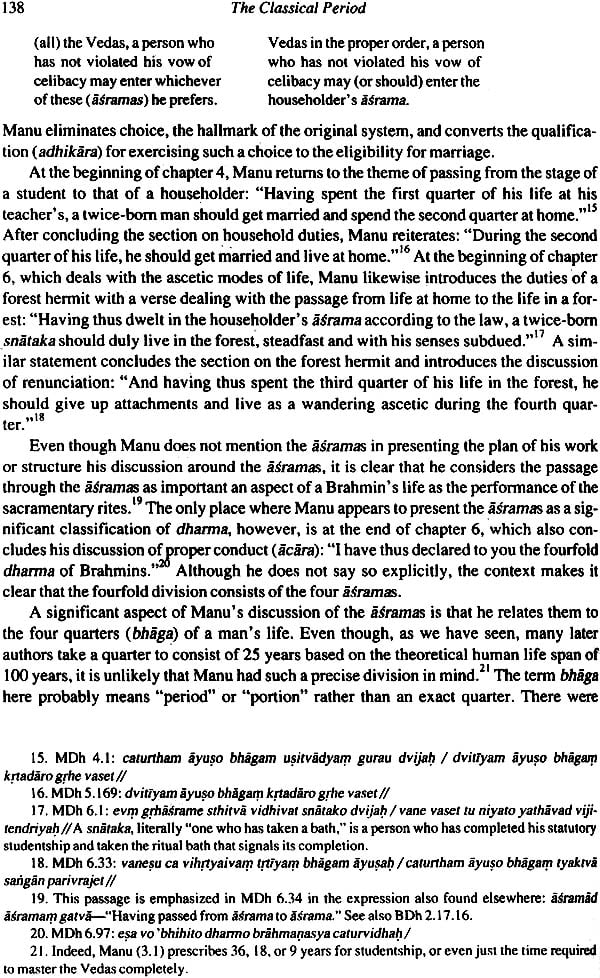 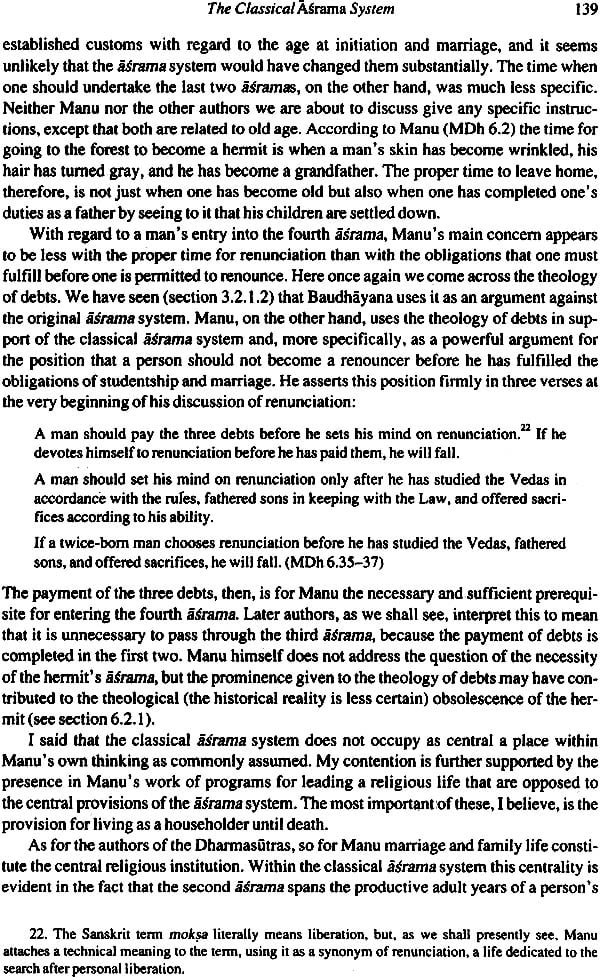 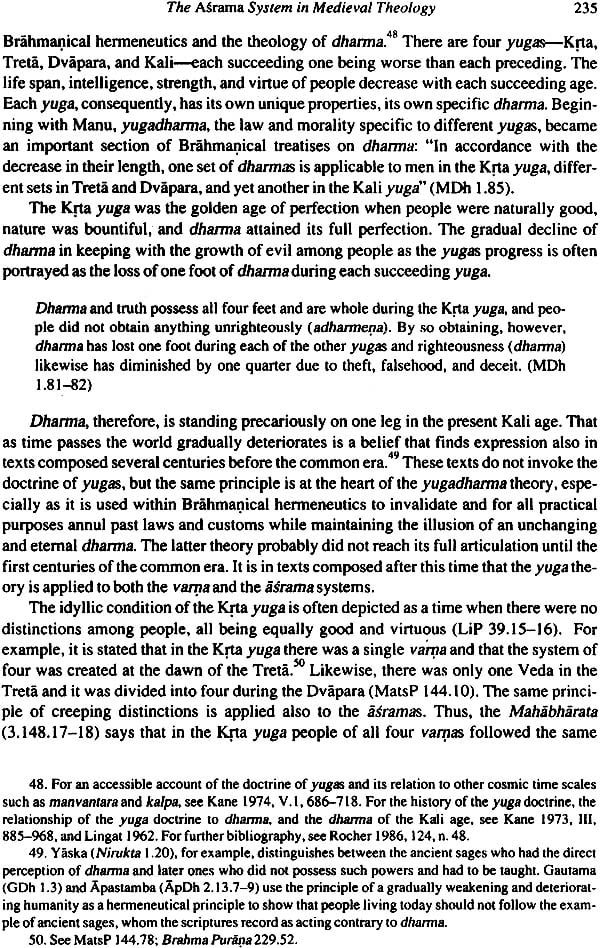 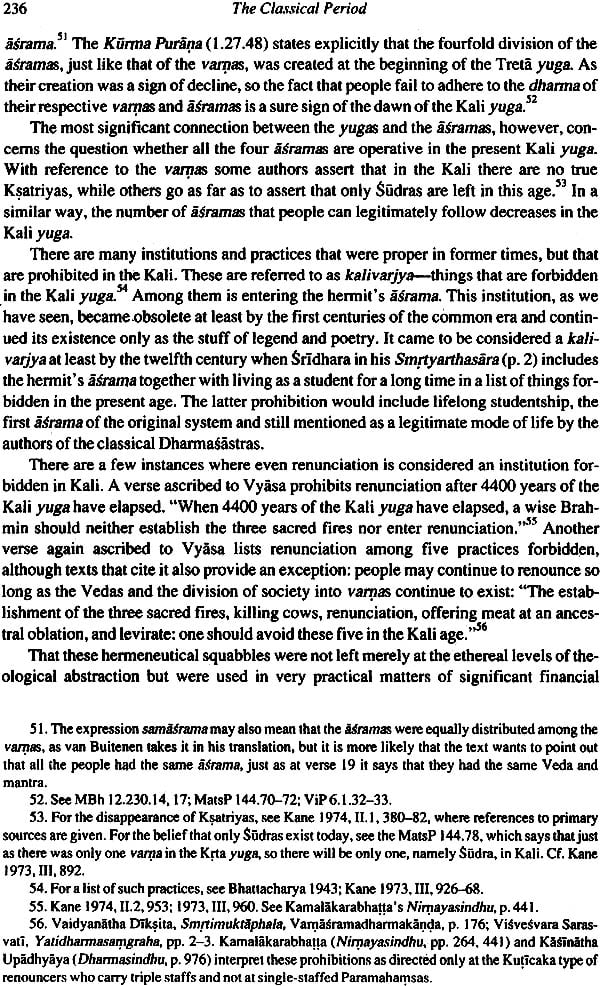 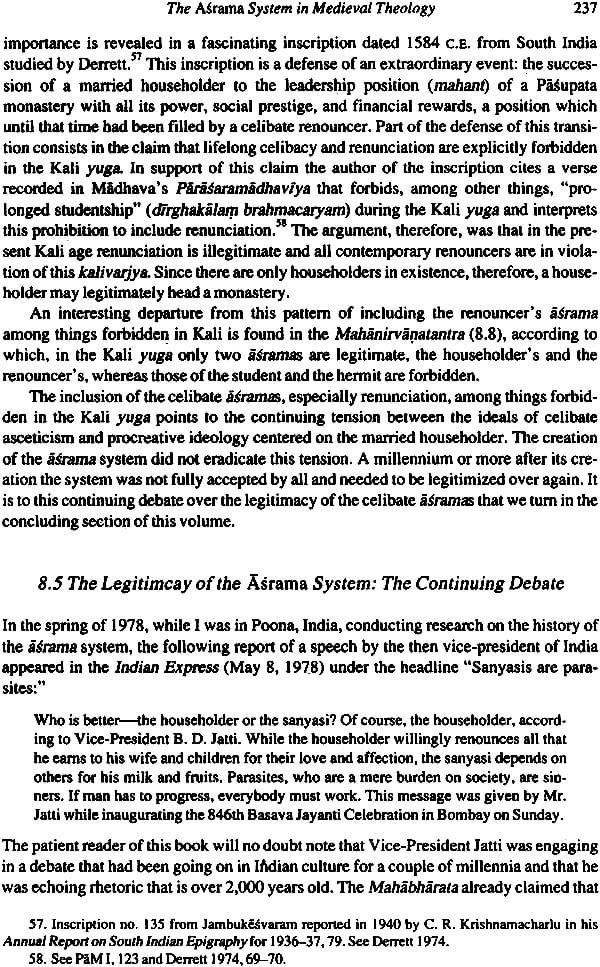 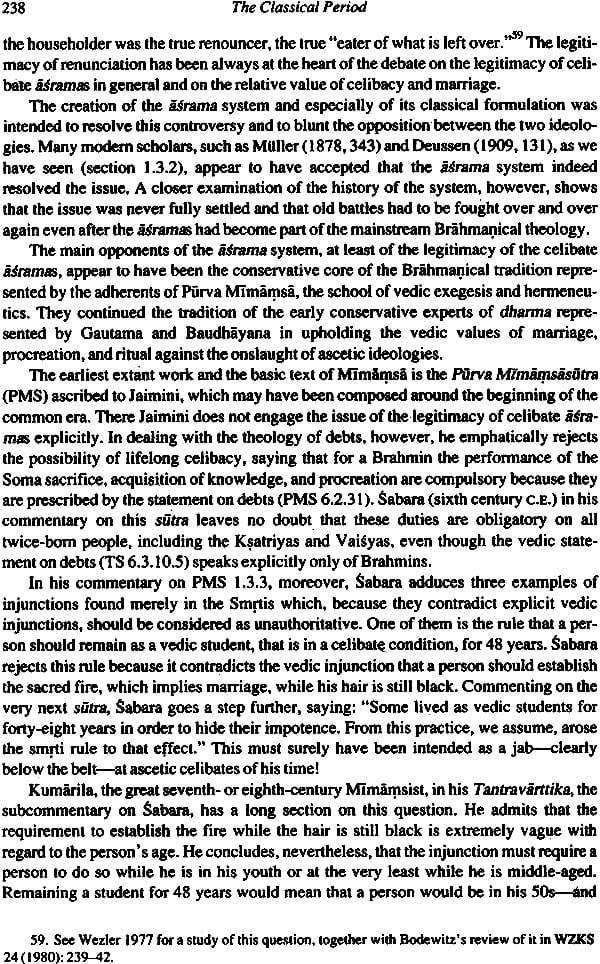