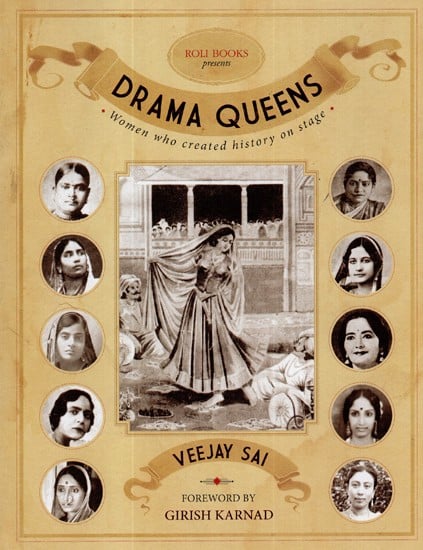 Drama Queens, Veejay Sai explores the lives of ten actors who, in the twentieth century, broke through the prohibition against women acting on public stage. It is tempting to start off by taking a quick look at the participation of women in Indian theatre through the centuries. The first chapter of the Naya Shastra, the oldest surviving text we have on dramaturgy, talks of how Brahma entrusted the Sage Bharata with the task of creation of the Art of Drama (Nayotpatti) in this universe, and asked him to proceed, with the injunction, 'You have a hundred sons (whom you can use).' Not much later, when a demand arose for more graceful movements, gestures and emotions, Brahma 'created from his mind' apsaras, celestial maidens wearing beautiful costumes and capable of beautiful music. The two statements spell out unambiguously the politics of gender as it has underlined our theatre history from the start. Theatre is a form built up essentially by men; women were brought in when the need arose for the sensuous element, but these women were brought il Bum outside the society, as the display of the erotic was considered a prerogative of a specially-created class of 'professional' women. 's daughters were evidently not welcome to take part in poem. In the last chapter of the same text, the sons of Bharata misbehave and mock the sages, for which they are deprived of that art form. They are cursed that they and 'their descendants to the last', along with their wives and children, will become impure (shudras) and will live as dancers, only to serve others. In effect, Brahmins, although they were entrusted with creating the form, were denied the right to practise it almost from the beginning, regardless of gender. Around AD 1000, Abhinavagupta explained that in the opening section of a play, the Sutradhara is referred to as Aryaputra (a very Brahminical form of address) by the Nati, even though the actor is a non-Brahmin simply because the role he is playing is that of a Brahmin. Around the eighth century, the entire performance universe of India underwent a radical change. Sanskrit drama came to an end. Socially, the Bhakti movement, which rejected Brahminical ritualism and caste hierarchy, swept through India - in the words of Professor AK Ramanujan, 'like a lit fuse', launching a new and vibrant millennium of performance in vernacular languages. The movement insisted that one could access God by simply singing out to him, and by surrendering oneself to dance and music. Though the prohibition of women from the stage continued, it was an era in which mass performances of dance and singing in praise of the lord was common. Women were prominent in these ecstatic celebrations. But Bhakti introduced a new twist in the aesthetics of performance. Saint-poets like Chaitanya insisted that since the objective of dance and music was total immersion in the godhead, any performance not connected with or directed toward God was reprehensible and therefore to be condemned. Simple entertainment, unconcerned with the Divine, became suspect or even 'sinful', an attitude that still persists in conservative homes. There are any number of examples. The author of the Kannada Krishnaparijata was excommunicated by his monastic leader for what was considered indulgence in vulgarity - until he proved that what he had produced was in fact a medium for propagating the Vaishnava faith. Faith became the criterion of acceptability in artistic public performance. I once talked to some rural women in the backwoods of North Karnataka about their film-viewing habits, and every one of them confessed that while they watched films often, they only enjoyed the mythological and did not much care for the 'socials'. Admitting that they had enjoyed a performance of a secular narrative was suspect, because godless entertainment was assumed to be basically corrupting. Perhaps that explains why non-religious forms - such as Doddata, Nautanki, Jatra and Tamasha - continued to freely employ women artistes, while in Yakshagana, Kathakali and Terukkuttu, women artistes continued to be excluded. The puritanism of the later Bhakti singer-poets is undoubtedly responsible for the sanctimony associated with many of our traditional performing arts. While the devadasi women have been dancing and singing through the centuries, it was only in 1933 that the first Brahmin women started singing in public in the South. The -next radical change in our perception of women artistes came with the colonial theatre, which provided the model for urban entertainment in the second half of the nineteenth century. Veejay Sai mentions that the Irish actress Mary Fenton was the first woman to perform on stage in Mumbai, but while the white woman set the tone of what was acceptable on a public stage, it was undoubtedly the participation of 'memsahibs' - wives, sisters and fiancés - in the enclosed performances held at colonial clubs, exclusive to the members of the ruling community, which made the woman on stage a figure of acceptable modernity. The participation of women and the weeding out of female impersonators was surely sped up by the arrival of movies, a medium in which a male playing a female character was hard to accept. I grew up in the wilds of the Western Ghats where, along with petromax lamps and roll-up curtains, men enacting female roles was still customary until the late 1940s. I remember people arguing that they found an all-male cast preferable to women acting female parts. But by the end of the decade, women had taken over. In Drama Queen. Veejay Sai not only deals with the lives of artistes who weathered this century of transition and laid the foundations of a whole new aesthetics, he covers the entire panorama of theatre across the country, in different languages and cultures, detailing the stresses as well as the richness of their work, the financial and social challenges they faced, and the glorious legacy they left behind. The research is awe-inspiring, the documentation stunning. This is a document long overdue.

For the longest time in modern Indian theatre, as it is seen today, there was a serious inexplicable vacuum when it came to finding stories of the real people behind significant events. First there was the age of great Sanskrit drama that gave Indian theatre a vast heritage of plays and playwrights to look up to. However, the tradition of written plays stopped after eighth century and royal courts that patronized Sanskrit drama gradually switched to vernaculars. The Bhakti Movement that began in the Tamil-speaking regions of peninsular India along with several other socio-cultural movements aided in the growth and nurturing of local performance practices. Forms like Yakshagana, Kathakali, and Koodiyattam flourished in little pockets across south India. With the rise of local literatures in languages like Tamil, Kannada and Telugu, theatre traditions also gradually evolved. Following that, for the longest time there was a severe pronounced absence of any activity to do with written Sanskrit drama and theatre for centuries on end till the eighteenth century. However, regional language theatrical forms and practices gathered momentum along with music and dance. But unlike Sanskrit drama of the earlier era, texts were not available as oral traditions became prominent. According to one theory suggested by playwright and director Girish Karnad, Sanskrit was a pan-Indic language that followed a written format. One of the many reasons for this was because most of the actors who belonged to lower castes could not improvise in Sanskrit. They had to learn the texts by rote. This gradual growth of regional language theatres was not a national phenomenon. By early nineteenth century, theatre became the main source of entertainment in the region called 'India' before 1947. With generous royal and feudal patronage, scores of drama companies sprouted all over the country. The theatre economy was bursting forth so much so that at one time investing in a drama company was a role model for success. This gradually gave way to the more popular medium of cinema in the early twentieth century. The year 2012 completed two centuries of active life of the Indian proscenium theatre. Scores of artistes have spent their lifetimes to the service of this art form. In the presumption that the 'art is bigger than the artiste', many lives have gone unnoticed, unwritten and forgotten. The beginning of nineteenth century saw more than an artistic fervour in the sphere of India's performing arts and artistes' communities. Women artistes, as on record, penned the first autobiographies. These were figures marginal to the national narrative. Most of these stories also stayed hidden in non-English language literature and press and hence escaped notice beyond their circulation amongst a small closed circle of enthusiasts. Most of these stories preserve memories of an era gone by of performances, personalities and a cultural economy that once prospered across rural India and a newly-emerging urban India. Actors like Binodini Dasi (1862-1941) had managed to serialize their autobiography (Amar Katha) in popular publications like Nayamandir (1910) and Roop o Rang (1925) but most of these magazines and papers favoured scandal, allegations, and diatribes and often fabricated life stories of these actresses. Many other actresses in the south were treated with much contempt from caste-ridden conservative societies. The only women who 'performed' in public belonged to courtesan cultures and backgrounds whose morality was questioned by the newly-formed legal establishments in India. Most of these women belonged to that world of performance practices where they negotiated patriarchy, paradoxically with greater levels of autonomy as well and their own struggle. In Europe and even in America, this time was significant in the growth of performing arts, particularly theatre. Figures like Sarah Bernhardt achieved unprecedented fame. Her contemporaries from India remained largely unknown even outside their own geographical boundaries. In the decades before India's independence, several women took it upon themselves to design and redefine what arts were going to be like, thereby becoming a part of the mainstream narrative of arts history. **Contents and Sample Pages** 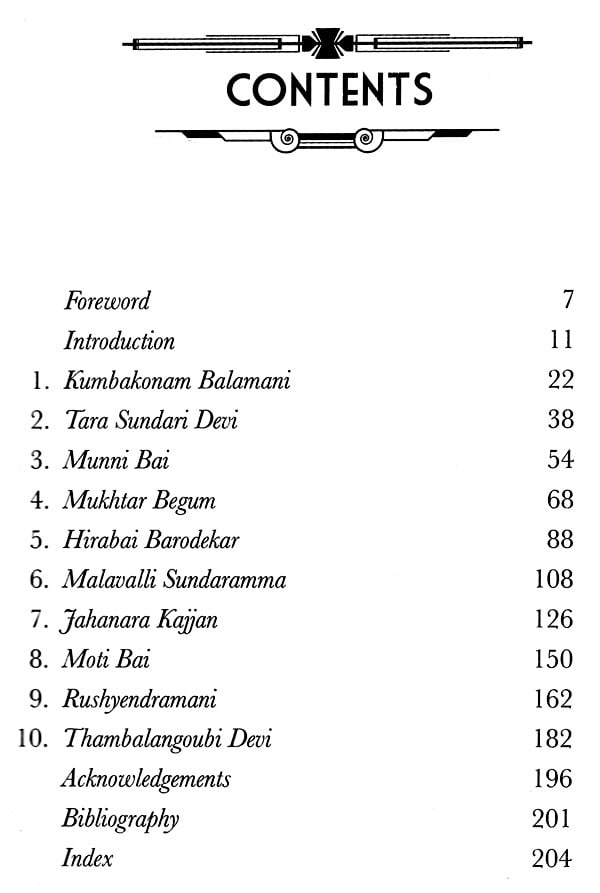 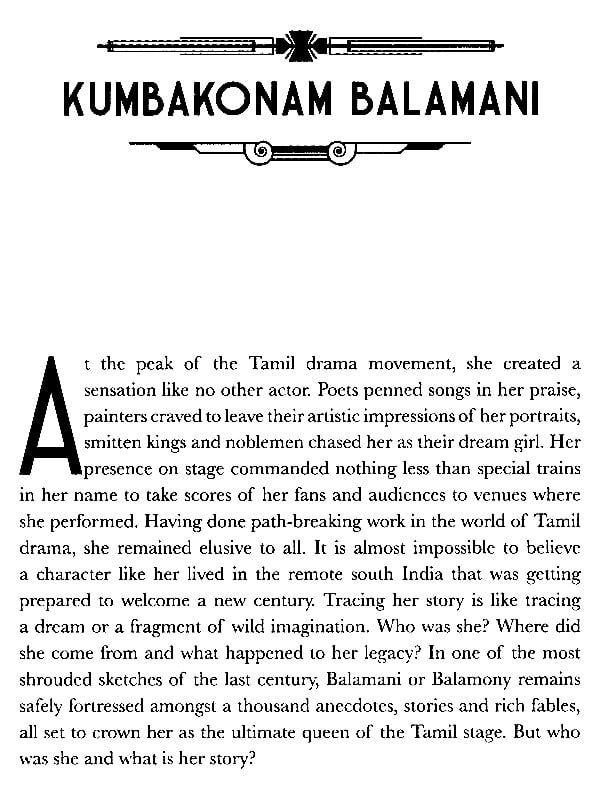 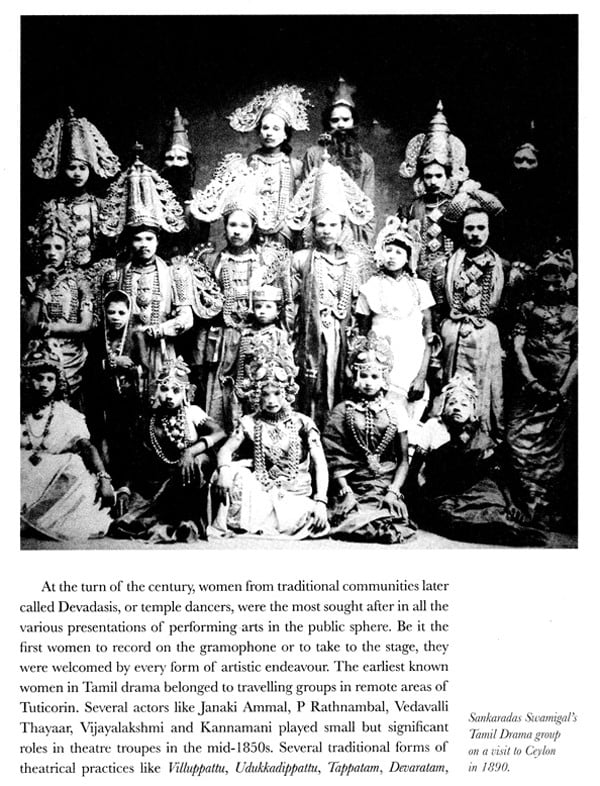 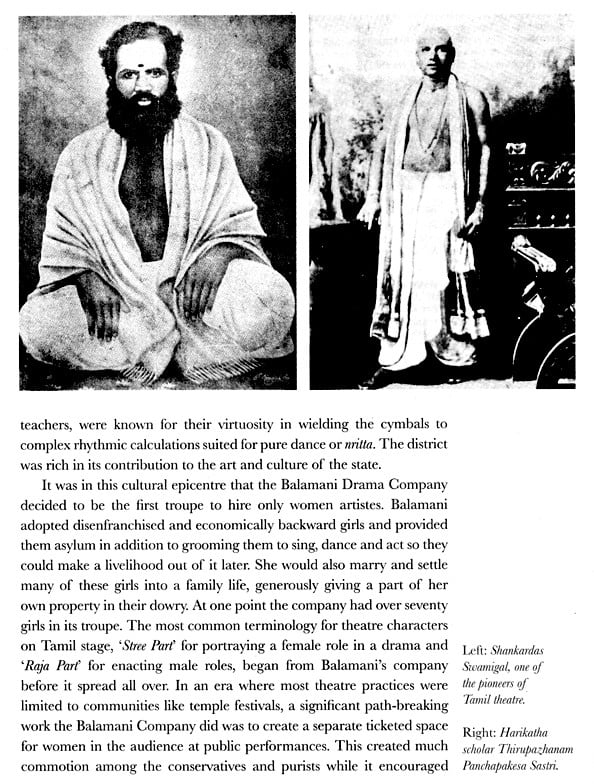 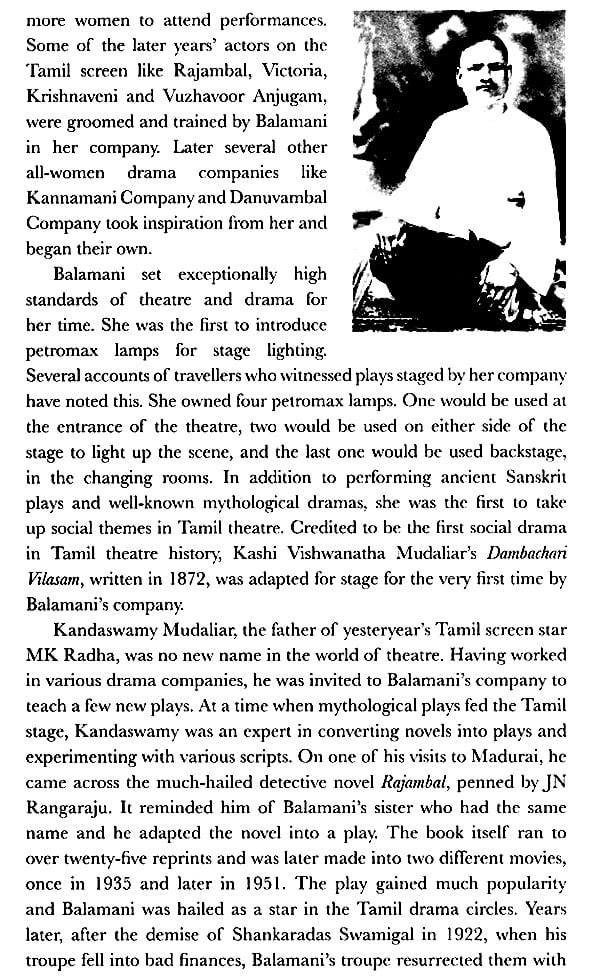 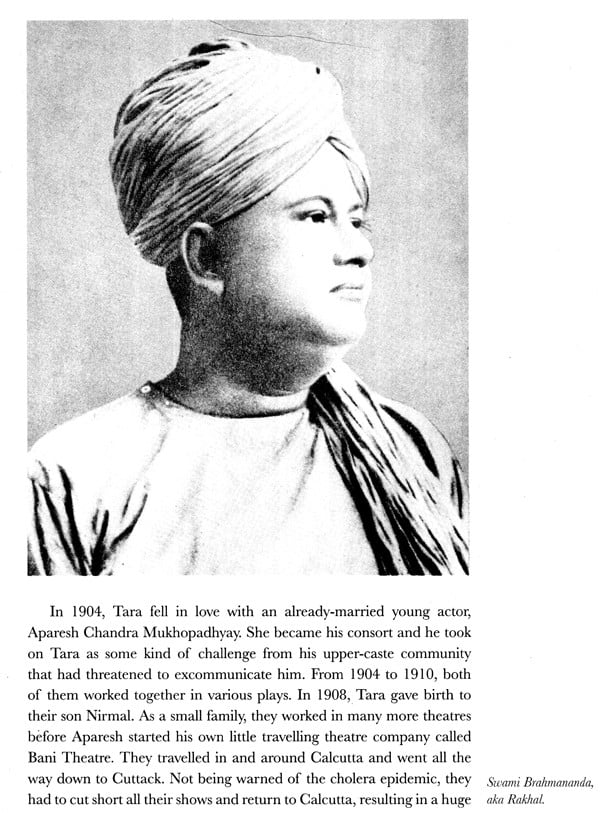 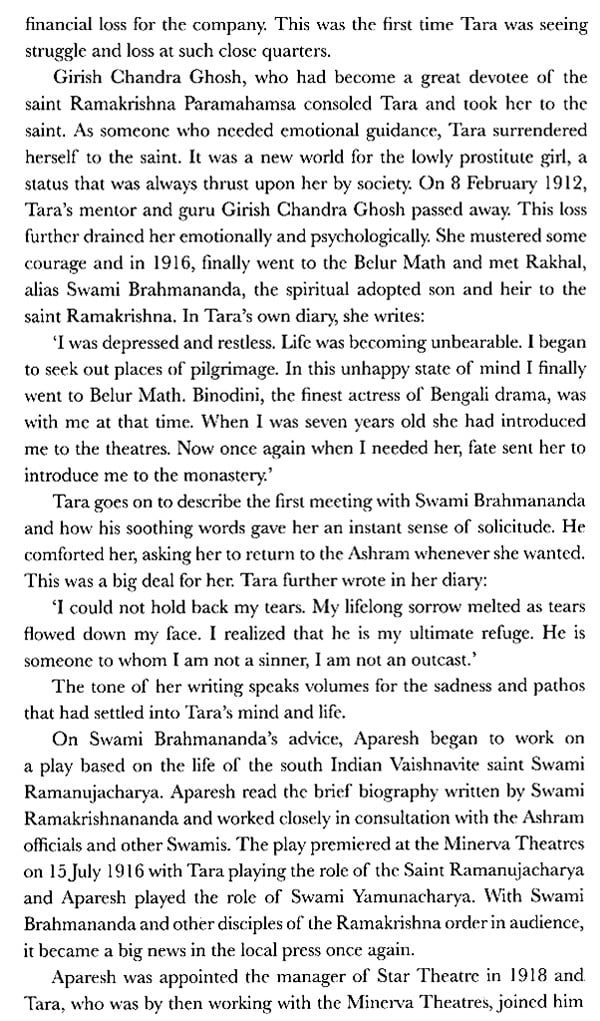 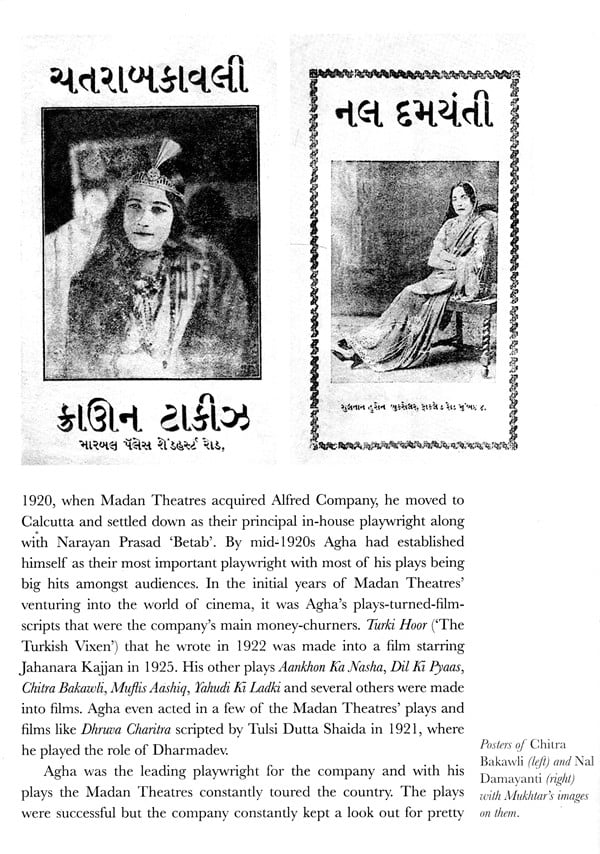 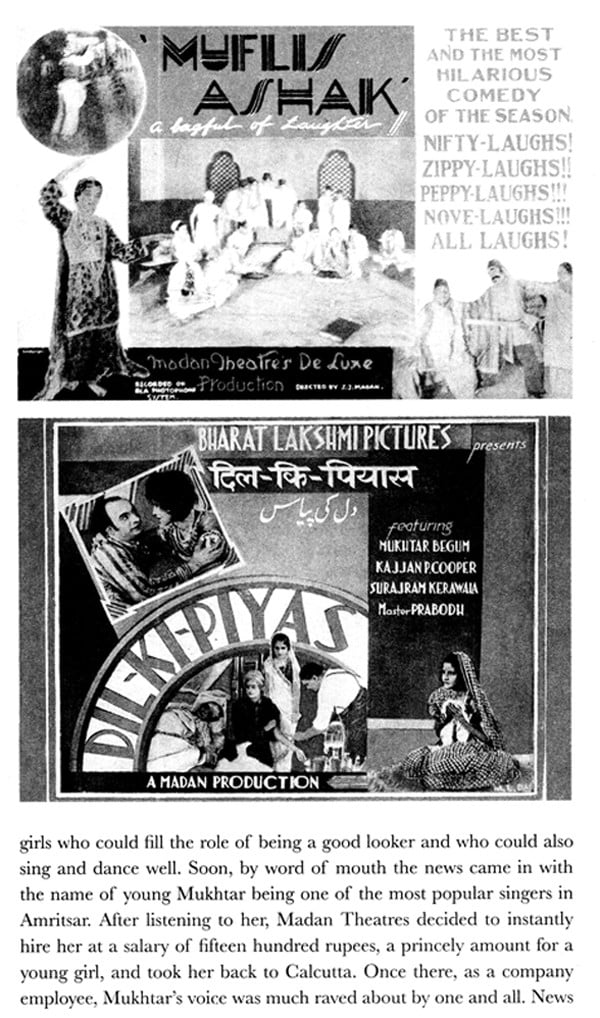