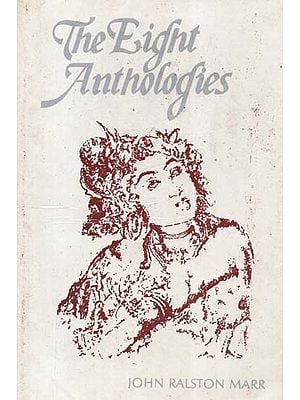 The Eight Antholologies: A Study in Early Tamil Literature (An Old and Rare Book)

$35
FREE Delivery
Quantity
Ships in 1-3 days
Notify me when this item is available
About the Book
A work of matured scholarship, Dr.John Ralston Marr's THE EIGHT ANTHOLOGIES: A Study in Early Tamil Literature is unique in several aspects and its utility to the student ancient Tamil Literature is manifold. Judiciously employing the tools of comparison and analysis, Dr.Marr has brought in a number of fresh .insights to bear on the Cankam literary scholar-ship. The most valuable contribution of this book is its attempt at reconstructing the historical map of the ancient Tamil country from the corpus of these poems. There have been pain-staking efforts at clearing the Historical Obscurities that characterize several of these poems. He compares the ancient Tamil tradition with the contemporary Sanskrit tradition and comes to the conclusion that the former is largely indigenous.
About the Author
A renowned Indologist, Dr. John Ralston Marr has been teaching at the school of Oriental and African Studies, University of London. He is a versatile scholar in Tamil and Sanskrit literatures as also in Karnatic Music and Iconography. He had for sometime been specialising in Tamil Studies at Anna-malai University. In his practice of criticism there is a happy synthesis of Ontological, Historical and comparative approaches.
Back of the Book
Three years ago, the Institute of Asian Studies, the brain-child of a few distinguished local and foreign scholars was established. This research Institute first of its kind in India and one among the few research organisations of the world proposes to undertake a systematic study of Asia from varied angles.

The utmost need of the hour is international unity and the Institute also contributes its might in bringing about it, in its own, unique way. The aim of this research Institute is to focus on the greatness and richness of Asia and this we propose to do in isolation and in comparison to the western thought, ideology, concept, culture and literature. While studying Asia, the Institute wants to give an accent on literature that studies mankind, religion that offers solace to mankind and culture that refines mankind. Literature is the product of a cultured human mind and to study the literature of any language in isolation will be of no avail. So the Institute proposes to introduce one after another the teaching of all Asian languages and literatures. It also proposes to undertake translations of great works, literary, philosophical, theological etc., and this would bring to light the essence of humanity which is beyond all the man-made petty barriers.

As a first step towards achieving this goal the Institute has started separate departments for Tamil, Kannada and Buddhism and every department has its own research projects. In the near future, departments of Hindi, Telugu, Japanese, Korean, Thai, Sanskrit and Christian studies would be started. The Institute is working on another project, the Publication of Handbook of Asian Studies which consists of all relevant details about present and erstwhile scholars of Asian Studies and this book is prepared in such a way that it should be the most sought after 'book by any scholar who works on any field of Asian Studies from any part of the world.

The Institute of Asian Studies, designed as an International academic centre, through its research work hopes to show the world the homogenous nature, of Asian Culture which in a way proves the basic essence of humanity.

Foreword
The Institute of Asian Studies, established as it has been to promote interdisciplinary investigation of the cultural facets of the different Asian countries, has for its central objective the intellectual quest of seeing the oneness of the Asian mind through the separateness of its component parts. The various research projects that are being undertaken by the different faculties of this Institute are steps toward the realization of this ideal. The avenues of scholarly pursuit are however not restricted to the cross-cultural studies of this continent alone. For, compartmentalization of any kind is alien to the pursuit of scholarship in its truest sense. The Institute has opened its doors of investigation to studies of a given component of Asian art and culture in relation to a similar component of a non-Asian culture. As such, this Institute functions as a Centre for interaction and intercreativity of different traditions of human creativity and ingenuity.

Publishing industry cannot but be a part of the activities of an Institute of this nature. It is largely through the printed page that the fruits of intellectual creativity come to see the realization of its objectives. The Journal of Asian Studies of this Institute is the first step in this direction. Apart from making available the results of research in Asian culture all over the world, this Journal is intended to be a potential forum for the interaction of the Orient and the Occident, the East and the West. The scope of this Journal is nevertheless limited, insofar as it confines itself to aspects of current literature and scholarship. There have to be the results of extended labour, past and present, in printed form for the benefit of the people at large. And this book of Dr. John R. Marr represents the fulfillment of this need.

An Indologist of standing, Professor John R. Marr represents an intellectual culture which is of immense significance to Tamil studies.

Preface
This book is a study of the Ettuttokai, the eight Anthologies, and an attempt to assess their value both as historical material and as literature.

To this end, special attention has been paid to the two anthologies among the Ettuttokai that consist of poems addressed to various kings and chieftains of the Tamil area. These are entitled Purananuru and Patirruppattu. Many of the conclusions of modern writers in regard to the events mentioned in these poems have been based on secondary material associated with Purananuru and Patirruppattu such as colophons and patikams, which are probably of later authorship. Such material has, accordingly, been separated in this study, and, in the case of the patikams to the decades of Patirruppattu, is discussed in a separate chapter. It is felt that, in the absence of contemporary epigraphical material, it is not possible to be dogmatic about the dating of events described in Purananuru and Patirruppattu or of the poems that mention them.

For the sake of clarity, the poetic conventions observed in bardic and love poetry of this period are discussed first. Discussion of Metre is, however, held over until Chapter X, since it is not of first importance to the study of the subject-matter of these poems. It is suggested that Tamil metre had close association with musical time, and that Ictus may be observed, especially in the metre called Akaval.

It seems fairly clear that, while preserving much that is unique to the Tamil area such as the conventions about the subject-matter of bardic poetry called Purattinai, these poems show that the synthesis between Tamil culture and what may loosely be termed Aryan culture was already far advanced. Evidence of this in the two anthologies under special reference has been duly noted throughout the poems of Purananuru and Patirruppattu. 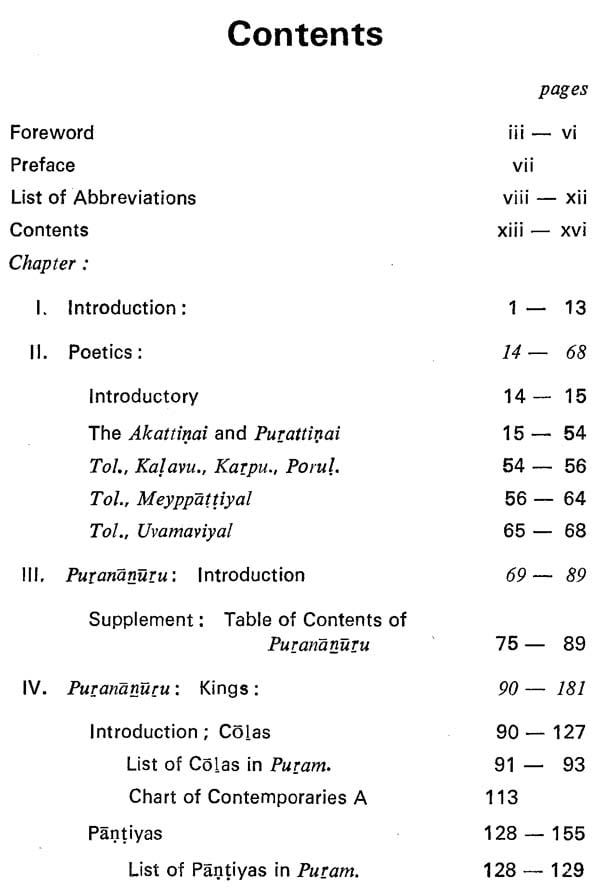 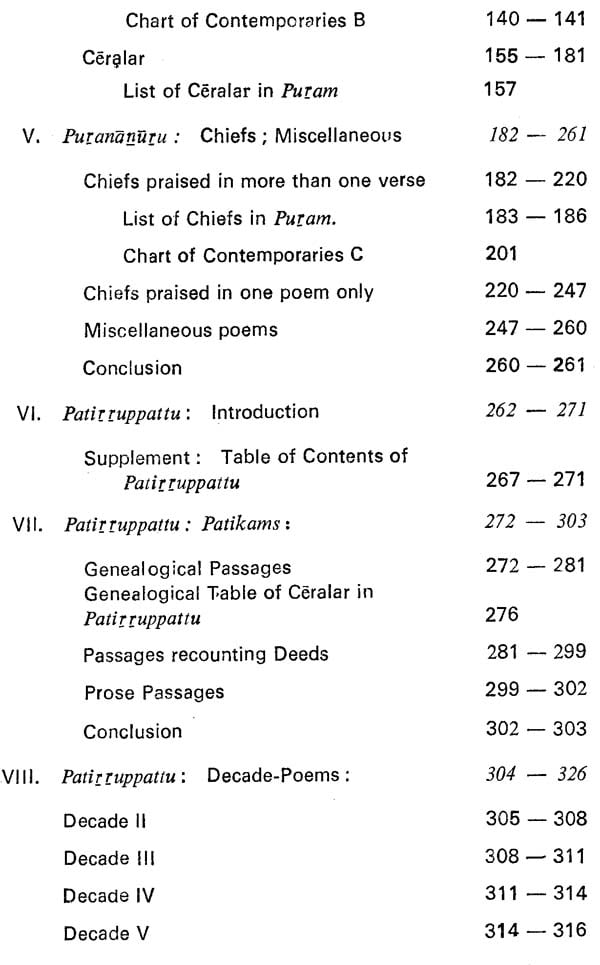 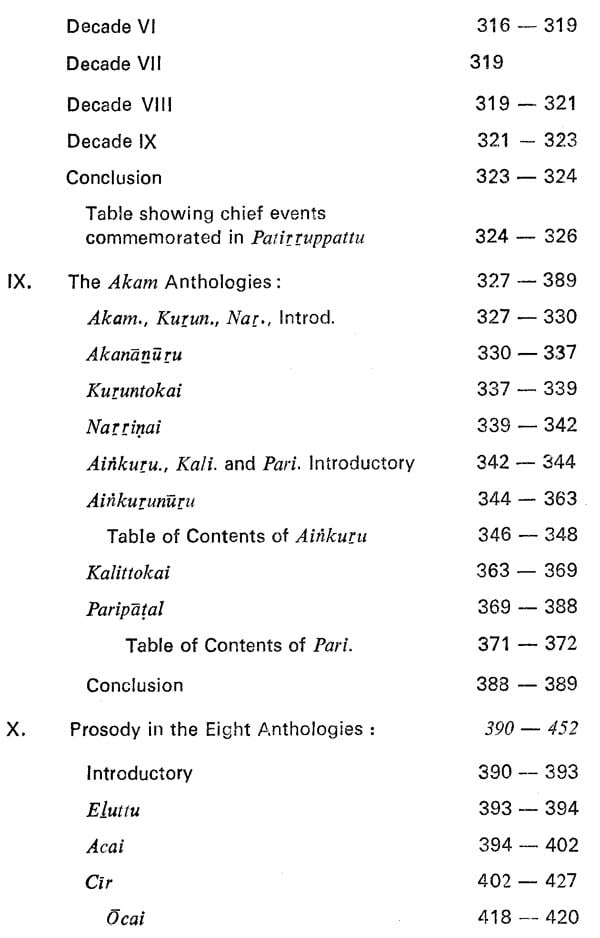 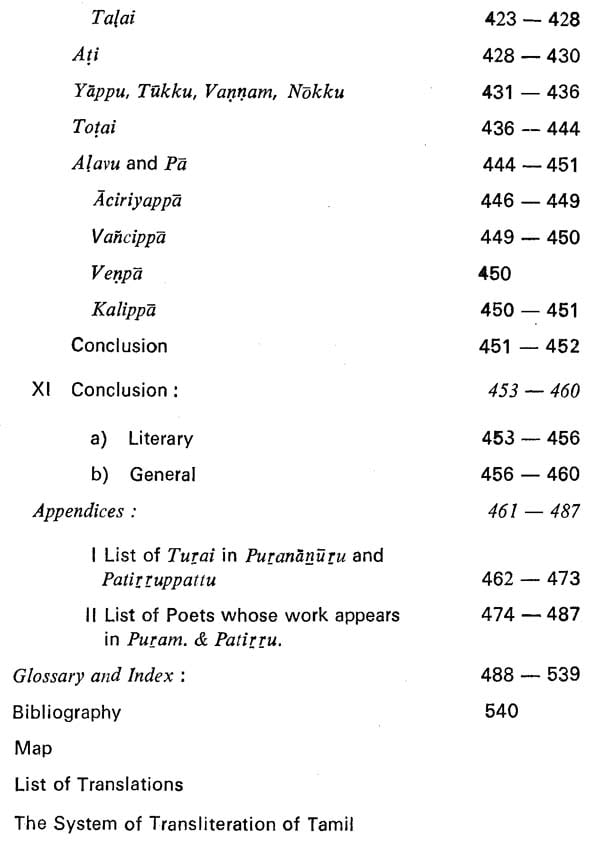 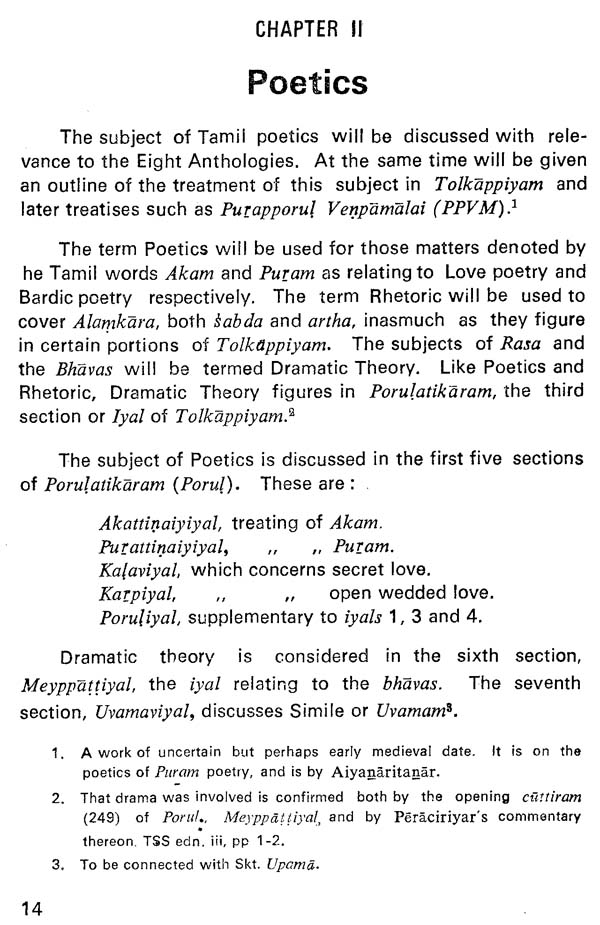 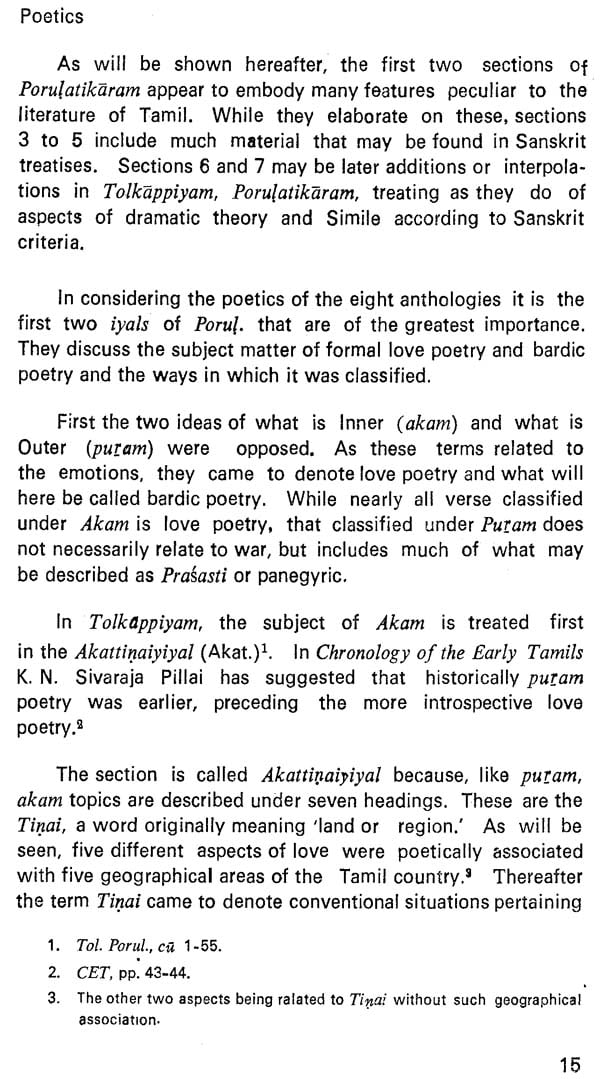 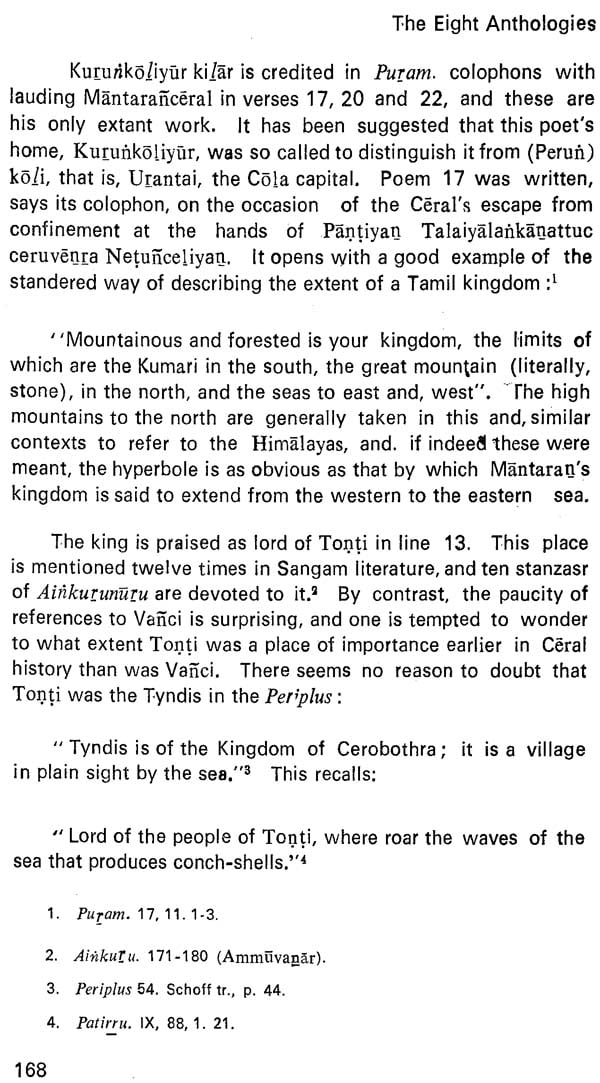 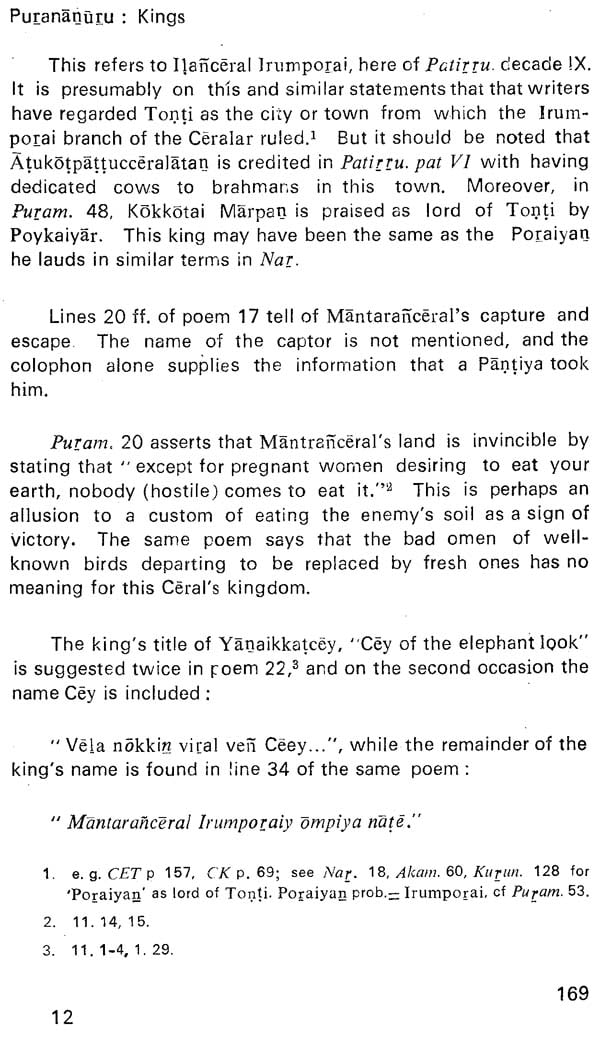 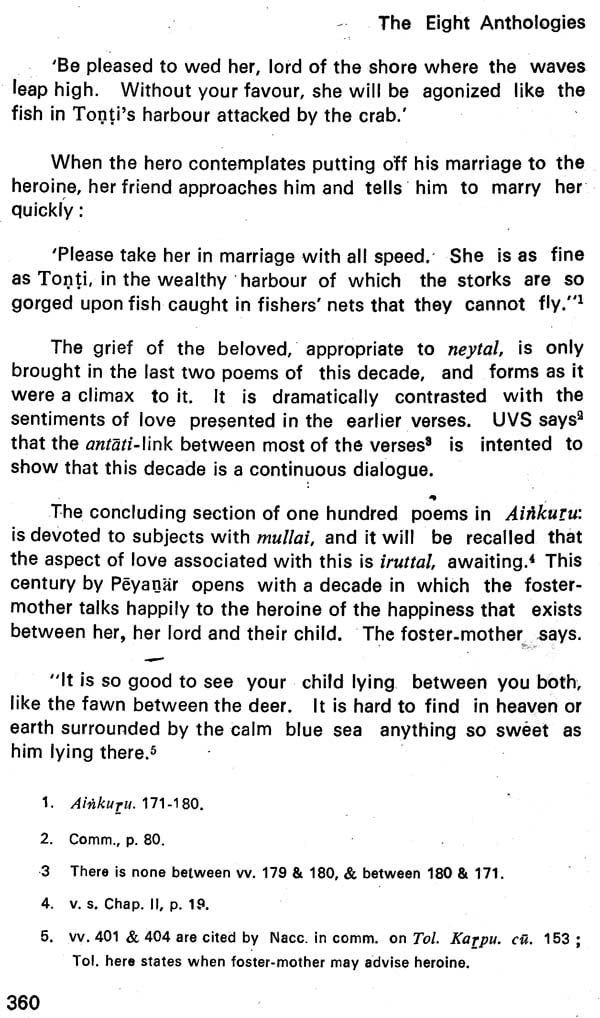 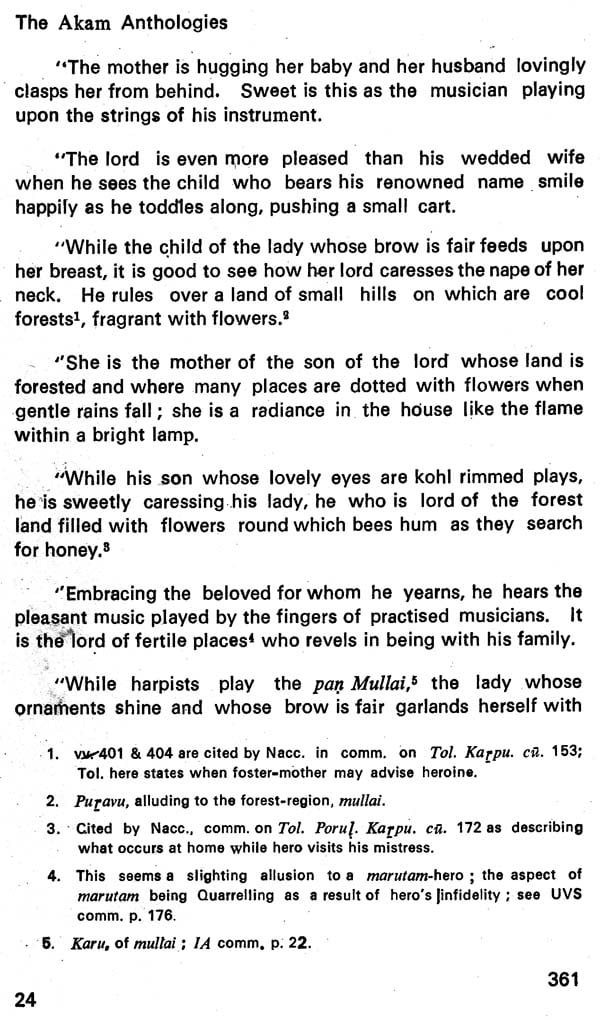 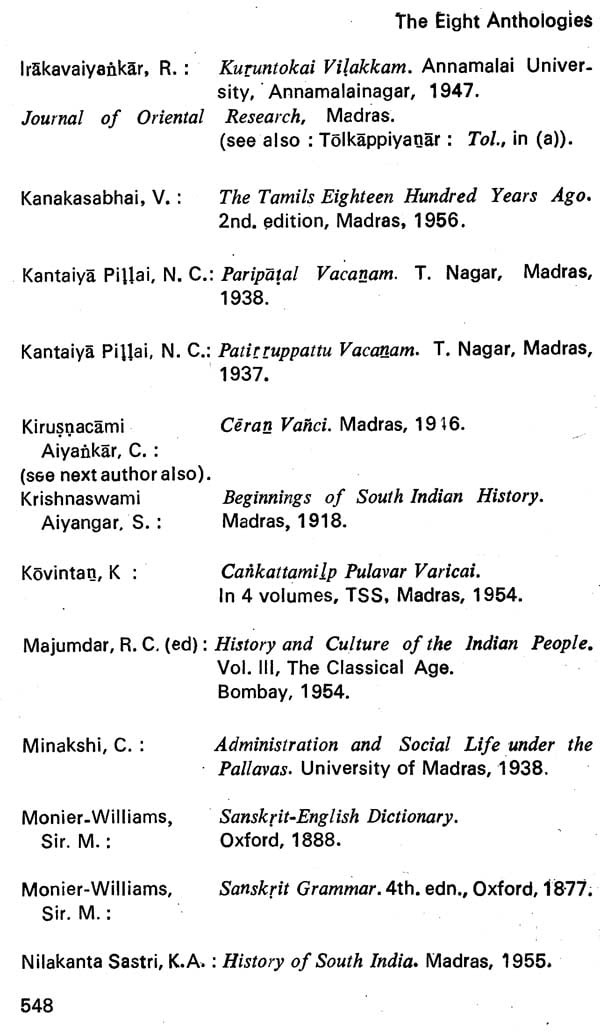 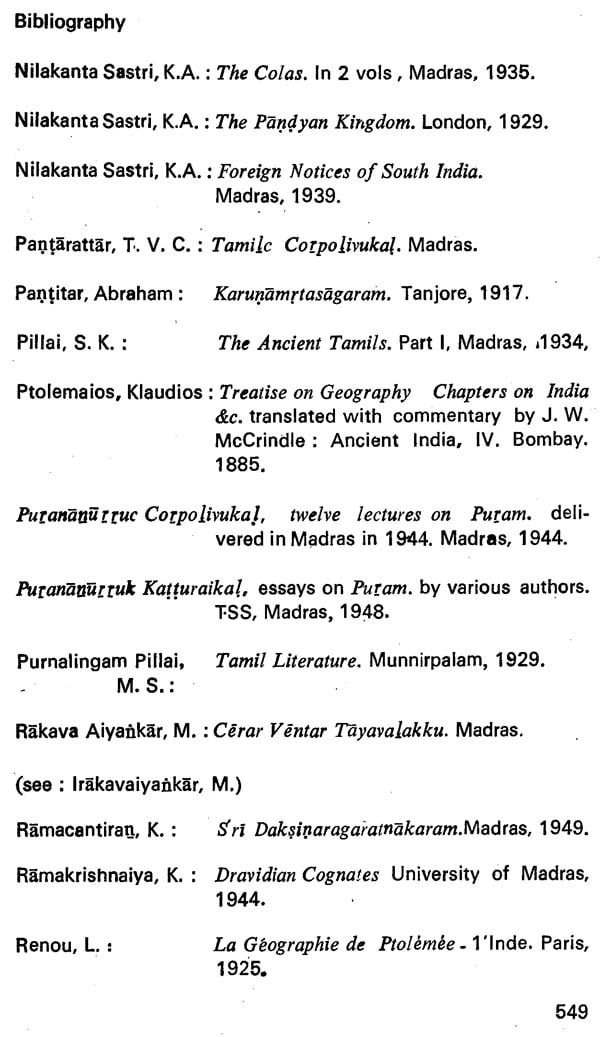 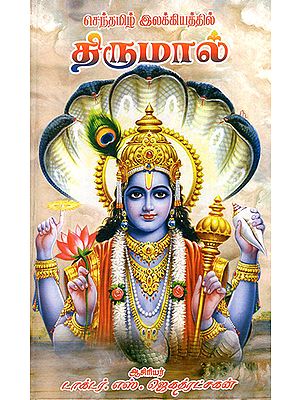 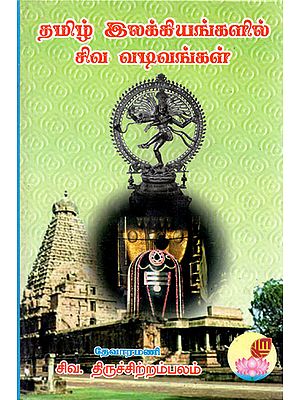 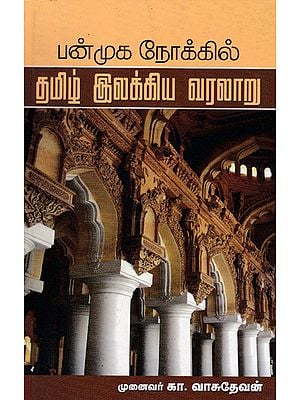 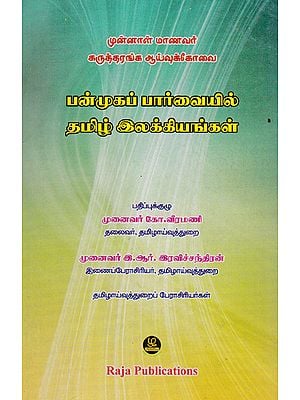 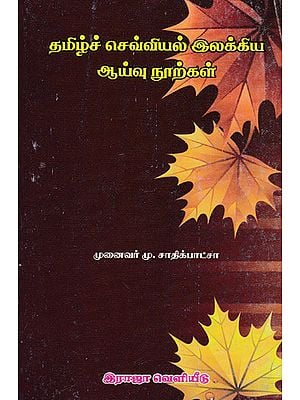 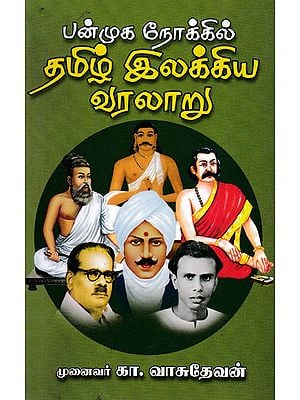 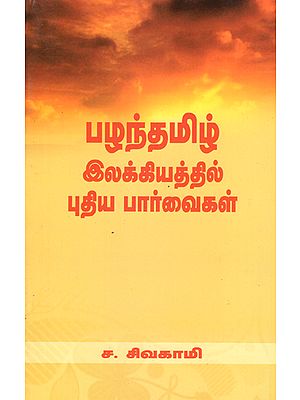 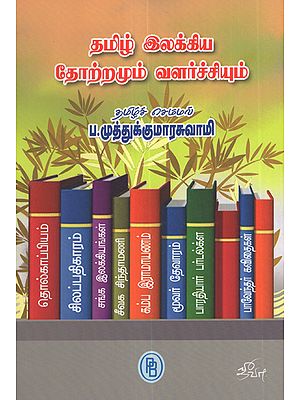 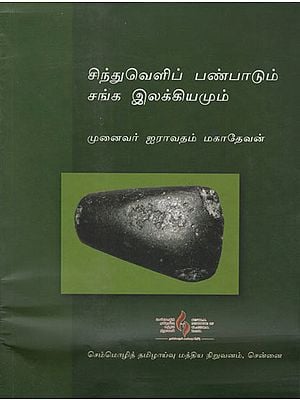 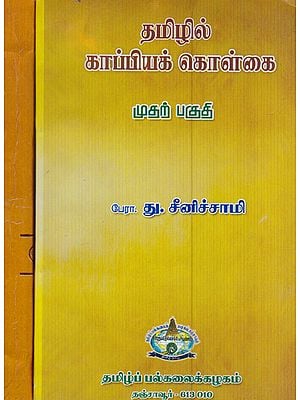 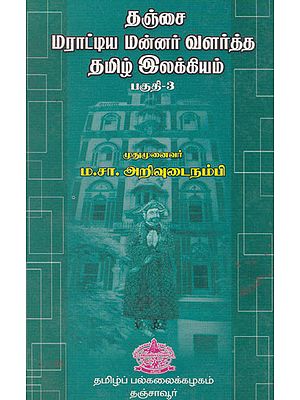 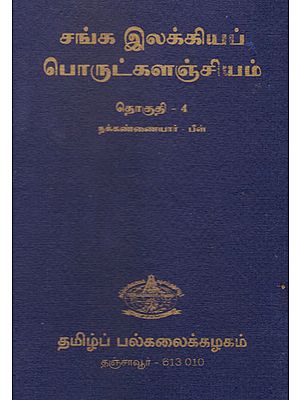 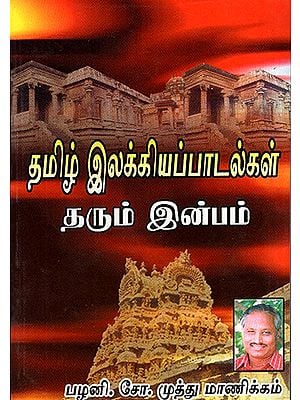 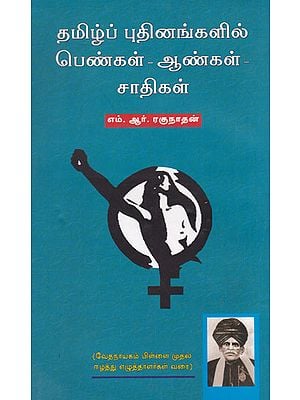 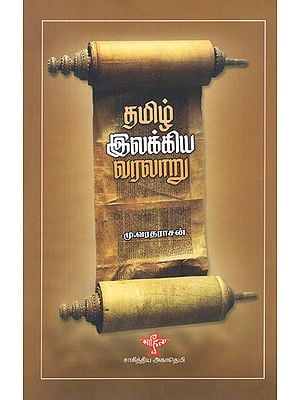