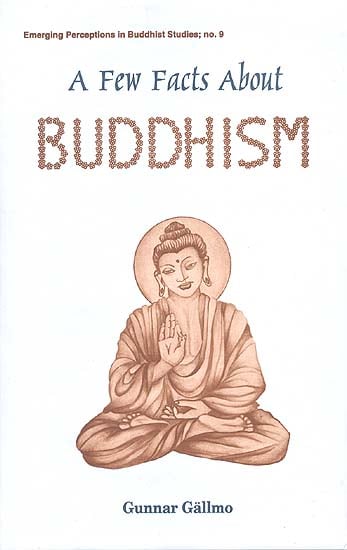 Today, when political ideologies/'isms' are crashing down and when, at the other end, the great monotheistic religions are trying to survive by turning their backs on logical thinking and intellectual consistency, it might be worthwhile taking a look at the 'alternatives' that by-pass the lopsided views of both materialism and idealism - the alternatives that do not have to explain how an omnipotent and all-benvolent God can permit evil, nor how human barbarism can persist doggedly in a progressing world society. And among these alternatives, Gunnar Gallmo rediscovers the oldest existing world religion: the first historically documented case of international (or perhaps non-national) thinking, a teaching that way, more or less, directly or indirectly, positively or negatively, have influenced all later religious, philosophical and political teachings: Buddhism.

From the vast corpus of the oldest preserved texts, Gunnar Gallmo marshals facts around Buddhism - quintessentially, authentically. His book is a well-knit, at once compelling presentation of the Teacher (the Buddha), the Teaching (Dhamma/Dharma), and the Taught (the Samgha/the Community) throughout the 2500-year-long history of Buddhism: first in India, then in Asia and, finally, today in the world. And since Buddhism is a religion with an actual historical personage as its founder, the author tries to explore how the Enlightened Master's original teaching underwent a change in later tradition, and how the differences between the two have cropped up.

With a glossary of Pali/Sanskrit terms and highly significant bibliographic references, this treasury of facts about Buddhism is bound to fascinate scholars and general readers alike.

Gunnar Gallmo was born, in Sweden in 1946, in an actively Christian family, but converted to Buddhism during his student years: in 1968. Ever since, he has had an active involvement with the Buddhist movement of his country.

A graduate from the Upsala University, with specialized interest in Comparative Religion, Gallmo lives in Stockholm, while working mainly as a literary translator and free lance writer.

Introduction When studying the three great world religions - Buddhism, Christianity, and Islam - it is important to make a distinction between teaching and tradition. All three were founded by historical persons. Thus, they each have an original doctrine. To know exactly what this original doctrine was may be difficult today, since neither the Buddha, Jesus, nor Mohammed left any written records when they passed away. Still, it is a fairly certain historical fact that such an original doctrine did exist. This is a difference between founded religions on one hand and on the other hand ethnical religions, such as Judaism, Old Greek or Old Norse religion or Hinduism. The latter don't have a specific founder. They have grown spontaneously and without any kind of plan in a collective context. If an ethnical religion has at all got a more or less coherent doctrine, this has developed relatively late. This book is dealing primarily with the Buddhist teaching, as far as we know anything about it through its oldest preserved texts, and only secondarily with tradition. Buddhist terms often have two parallel and similar forms, one of which is in Pali (a Middle Indian language closely related to the dialects probably used by the Buddha himself when teaching) , and the other in Sanskrit (a standardized Old Indian, at the time of the Buddha and after it used only by learned circles) . In the following text, the two forms have been separated by a slanting line (I), with the Pali form before and the Sanskrit form after. Sometimes you have to be careful with the Sanskrit form, since the same word may be used in Hinduism as well, but the same term does not necessarily mean the same thing in the two religions. In some essential aspects, Hindu and Buddhist thought are very far from each other. It is important not to confuse them, as done by many Westerners (and Hindus). At the centre of Buddhism are the three Jewels: the Buddha (the Teacher), the Dhamma/Dharma (the Teaching) and the Samgha (the Community, the Fellowship, the Taught). Most important of these three is the middle one, the Teaching. As Buddhism sees it, the Dhamma is a method for getting to know reality such as it really is. The Buddha has his value as the person who has made the Teaching known at a certain historical time, but he is no prophet - Buddhism doesn't believe in revelation. The Samgha also has a great value, because it makes a mutual support possible between those who are walking the Buddhist path. The Buddha and the Sarhgha are historical phenomena, but the Dhamma is independent of history. The historical expression of the Dhammais the Sasana/ Sasana, which means 'message' (same as Greek angelion in euangelion, 'good message', the Latinized form of which in several languages means' gospel'). The history of Buddhism is carried on by the Samgha, the Buddhist community in the widest sense to the word.
Sample Pages 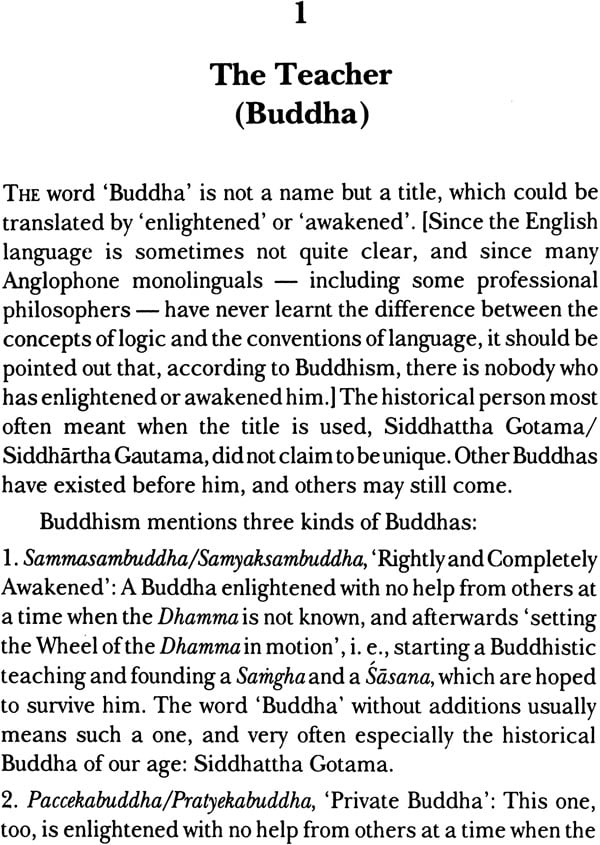 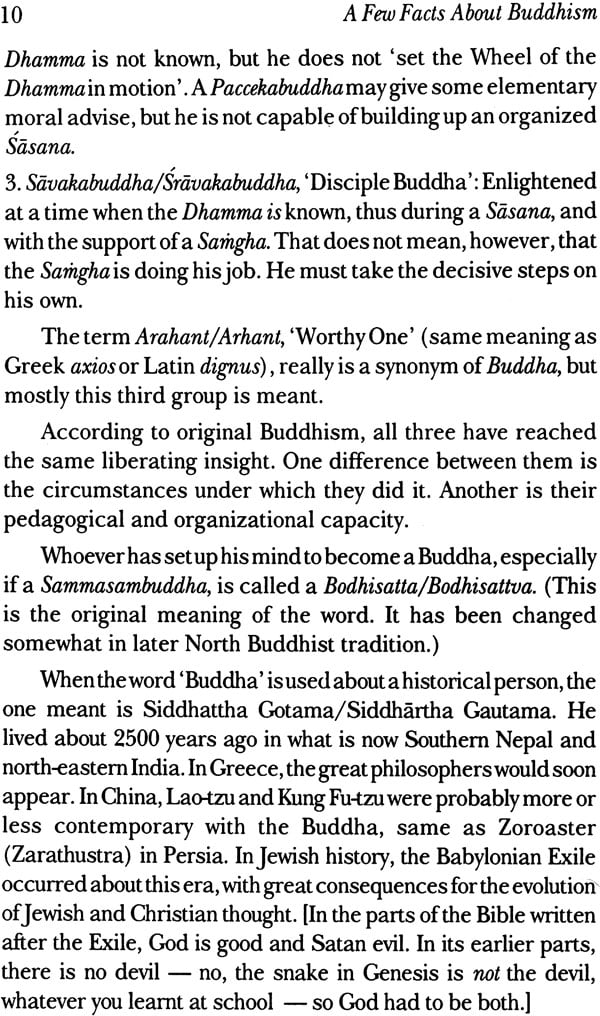 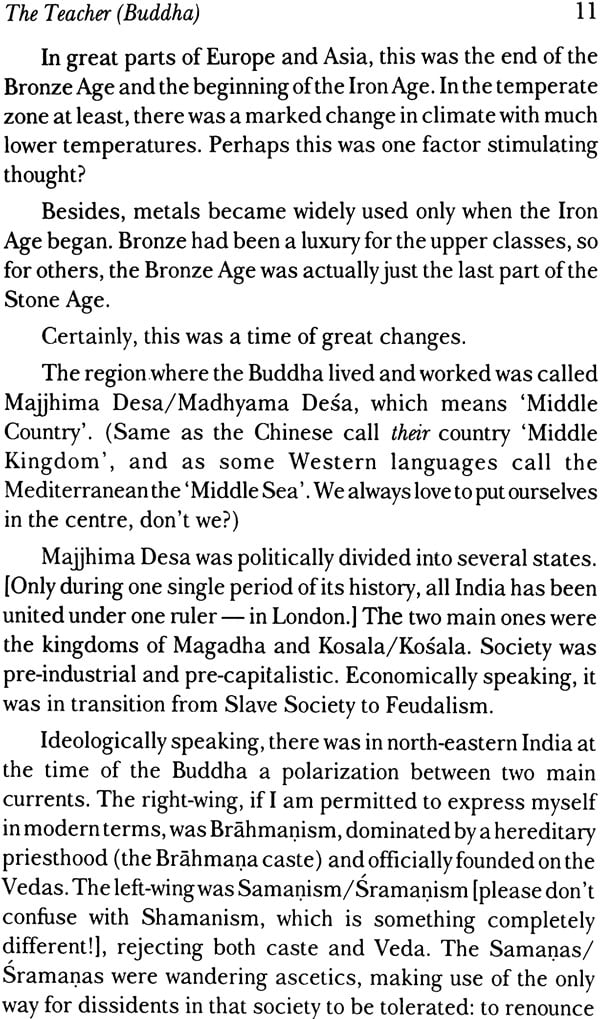 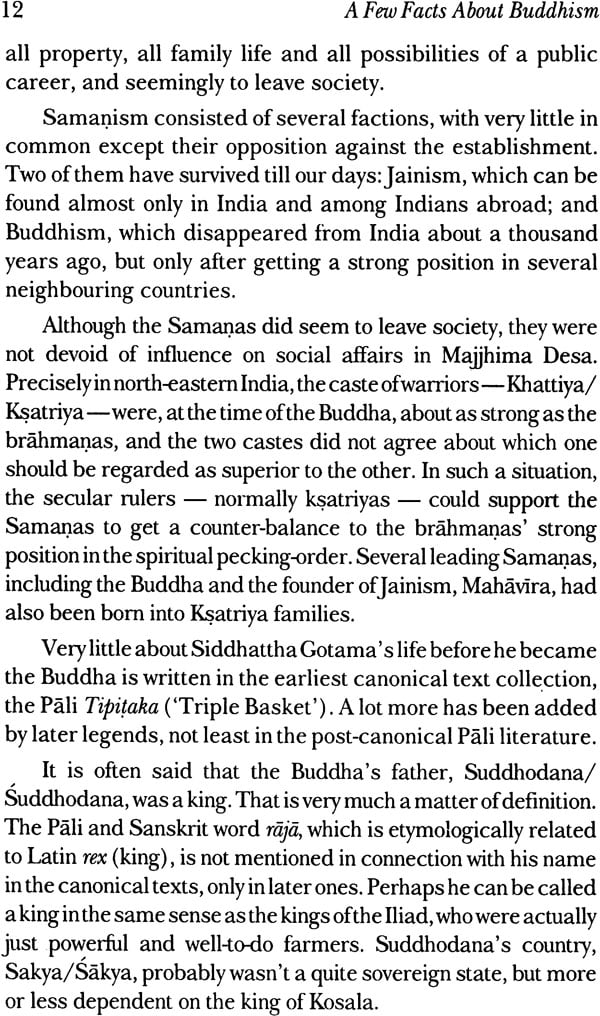 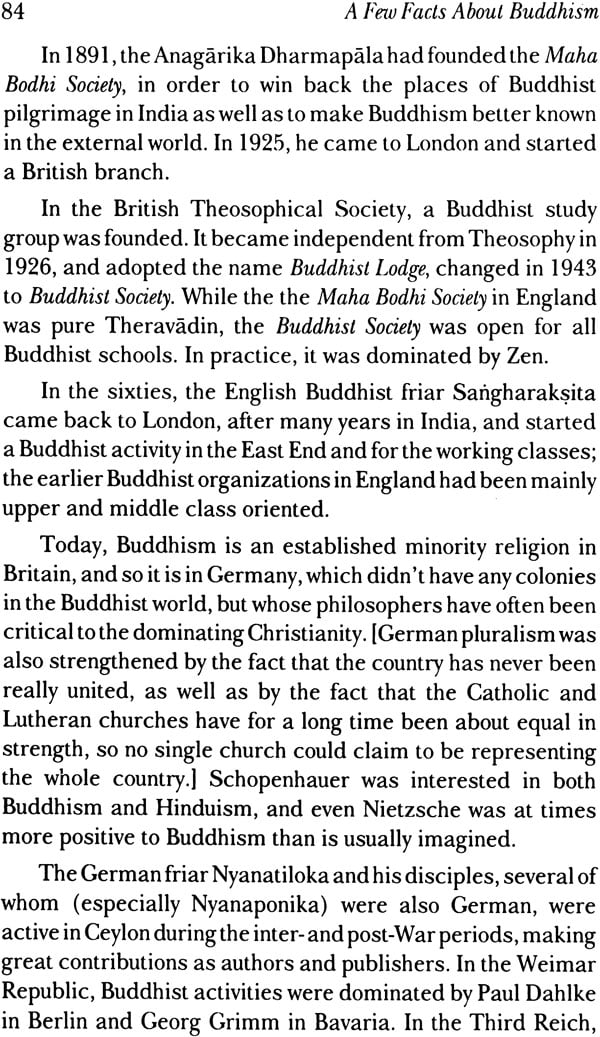 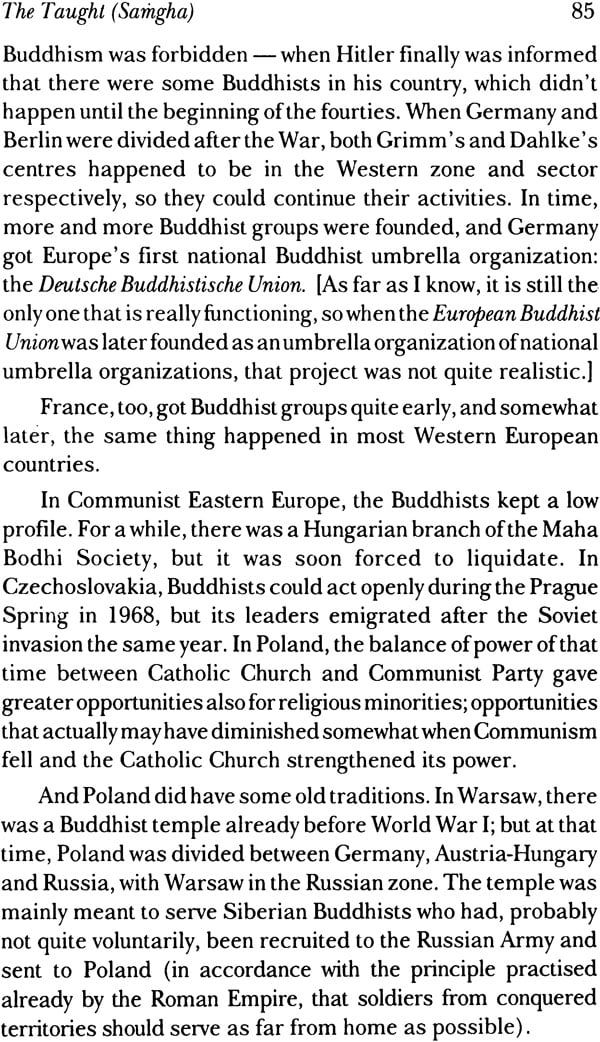 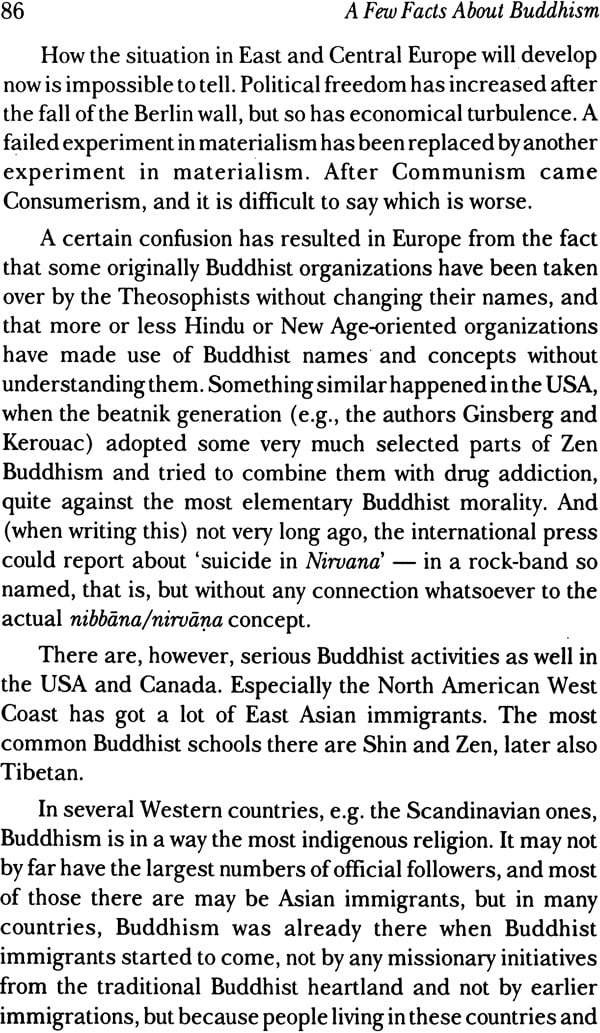 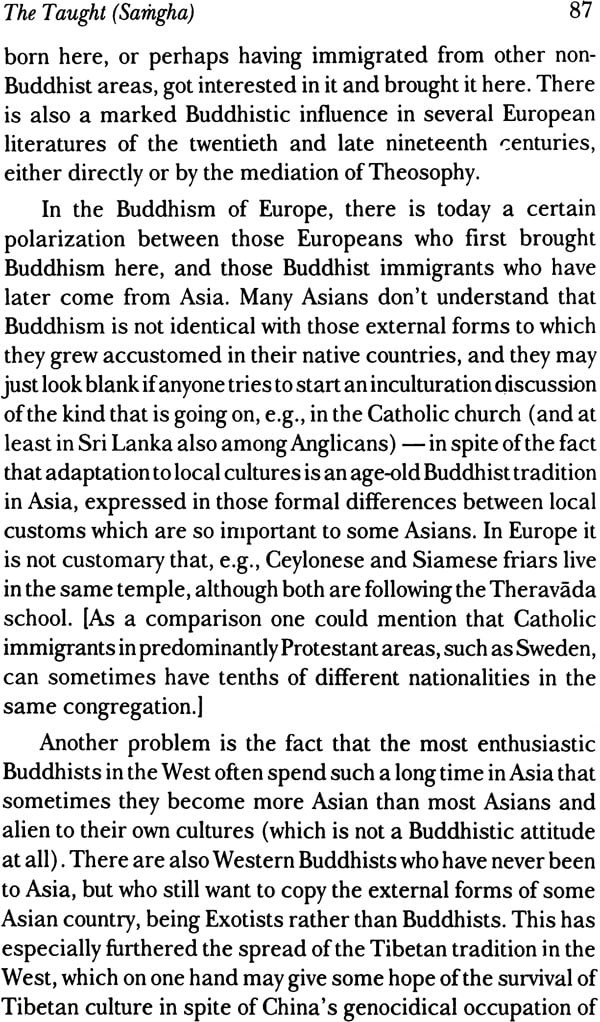 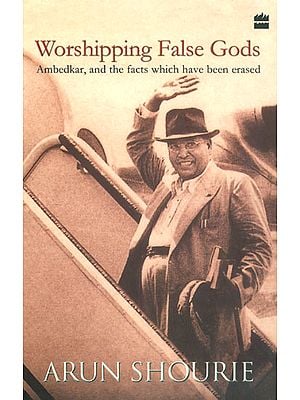 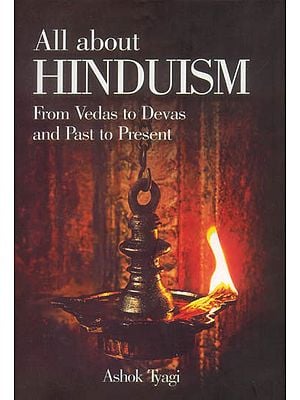 Buddha’s Not Smiling (Uncovering Corruption at the Heart of Tibetan Buddhism Today)
By Erik D. Curren
$25.50
FREE Delivery
$34  (25% off)

Ecological Responsibility: A Dialogue With Buddhism (A Collection of Essays and Talks)
By Julia Martin
$18
FREE Delivery
$24  (25% off)

Tibetan Buddhism: with its Mystic Cults, Symbolism and Mythology
By L. Austine Waddell
$30.75
FREE Delivery
$41  (25% off) 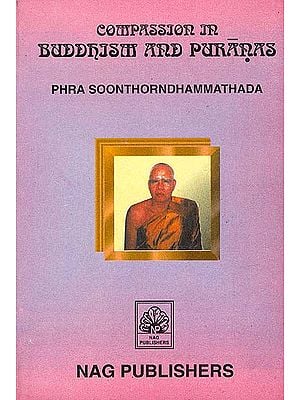 Compassion In Buddhism And Puranas
By Phra Soonthorndhammathada
$23.25
FREE Delivery
$31  (25% off)

High Religion A Cultural and Political History of Sherpa Buddhism
By Sherry B. Ortner
$23.25
FREE Delivery
$31  (25% off)
Add a review
Have A Question